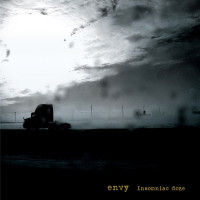 A reviewer can really appreciate a band like Envy. They make our lives easy. By continually putting out excellent music with no strings attached and no gimmicks whatsoever, Envy have turned themselves into one of the most well-respected rock acts around, appreciated across the board by critics and music lovers alike. I have no doubt that Insomniac Doze will continue to improve upon this band's already fantastic legacy.

Insomniac Doze, as the album title, song titles, and cover art suggest, is a different beast than its predecessor, the behemoth A Dead Sinking Story, already regarded as one of the greatest screamo albums of all time. Envy's new release takes the formula from that album and builds upon it even more, tightening their approach to their already unique take on the genre. This album actually feels even more epic than A Dead Sinking Story, and shows a band really coming into their own after the hefty transition from All the Footprintsâ¦ to A Dead Sinking Story. This time around, the band has chosen to expand upon the more post-rock pieces of their music, creating dreamy atmospheres and hopeful overtones. The majority of Insomniac Doze is played in this vein, with much more emphasis on Tetsuya Fukagawa's impeccable singing and airy spoken word pieces. In fact, the album kicks off with sung vocals instead of the traditional full-on screaming attack. Fear not, however, as this is still largely an Envy record: the heavy parts are still gigantic and as intense as ever, if not a tad more restrained without sacrificing any of the quality. That's a key concept on Insomniac Doze; nothing ever seems forced, and there's not a single moment of overkill, even in the more epic, ten-plus minute tracks like "Crystallize" and "The Unknown Glow." This album flows with the best of them.

As fantastic as A Dead Sinking Story was, you couldn't help but feel like it wandered on at times. The connection between the heavy and the soft parts was occasionally awkward, with no link or common ground between the two. This is where the band's newfound expertise in post-rock comes in; it no longer feels like "heavy parts" and "soft parts," but rather it feels like a single piece progressing, expanding, and climaxing. You can truly hear the relation to the preceding phase of a song when it decides to switch gears; there's no "cut and paste" thing going on here, as everything, once again, flows. The band once again promotes "beauty in repetition," but it feels warranted and welcome. The final two tracks, "Night in Winter" and "A Warm Room" (the band does a great job conveying moods with the song titles) are almost straight post-rock, but it ends the album on a fantastic note with the final climax, a barrage of screams and percussion. My one complaint is that sometimes Fukagawa's spoken word is a little overdone and sometimes seems haphazardly thrown into the mix, lasting a little bit too long, as it appears in every track, predominantly in the first "single," "Scene." Aside from that, everything falls into place.

While some might say that Insomiac Doze isn't a huge step forward from A Dead Sinking Story, I would beg to differ. The band is still playing how they've always played, and there's not too much of a departure in sound either, but I'm amazed at how tight the songwriting has gotten. Envy has harnessed their raw power and channeled it into seven tracks in a little less than an hour, expressing restraint and beauty every bit as much as pure brutality and intensity. The band has married the two opposites, creating one haunting and explosive sound. Needless to say, I'm absolutely floored.

The Draft: In a Million Pieces