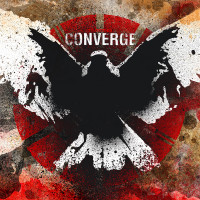 Since solidifying themselves as the champions of underground hardcore over ten years ago, Converge has steadily re-introduced new standards and continuously raised that bar as to what a can be expected from a metal-influenced hardcore band (let along any four-piece making music).

With No Heroes, Converge has accomplished what can be the biggest challenge to any veteran band -- they've created an album that will both bring in new fans and give old fans plenty of reasons to call this new work their favorite yet, or at the very least provide a few essentials for any Converge mix-tape.

Converge no longer has to establish themselves as being at the top of the chain when it comes to hardcore -- they already did that with Jane Doe. Through every release between Halo in a Haystack and 2004's You Fail Me, the Massachusetts quartet has developed their strongest attributes and expanded their sound. Beginning with Jane Doe and nearly perfected on You Fail Me, Converge brought a sense of depth to their songs that was largely unprecedented before them and still unmatched by their peers.

So where does No Heroes fit in? The first five songs on the album don't give you a chance to even consider such a question. Unlike You Fail Me's drawn out introduction, "Heartache" has absolute shredding through the speakers in an all-out assault. Things don't let up through the first five songs, with none reaching over two minutes in length. Jacob Bannon's scream is as blood-curdling and cringe-inducing as ever. "Rebel or regret who you are and who you claim to be," screams Bannon on the title track. Such a statement is a somewhat accurate representation of the theme on No Heroes with Bannon often expressing himself with knives drawn. The rest of the band -- most notably guitarist Kurt Ballou -- will leave you wondering how they'll ever pull these songs off live, or how such structures were construed in the first place. On You Fail Me Converge introduced a sense of doom through wandering guitar notes coming out of nowhere and quickly disappearing. This sound comes up even more so and with more force on No Heroes and is a welcome development.

Things let up slightly through to the nearly ten-minute would-be epic, "Grim Heart / Black Rose." The track will likely have you checking to make sure that you haven't accidentally hit shuffle and moved on to Black Sabbath. It isn't all bad, and it certainly picks up towards the end, but the slow tempo and classic metal vocals seem out of place in the middle of the record. That said, if placed at the end it may not be played through its entirety by a listener who's already been pummeled by the band. It might be better to think of it as more of an intermission that leads to the second half of the album, which features more expansive, but just as violent offerings such as "Trophy Scars" which are a few of the very best songs on No Heroes.

Back in July, Converge posted an introduction to the theme they planned to present on No Heroes: "These days, cowards outnumber the heroes, and the begging souls outweigh the calloused hands of the hardest of workers. Both in life and in art, the lack of passion is sickening, and the lust for complacency is poisonous. This album is the artistic antithesis of that sinking world; a thorn in the side of their beast. It's for those who move mountains one day at a time. It's for those who truly understand sacrifice. In our world of enemies, we will walk alone..." There's no question the album takes such a stance, and it's one that's largely unmovable.

World Burns to Death: The Sucking of the Missile Cock