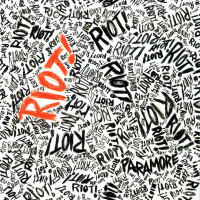 Okay, so Paramore were sitting in the Fueled by Ramen corporate offices looking at different ways to make their latest record generate the most profit. After reviewing many possibilities, they developed Riot!. Here is an excerpt of their discussions:

"So guys, you know this record is going to sell no matter how bad it is, right?"

"Oh definitely. I mean, we could just fill this record with tons of boring, boring balladsâ¦ Our predominantly female fanbase will eat it up."

"Yeah, sure, but that would be boring, and we'll actually have to PLAY that nonsense if we do that."

"True, but you know people are expecting that, right?"

"Well, personally, I think we should totally release a pure pop-punk record; that is what's big right now, and really, we're on Fueled by Ramen, and they're pretty much in charge as far as pop-punk goes right now. Maybe toy around with some kind of weird outside influence like Panic! At the Disco or Cobra Starship. Kids love that kind of thing."

"That's quite true... I got it! Let's throw some random mariachi in. Surprising, yet totally embraceable. Cool, huh?"

"Damn, that's slick. But we have to make sure at least half of our record is ballads. I mean, we really would be missing a great chance to totally exploit our fan's taste otherwise."

"Oh, okay. But is Hailey really down with being Seventeen Magazine fodder?"

"What's the difference between 'punk' webzines posting her birthday and Teen People doing the same?"

"Yeah, really, you see the way those guys come on to her every night at Warped Tour?"

"Totally. Which reminds me, our lead single should totally play with that a little. We need it to play on male fantasy."

"So the plan is, stupid 'experimental' moments, lots of pop-punk, lots of lame balladry, andâ¦probably a lot of wailing on Hailey's part, because really, this band IS her, right?"

"Yeah, you guys can probably just take the back seat on this one. Do you guys even really matter, anyway?"

"Ohhh! We could inject a sense of faux-rebellion into the record, too! Kids always love that."

"Alright, now all we have to do is get down to business, and record this record. Man, we're going to be so rich. TRL here we come!"

The Sound of Animals Fighting: We Must Become the Change We Want to See DVD / Tiger & the Duke [reissue]