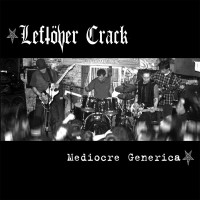 Warning: This review is long, dragged out, and loaded with lyrics and weird links. Do not read if you are offended by any of the following: fucking cuss words, sarcasm, satanism, crack rock, or genitalia. Remember, Jesus loves you, even though he was a shitty carpenter that died nearly 2000 years ago. Oh yea, don't be afraid to click all the links, they all open in a seperate window as not to interrupt your review reading.

This album is fantastic, just fucking fantastic. I honestly think Leftover Crack will surpass the shadow of Choking Victim(even though it is basically the same band with a different drummer). First off, this album was supposed to be named "Shoot The Kids At School". To all you fucking wankers who take offense to that title, I suggest you check out this link. After properly digesting the meaning of the word sarcasm, you can read this essay from Ara Crack(LoC drummer). Make sure you keep the definition of sarcasm in mind while reading it, my friends. This is the punkest fucking album I've heard in a while, but enough of this hogwash... onward!

The first track is "Homeo Apathy". This song shreds. These lyrics pretty much sum up the feeling of this song:
"everything i do in life slowly takes it's toll // the bad decisions that i make seem out of my control // and growing up in NYC it never was much fun // ther fumes are like a pack a day & buildings block the sun // fuck the sun that cloud is coming down"

Next is "Nazi White Trash", I love this fucking song. The title is more rad than your dad. This track has a good "Choking Victim" sound to it. The lyrics are about... well, nazi white trash. Here is a verse:
"ya have that special something that "sprite in you appeal" // ya think that we all love you but this is how you make us feel // yer sweaty, fuckin ignorant A product of conditioning // eugenics, social darwinisim, an excuse for yer positioning // yer crass & evil ways are all that got you there today // i hope you get shot, and this is what we say"

Atheist Anthem is the kind of song that reminds of me of butterflies and warm summer days. I don't really know why though. This song, as your probably guessed, you genius you, is about Atheism. Atheism is the best thing since perferatted paper towells. And much like the greatness of said paper towells, this song's lyrics kick ass.
"Nuclear Apox spells your doom // like the t.v. in yer living room // each bomb kills a million dead // it melts your skin and implodes yer head // And now you get yer judgement day // You think you'll float up then away // But yer guilty just like everyone // You turn to ash when the burning's done"

"The Good, The Bad, And The Leftover Crack" is a weird song which reminds me of The Cramps if they were sippin' on a dragon and smoking some rock. That means I like it. Yeah, it's good.
"And in the morning, we'll ride into your town // we're gonna sleep all day & when the sun goes down // we're gonna go to church & then we'll burn it up // and then we'll drink a fuckin' toast from a dixie cup"
This song makes baby Jesus cry(well, maybe not)). And now for the next song...

What do we have here? Why, it's "Gay Rude Boys Unite". The only thing better than an anti-nazi song is an anti-homophobia one. The lyrics are too good in this song, so bare with me as I post them all. Read them, you fucking asshole, maybe you'll learn something:

Unity! HA! yer such a saint today
you may be anti racist but then you're anti gay
you may be ignorant from a lack of education
but if it's sympathy you see you seek
you better turn to another station

Chorus:
Intolerant society rears it's ugly face
you're turning your native music into a homophobic disgrace
the gay ones, the straight ones, the white tan yellow and black
gay rude boys and girls, we're gonna take that dancehall back
we'll take it back!
because without respect there's gonna be nothing left

2000 triple zero stand up and take a look around
this ignorant fucking shit shouldn't happen in any town
so come on leave the closet and on your way out grab a bat
cuz there's a battle to be fought and the prize is fucking phat
autonomy from ignorance there's got to be a better way
but the racist, sexist homophobes and piggies gotta pay
but right now you got to get out of your fucking seat
and jam down to the faggot rythm's of that crack rock steady beat

Like whoa! Anyhow, the next song is the organ-ified interlude. It gave me a boner, just like your grandfather.

The next song is the Ã¼ber-rockin' "S.T.I."(or stop the insanity for you acronymphobics). Yes, it is true, this song is cooler than Vanilla Ice, yet more abbrasive than the sand paper I used to try and remove my genital warts.
"we have the // white & blue & bloody red // stars and stripes for the mis-lead // convenince stores with neon lights // where burger kings rule tainted nights // stop the insanity let's end humanity // kill all earth's residents let's start with the presidents ".

"Crack City Rockers" is probably the catchiest song on Mediocre Generica. That isn't to say it's all that soft of a song, because it's not. It is, however, about being homeless.

"no panhandling they say it isnt a job // oh but i disagree ya ignorant slob // but there may come a day, when yer found down & out // and the hateful replies will fill ya with doubt // ya might be a skinhead ya might be a punk // just give us a quarter so we can get drunk // thank you for shopping and please come again"
another healthy helping of lyrical love:
"i got assualted by officer friendly // on the 4th of july stick a needle in my eye // i said "i didn't do nothin'" & "whats this all about?" // he said "resisting arrest" as his pulled his baton out // spitting bile and blood as they left me for dead // my thoughts leaked out through a fissure in my head // and the last one left is: is my bad luck running out?"

The reviewing process has become more dull than Al Gore at a funeral, so I think I'm going to have to speed things up. Burning in H20 is a rad song. Why? Because I fucking said so. Just peep dese lyrics yo:
"you're obedient dogs, greasing the cogs // running the machine // how many lives are lost in the gears // to cover yer crimes over all of these years?"

With The Sickness sounds almost like a F-Minus song. This is, you guessed it, a good thing. It's short and hard-fucking-core. Here are the complete lyrics:
"The I.M.F, The N.S.A // puppets are planted by the CIA // the new world order of a new decay // it all goes to shit as the ignorant pray // and bullets and bombs kill all // you're to blame as you fall"

OK, now we have Born To Die. This song was originally written and recorded by Choking Victim. It has been revamped for this record, and I can safely say it is much better than the original.
"Born to die and you get to sit and watch yer t.v. set // believe the lies before yer eyes credit cards & apple pies // 50 stars to blind yer eyes 13 stripes to hypnotize // free thought is gone you'll never see yer just a pawn"

It's time for the last song(thank Satan). It is named "Gay Rude Boy Instrumental". Rude? I'd say so. Gay? Well, I highly doubt it has intercourse with instrumentals of the same sex, but you never know. This track is filled with happy-go-lucky toe-tapping goodness. Perhaps that's the kind of gay it is.

For more insight into the bums in Leftover Crack, check out their web site leftovercrack.com. Also, read the interviews on their site. These guys give the best interviews around. Oh, and to anyone who fails to see through the Satanism... it isn't real. None of these guys believe that there is an entity named Satan, nor do they worship him. The same applies to God from what I can gather(unless they speak of burning churches and crucifixes in a good way). If you don't like this album, there is honestly something wrong with you.

Oh yea, I almost forgot. This album was released on September 11th. The weird part(although obviously coincidence) is the lyrics to the song Atheist Anthem. Check out this passage:

When the greed of man is not appeased
All will rot sick and diseased
Once again the fallen towers
The Tortured death of every hour
And at the toll of the final bell
You lead the righteous down to hell
When all the world is dead by dawn
All I ask is bring me along!"
Odd indeed.