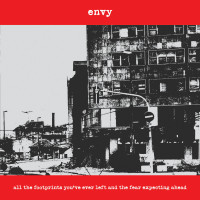 Listening to the Envy discography is a daunting, but ultimately rewarding task. For well over a decade, the Japanese act has been shifting and contorting pre-conceived notions of hardcore music, pushing it to its most experimental reaches, whether that be the violent cacophony of the early-`90s San Diego scene or cascading post-rock. Bet you can't name another band who sounds like Saetia and Sigur RÃ³s in the same song. However, the real challenge lies in the fact that they devise this dynamic in prolonged, extensive ways, their full-lengths routinely clocking in at close to an hour's running time and containing solely Japanese lyrics. But listening to the slow, expertly picked buildups from guitarists Nobukata Kawai and Masahiro Tobita lay the foundation for Tetsuya Fukagawa's passionate screams are a sound for sore ears.

Temporary Residence Ltd. has now released almost the entire discography of Envy. Following 2006's Insomniac Doze and the more recent EP Abyssal, the label has reissued some major parts of the band's recordings. January, February and March has seen the respective re-releases of 2001's All the Footprints You've Ever Left and the Fear Expecting Ahead, 2005's Compiled Fragments 1997-2003, and the band's arguable crowning achievement, 2003's A Dead Sinking Story.

As far as the CD versions go, nothing much is different on these albums. Nothing has been remastered (though the vinyl releases received such a treatment), and the artwork generally seems the same. However, it's hard to draw criticisms towards TempRes here, as they seem to merely be giving this portion of the band's back catalog a much wider release than previously available. After all, some of the albums have never actually been in available in North America and/or released on vinyl. The recordings on the albums are plenty loud enough, too, putting aside the need for a new sonic umph.

All the Footsteps is a promising mid-career effort that began to noticeably strip away the rawness of the band's earlier material and embrace warmer, more thought-out textures. Fukagawa still screams manically, though, and often when he does it comes with the full thrust of distortion and roaring guitars from his band ("Farewell to Words"). However, on songs like "A Cradle of Arguments and Anxiousness" and "Mystery and Peace," melodic murmurs act as a wonderful vocal dynamic, while the latter of the two definitely hints at the expansive nature that would come later for the band. The pounding "Invisible Thread" cuts into spoken word with a mass of swirling chaos that grabs the listener rather suddenly and doesn't let go for several minutes.

Quite obviously a mixed bag, Compiled Fragments spans six or seven years of odds and ends. However, "mixed" really only regards the recording quality and style, which varies some; it's still a very solid compilation with a number of wonderful moments. The band's split material with Yaphet Kotto and This Machine Kills, recorded in 2003, is obviously some of the best, with alternately shimmering and heavy guitars and ethereal atmospheres in both "A Far-Off Reason" and "An Adventure of Silence and Purpose," with Fukagawa's delivery perfect. It's interesting to compare a song like that to the fairly more straightforward hardcore nature of a track such as "Trembled," which derives from a 1997 compilation and is surprisingly closer in style to a band like Shai Hulud than their current comparisons. There's an unreleased song here as well: the 2002-era song "Connected Voice," which finds the band visiting the most extreme possibilities of their trademark soft-loud approach, and in breathlessly abrupt transitions.

A Dead Sinking Story is really where the band hit their stride, though. The album is a long, twisting adventure that requires some patience, but it's a sightseeing ride full of fog, mist and wonderment. Fukagawa spits every lyric with more conviction and passion than he has in the band's discography while guitars dip in and out of shallow pools to bombastic, towering settings, all highlighted aurally by a splendid recording job at Bazooka Japan Institute during a wintry 2003. Eight-minute opener "Chain Wandering Deeply" goes through a shapeshifting number of motions before the flawless, barely noticeable transition to "Distress of Ignorance," which begins with subtle instrumentation before bursting with Fukagawa's agonizing, desperate pleas ("Only on the days we cry, / we rip the times"). His vocals go through a number of very cool production techniques on this particular masterpiece, and the lyrics paint a mournful picture of communication breakdown ("Cannot connect each person's thinking. / Everything is ill-matched and awkward.") and relationship crisis ("Have faith in both erasing you out and loving you. / The origins play frightened in a small garden."). A listener might have already recognize the emotion and gravity of the songs, but when they learn what Fukagawa is actually saying, it should immediately establish a strong, endearing personal connection as well. Whether or not maligned to the heralded genres of "screamo" or "post-rock," A Dead Sinking Story, while a bit top-heavy, is easily one of the best albums the 21st century has thus produced in either category.

A vital band to the international punk/hardcore scene of the last 15 years, the highlights of Envy's back catalog have been given new light. Completists wishing to stock up should be in good hands; if nothing else, pick up A Dead Sinking Story for a devastating, heartfelt affair.