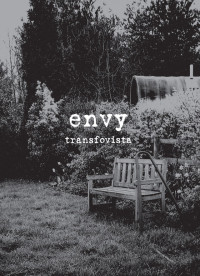 Much like Envy's music, the two-hour DVD Transfovista is hard to get a hold of or a feeling for, initially. When the promotional materials said that there would be tour footage, I expected that it would be selectable through the main menu. I was wrong -- I'd have to watch the live clips with the tour footage thrown into the mix. Like most tour footage, I assumed it would be throwaway gags of "look, we're in this city now" or maybe a history of the band. Again defying expectations, there's no introduction to the band -- you just go straight to the music, and other footage that didn't make the cut is in the mix as well.

If it sounds like a clusterfuck, well, it is, until about 45 minutes through when I realized that the hum of Japanese voices (no subtitles, even in the off-stage footage) was rather hypnotizing. I had a vague idea what was going on, but there was still a sense of wonder, as in, "Okay, what's going to happen next?", without attempting to throw in a full understandable narrative for the viewer.

The band's dichotomy between a deep wall of sound pull and melodic instrumental passages that are so good as to be doomed to a violent end makes an easy comparison to a boat adrift in a storm, waiting for the calm to break or just waiting out the thunder in the night, which is when the confusion stopped.

Here is an example of a half-art piece, half-live DVD. There are no complaints with the live footage (hell, my favorite is the shaking handi-cam one of what I assume to be a fairly green Envy playing a song that has a recognizable, even bounce-around-your-room-able post-hardcore melody), the new stuff is professionally done and the in-between material is not just glorified YouTube footage, though admittedly, the vocals can get lost in such tracks.

It's not a disc you can simply have playing in the background. Like the band's music, Transfovista requires your full attention for the full two hours for the experience to make sense. It's not a history. It's not a live DVD. It's a DVD from a band that's known for "grand soundscapes" (Temporary Residence's words, not mine), which means that sometimes, it's hard to get through. There will inevitably be points where you're wondering when, exactly, the nice-sounding melodic section is going to explode, since inevitably it must, and in those moments, Transfovista drags.

Despite that, it's an accurate document of Envy live, which, if you're a fan, and you haven't seen them, is the next best thing. Just know that occasionally, the DVD will go into art mode, and you're wondering where the live footage went, or perhaps the other way around. If you're a fan in North America, you should buy this -- the band doesn't tour here often. If you're a newcomer to Envy's music like I am, this won't be worth your time or money for a while.

It's got replay value, if only to figure out what exactly is going on in some scenes, and watching one guitar player after another smash their instruments for no adequately explored reason. It's got two lures: one that can hook a fan, and one that should hook the casual onlooker, though I doubt they'd buy it.