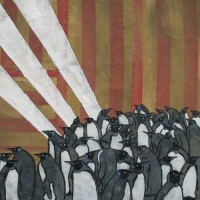 Long intro averted. The new Dillinger Four is here, and we're all stoked. C I V I L W A R begins and ends with Funk jams and "whoa"s over Paddy's growling basslines, without much variation in between. But it's the subtleties that matter here. For the past month and a half I've stopped conversations dead in my kitchen to make everyone listen in silence to the epic bridge on "Ode to the North American Snake Oil," and even ex-Fat Wreck fiends agree: It really does feel like summer in October, at least to them, which would have been a somewhat clever way to end this (long) sentence if I hadn't gotten the lyrics and song titles mixed up. No, I really did listen to this record. Honest.

"Fruity Pebbles" is a slow-paced elegy about lonely drunks, which stands out here even amongst the album's mostly mid-tempo arrangement. Funk's quest for seclusion from religion continues on the initially sparse and dreamy "The Classical Arrangement," which then segues into a more band-inclusive peak that also reaffirms his strong atheism and personal faith. Paddy's "Minimum Wage Is a Gateway Drug" may have been inspired by the band's inability to tour during Funk's selling of his house, but it plays out as the future centerpiece of a Fannie Mae and Freddie Mac Failure Mixtape. Does anyone else want to write about foreclosures and mortgages?

As far as current events go, "Minimum Wage" is as timely as the daily paper and as poignant as the stories that aren't being told on the news or during debates. "I lost my house, so what's in the bailout for me?" I guess C I V I L W A R is part of the early bailout package for the 20-something punx, so maybe we should invite our now-homeless parents over to chastise them for their irrational spending on fancy homes and fringe investments, and then offer a shared listen to a highly anticipated Punk Record.

They'll thank you when their pantry's bare.

Fucked Up: The Chemistry of Common Life