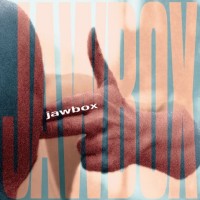 Can we come together as a nation and say, "Hey Mr. President! Jawbox ruled! On an unrelated note, no blood for oil!"? For those not down with the D.C. sound, Jawbox was a post-hardcore band from the early `90s. Helmed by former Government Issue bassist J. Robbins, who's unfortunately been in a lot of news articles lately in connection to his son's health issues, the group turned out four mighty fine studio albums (and a great odds-n-ends collection) before going bust. "Selling out" has always been a major talking point in the punk community; it's like our version of the abortion issue or something. It is in this sense that Jawbox is something of an anomaly: a Dischord-oriented band that not only got away with signing to a major label, but got better after doing so. A lot of folks like to talk up the band's third album, For Your Own Special Sweetheart (das Org even gives it a perfect score), but the band's best, in my humble opinion, didn't come into view until 1996's Jawbox.

Jawbox broke up not long after releasing their self-titled album, but at least they went out on a kickass note. While the group's Dischord years were all about grinding nonstop, Jawbox found the group experimenting with tempos more. The album has an ebb and flow sequencing to it, starting off powerfully with "Mirrorful" and "Livid." Then the vibe mellows out for the slow groove of "Iodine" before bursting into the manic intensity of "His Only Trade." "Trade" is one of my favorite Jawbox songs ever, thanks to the frenetic drum part and overlapping vocals -- the song is so fast J. Robbins can't sing all the words by himself. The off-time "Chinese Fork Tie" pounds out its own special place in my heart too, as do the crazy club-stompers "Won't Come Off" and "Empire of One." The record also boasts a great hidden track, a cover of Tori Amos' "Cornflake Girl," further confirming Amos' place in rock music.

Robbins was always a little more interested in musical professionalism, and that's why his production has always been a little bit cleaner. While I tend to favor lo-fi, a Robbins production has always sat well with me -- the guy knows what he's doing. Same goes for his songwriting. So while some may criticize Jawbox for being the cleanest sounding Jawbox album, in my mind that's not really much of a weakness. Robbins never overproduces his records, and he certainly doesn't do so here with co-producer John Angello. The record may not have a Steve Albini-like rawness, but listeners do get all of the instruments presented with a powerful clarity.

Listening to Jawbox 12 years after its release, it's bizarre to think that the band was dropped from Atlantic Records for a "perceived lack of singles." The longest song is still under 4:30 in length. In my mind, the label really should have pushed to get Jawbox on the radio and them MTVs, because they were sitting on an album loaded with catchy, muscular rock gems.