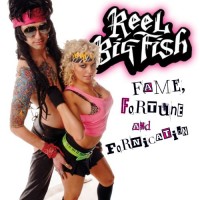 First things first: This is an album of covers. They don't make this evident when you look at the album (or at the show when they shamelessly tout it), but it's 10 covers from the likes of Poison, Van Morrison and Tom Petty.

This proves to be both a blessing and a curse. On the one hand, Reel Big Fish manage to avoid the dearth of creativity that we heard in much of Monkeys for Nothin' and Chimps for Free, but it also means that we don't get much of the great material of their early albums.

The album starts out with Poison's "Nothin' But a Good Time." This is easily the best track on the album, with tight horns and a fast beat. Unfortunately, the following tracks fail to break any new ground and really just give the entire album a rushed feel, as though Reel Big Fish were just trying to get it recorded and out the door as quickly as they could.

If you have liked Aaron Barrett's vocals in past RBF albums, chances are you'll like them in this one, because they sound virtually unchanged. Ditto that for the horns: The two trumpets and trombone remain tight but for much of the album provide nothing more than punch chords with occasionally more interesting licks. The rhythm section, too, remains true to its roots, though hardcore fans may notice Matt Wong's replacement with Derek Gibbs (who is certainly a competent player, but still feels very different).

Another high point of the album is Toots & the Maytals' "Monkey Man," though it's important to remember that they actually wrote the cover years ago for "The Wild Thornberrys Movie" and merely re-released it for this album.

The album's final track, Poison's "Talk Dirty to Me," makes use of female vocals (those of British Tatiana DeMaria, of TAT); it's a welcome change, but the song is the album's weakest; the lack of drums and style of guitar (unfortunately) deviate from the group's traditional sound.

So while this album provides a slew of not-too-bad covers, it fails to do anything new with the songs, and merely feels like a rushed compilation of average songs.