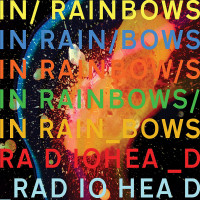 In Rainbows by Radiohead is an album that made me think about how current music is digested nowadays. As not one to let hype get to me in way of opinions in any way, shape or form, I bought this album when it first came out in CD form, a time when their masterpiece, OK Computer, was yet again in heavy rotation in my player. Yet, the press praised this new album as if it was the next coming of music, and many placed it at the top of the year's 'best of' lists.

So, I began thinking that one has to wonder, that with all the online music review websites and downloading systems, that when a new album is released it usually does not have as much jubilation behind it, and sometimes even honesty. The sense of happiness ceases due to the way that many of the songs are leaked to the internet even before their release. The honesty is dying due to both this and how the music press now lays their opinion on thick before one has time to establish their own.

I believe one of the best things about music is when an album seems like it's your discovery, not someone else's. While many need a starting point to know at least what is good, the new way of musical digestion both tells you and lets you hear "the good stuff" before you can even have the album (with artwork!) in your hand and hear it how it is supposed to be heard: front to back and with booming stereo speakers.

So, a year ago, I listened to In Rainbows just a little bit, but never in full. I did not want my honesty to become nerve-wracking in having to decide if I was sincerely liking or hating it, if I was going with the flow or even trying to be different by not liking it.

Yet, now more than a year later the hype was sure to have left this album, and now all I had to do was listen. And listen I did to give you my honest opinion.

In Rainbows is an album that is not only Radiohead at their most mainstream, but also at their most ordinary. It is an album that has much of Thom Yorke's beautiful, signature vocal work as a focal point, yet not much of what makes his paranoid cry for clairvoyance seem as different from many of Radiohead's influences and knockoffs.

In this album, Radiohead subjects us to their more introverted and quieter side. In fact, much of the album plays out like Yorke's solo album, The Eraser, did. In Rainbows seems as if it is making a case for them as a more radio-friendly, alternative-sounding band, as if almost polite, in fact. Gone is much of the edgy experimentation that accompanies Yorke's they-are-out-to-get-me paranoid ramblings. The music here tries to be much too subtle and arty, thus bordering on indulgent dissonance, and sadly has a feeling of serenity breaking through the horizon. However, the album as a whole is not bad per se, because Yorke's voice sounds like a gentle breeze settling over an ocean wave. Though it can racket up in volume to an operatic rock-and-roll tortured scream, it also seems unfulfilled.

Songs like "Weird Fishes / Arpeggi," do nothing to make it seem as if they want to again break barriers, while "All I Need" and "Faust Arp" rerun over ground that Yorke has demonstrated on prior, much more epic, experimental, harder rocking and simply better songs. He has shown that he is both a singer of superb passion, encapsulating emotional torment in a thoughtful way, and that there was not much farther to go in crystallizing his voice with both production and accompanying instrumentals by that standpoint.

In this album, his lyrics are poetically sensitive, high and clement, so much so that after a while it sadly rings like a cry for remorse, cut short by a tightened throat holding back tears. Songs like "Reckoner" and "House of Cards" are good as they are augmented by string arrangements, but nothing brilliant as the sound is actually too remote, quiet and stifled, undone because Radiohead seems like so many others, as if their sense of subversion has finally gone to the masses. It's as if the album is an annoying Jenga tower that crumbles when the player makes the slightest wrong move.

In Rainbows is at its best with "15 Step," "Bodysnatchers" and the second-to-last-song, "Jigsaw Falling Into Place." These songs may have been done before by Radiohead, but no one does it like them. These tracks are the saving grace of the album, and the only reason the album didn't receive only 3 stars. Yet, they also sadly still remind one of what once was.

Honestly, though, more than half of the songs here work in some way (six of the ten, to be exact); there is a certain point in which the listener gets its stifled sentiment, as In Rainbows is another note of alienation and non-subdued anguish, and is done not up to the band's often high standards, seeming like one of the lesser bands it influenced (Muse or Coldplay).

While some love the album, others would rather Yorke and the music to be so scared of itself with both its institutionalized behavior and subversive ethic that both the band members and listeners will be in hospital straps by album's end -- as that is the Radiohead that we all know and love.

Let Me Run: Meet Me at the Bottom