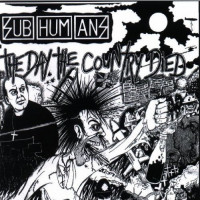 With the exception of Crass (who often teetered on the edge of art-punk or equally experimental conduits), the UK's Subhumans are arguably the most influential anarcho-punk band in history, and certainly one of the most prolific. With eight studio records to their name, an addition to the Live in a Dive franchise and a handful of EPs, Southern Records has taken it upon themselves to re-master and reissue six of the band's classic albums originally released on the band's own Bluurg Records.

From their DIY ethics to their radical left rhetoric, the Subhumans helped continue to carve out the definition of anarcho-punk even while the genre's pioneers, Crass, were moving swiftly towards their end. At a time when bands like the Exploited and Chaos UK shouted their lyrics like political slogans, the Subhumans often seemed more reflective, or at the very least, like they were part of something much bigger.

Their first LP, The Day the Country Died became somewhat of an instant classic, selling 100,000 copies on the wings of such standouts as "Mickey Mouse Is Dead," "Zyklon B-Movie" (later paid tribute by NOFX on "Zyclone B Bathhouse"), and "'Til the Pigs Come Round." From the initial 20 seconds of white noise that opens "All Gone Dead" to the battering beats of "Black and White," The Day the County Died not only showed promise, but helped secure the Subhumans place among the most prominent punk bands coming out of the UK in the early `80s.

The Subhumans followed up their debut with somewhat of a game-changer in the form of 1983's From the Cradle to the Grave. While the 44-second instrumental intro is unsuspecting enough, the nearly 17-minute long title track shattered popular conceptions regarding the simplicity and insolence of the burgeoning punk rock movement. The cautionary narrative biography shifts tempos, chords, rhythms and melodies more than many albums of the time, and paved the way for its better-known, 15-year successor, NOFX's "The Decline." Sandwiched between the aforementioned tracks are some less impressive numbers like "Where's the Freedom?" and the cowbell-laden "Waste of Breath," though overall the album is still solid and topped off by the overwhelming magnitude of the title track.

Time Flies / Rats combines the eight songs from the Time Flies…But Aeroplanes Crash 7-inch and the four-song Rats 7-inch onto one disc with all the original artwork and classic Subhumans tracks like the anti-nuclear reggae-punk of "When the Bomb Drops" and slightly psychedelic "People Are Scared." Some songs here like "I Don't Wanna Die" and "Everyday Life" seem slightly less inspired than the majority of their catalog, but for the first half being released the same year as From the Cradle to the Grave, it's still a respectable collection of tunes.

In 1985, many of punk's first wave on both sides of the pond such as the Clash and Black Flag were nearing their end, but Worlds Apart was still the third-to-last full-length for the band in the decade. Aside from packing the fan favorite sing-along "Apathy," it also contains such greats as "Ex-Teenage Rebel" and the reggae dub "Fade Away." The bass stands out particularly well on songs like "British Disease" and "Straightline Thinking," but interestingly takes a backseat on the brutally a-melodic "Someone Is Lying" where it might have been helpful.

EP-LP collects the band's material that predates their debut LP, and coincidentally reflects a much more primal musical palette, though still containing such classics as "Religious Wars," "Drugs of Youth" and "Reason for Existence," which was covered by Leftöver Crack for the band's split with Subhumans' ska-punk counterpart Citizen Fish. These songs may be among the band's least creative musically, but the zealous delivery with which they're spat reinforces the authenticity of lead singer Dick Lucas' testimony.

The final re-release of Southern's effort is 1987's 29:29 Split Vision, which oddly enough contains what would have been title tracks for two previous albums, Worlds Apart and Time Flies. Standouts include the frenetic bass-popping "Walls of Silence" and cock-rock guitar soloing of "Heroes," while the aforementioned seven-minute ska jam "World Apart" is a good listen even while bordering on excessive tinkering.

As important as these releases are to stay in current circulation, Southern Records has done everyone an enormous favor by re-mastering these classics while preserving everything great about them. Outfitted in digipak form with original artwork, lyrics booklets and heavy-duty foldout posters, this collection of reissues will please both the perfectionist and the utilitarian while ensuring some of the most important punk rock music of all time remains available for years to come.