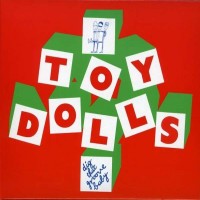 Happy English Punk blended with Oi at it's best. The Toy Dolls full-length debut is nothing short of a classic. Sadly the line-up (Olga, Flip & Happy Bob) did not last long enough for a second album.

The guitars are lightly distorted, the backup vocals are in the same style as the late 70's oi bands, and the lyrics are almost childish and makes no sense at all. The vocals are happy and Olga (Michael Algar) sound like a chick. What else do you need?

The Toy Dolls formed in '79 as a four piece, but in the first of many line-up changes Olga took over the role as the lead singer. The band has released 16 full-length albums over 15 years and they are still alive and kicking.

This is a nice record to have in your collection, but a hard one to find, so I suggest you go and buy one of the five collections out there, and make up your mind from there.

Snuff: Long Ball To No One