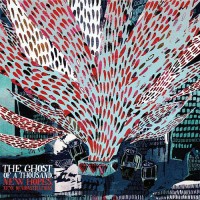 The Ghost of a Thousand hail from Brighton, England and have carved themselves out as one of the most exciting bands around, both on record and live. Their 2007 debut album, This Is Where the Fight Begins was, in places, phenomenal, with hard-crunching riffs creating a highly energetic, aggressive sound with an underlying volatility that occasionally exploded quite brilliantly on tracks such as "As They Breed, They Swarm."

This sophomore effort is in many ways more of the same, yet at the same time, comes from a very different place. As the band alluded to before its release, this is not in the same vein of being a catchy, sing-along hardcore record, and their description of the sound as 'heavier and sadder' is entirely accurate.

Fucking new romantics, it's only rock 'n' roll.
This is our religion,
As heaven we'll never know"

The above lyrics are taken from the chorus of "Head, Toes, Teeth" and handily encapsulates the band's passion and aggression as well as their caustic lyrical approach. Despite being one of the album's strongest tunes, it is undeniably one of the more straight-up hardcore tracks on the album and would sit happily on their debut. Unfortunately, the tracks that move furthest away from their previous sound, whilst technically sound and worthy of praise for their experimental approach, often fall seriously short of the band's high standards.

For example, "Small Mercies" is a short instrumental track which adds nothing to the album, whilst "Neptune" has an intriguing and experimental outro which misses its intended mark by being upsettingly rubbish. The song "Split the Atom" is perhaps the standout offender here, coming across as a very confused sound, with Tom Lacey dropping his usual ferocious growl altogether. The overall effect is a track that is bland and lifeless, compared to some of the album's standout moments.

Those standout moments, however, are what save this release from being a disappointment. Opening track "Moved as Mountains, Dreamt of by the Sea" is a delightful thrash-fest of a track, with a truly stunning crescendo finish which showcases this band at its absolute best. Elsewhere, "Running on Empty" almost bursts at the seams with energy, aggression and a desire to fist-pump whilst "Bright Lights" and previously mentioned "Knees, Toes, Teeth" are both very strong offerings.

All in all, this is a decent effort from the Ghost of A Thousand. In my opinion, its shortcomings see it fall below the overall standard of their debut, but contains in places some very promising material of a much greater potency and maturity. What is most exciting, however, is this band is young, with plenty of gas in their tank and having recently signed to Epitaph, they certainly have the potential to turn the hardcore scene on its head with a future release. After all, "it's only rock 'n' roll."

A Wilhelm Scream / Living with Lions: live in Brooklyn