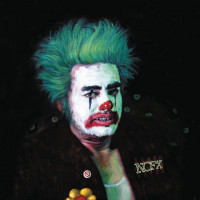 Let it not be said that NOFX was never a giving band. Just a scant seven months after releasing the solid full-length Coaster, the band is back with four new songs, plus an acoustic rendition of Coaster's emotional highlight, "My Orphan Year." Furthermore, the band is dishing out the songs on two different formats: one CD entitled Cokie the Clown, or two separately sold, variously colored, differently sequenced seven-inches named Cokie the Clown and My Orphan Year. Got it? This is America, dammit, the land of 43 kinds of peanut butter because you deserve it. Crunchiness and smoothness must be regulated at all times or morale will drop and the terrorists will smirk!

The Cokie the Clown seven-inch and CD both open with the title track, a lovely ditty about a fairly awful clown. It's in the traditional NOFX punk rock vein with a circus music intro. Based on the lyrics -- "You all have been dosed / The kettle corn's been laced / The fudge has been lined" -- Natalia Fabia's terrifying/awesome cover captures the character's spirit perfectly.

After that ditty, the vinyl and CD switch up track listings, so here's a rundown on the CD version. "Straight Outta Massachusetts" is a super catchy 77-second song about moving from one U.S. coast to the other. "Fermented and Flailing" takes aim at the American populace that allowed their country, from its government to its corporations to its own citizens, to perform a few dozen atrocities. "Codependence Day" should be familiar to anyone who purchased the Warped Tour 2009 Tour Compilation.

An acoustic version of "My Orphan Year" closes out the CD, and it still hits hard. Fat Mike talks about losing both of his parents in 2006. It was a painful story about cancer, loving mothers and bad fathers on Coaster, and that goes double for the acoustic version. There's no rocking to hide the loss of his mother, and his disdain for his father now sounds like it's coming from a place of resignation rather than anger. Given that he wrote "My Vagina," it's sometimes too easy to forget that Fat Mike can write an emotionally hard-hitting tune too.

At 11 minutes, the CD goes by quickly. At this point, listeners should know what to expect from a NOFX release, and while Cokie the Clown won't blow minds, it should please the faithful.

Boys Like Girls: Love Drunk
Go to the review index