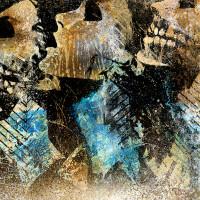 Writing a Converge review can be a daunting task. With a band like this, a type that is a "reviewer's favorite," everyone is clamoring to get their review up first and to show how much more deeply and passionately they understand and appreciate this band. This is because, at first, Converge is usually such a difficult egg to crack. What first sounds like noise and abrasiveness for abrasiveness's sake later reveals itself as incredibly intelligent and sophisticated music, full of hooks and moments of genius. Fans of the band have usually had that eureka moment when listening, where all of the disparate and tension-filled pieces come together. Take the opener "Dark Horse." It has all the Converge hallmarks: light speed, muscular drums, an unconventionally complex guitar riff (with huge tone), Jake Bannon's pterodactyl vocals, all before a ridiculously heavy breakdown that expertly segues to a seven-second-long drum fill into the opening riff again. At first pass, there's just so much going on, but as your brain begins to put it all together, the calculated carnage shows the clear vision that this band expresses.

Another part of this reviewing conundrum is that almost all heavy bands do one of two things well and build their whole careers on that one skill. One, there is skillful technical playing. Some obvious examples are Dillinger Escape Plan or Between the Buried and Me. It's intelligent and challenging, but that is really 90-100% of the appeal of those bands. Then, there are bands that are so emotional and honest, that just by playing one chord can make you choke up and feel an entire lifetime of emotions. These "passion bands" are usually not so technically adept and get by on simple approaches that pay off because they are able to just hit so hard on an emotional level. Most punk bands are like this and Reinventing Axl Rose is a perfect example. It's raw and messy -- full of mistakes -- but it has more impact than do most albums on a technical scale. The rare thing here, though, are bands that do both. Converge is one of those bands, and in hardcore, no one does technical sophistication better, and almost no one does pure heart-on-your sleeve emotion better. They're in tune both to the primal nerve of human experience and the intellectual need for complex and well-thought design.

So, as a reviewer, I can focus on the biggest difference between this record and their previous few, which is really just a whole heck of a lot more metal and shred-guitar stylings. Kurt Ballou has always been a revered guitar dude, but the guitars just do not stop moving on this record. Drummer Ben Koller even gets in on the metal action at around 1:30 of "Reap What You Sow," where the band straight up sounds like vintage Slayer complete with a guitar solo before heading back into Converge land. As impressive all this playing is, this is not the complete picture of why Converge is so revered -- the emotional impact they can have on the listener. The title track is a perfect example of why their music works so well. The band keeps a breakneck speed up for more than a minute before laying out one of the most brutal breakdowns that is neither flashy or gimmicky -- just heavy and primal, showing their skill with tension and release, and hitting that perfect center between intellectual sophistication and basic emotional response.

Then there is the fact that Converge are one of the few long-time stalwarts in a genre defined by short-lived bands. Perfect hardcore bands put out a demo, a 7", and a full-length, and then should break up while touring to support that full-length. Converge, on the other hand, has been around for almost 20 years, has put out seven proper full-lengths (among 7"s, splits, and a collections record) and didn't even really hit their potential until their fourth album, Jane Doe. Part of their longevity is that they do whatever they want. People wanted Jane Doe II, but You Fail Me went in a darker and more streamlined direction. Following suit in not following suit, this record ends with two tracks that are more like indie rock than metal or hardcore, but still work. "Cruel Bloom" and "Wretched World," which features guests from Neurosis and Ghengis Tron, respectively, are atmospheric brooding songs that just add another color to the band's pallet.

Lastly, there are the people who don't "get" Converge. I say "get" because I have seen a sentiment on this site that says that people only like Converge because it's cool to like them and everyone is just pretending, like, say, in the story of the Emperor's New Clothes. The truth is, if you think Converge is terrible or unlistenable, you just don't get it, but that's totally fine with me and I'm sure it's fine with the band as well. If you are into Converge, this is another great record from a band that has been defining consistency for the past 10 years. If you haven't checked out this band and are interested, this record is just as good a place to start as any.