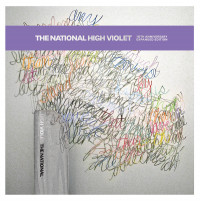 Forget fingers--Matt Berninger has the world on the tip of his tongue.

Few singers have as distinct or as stirring a voice as the National's frontman, and on the band's fifth studio album, High Violet, he's as morose and transfixing as ever. Berninger's voice gives the National a real air of desolation, of hopelessness and solitude. It may not be warm, happy, summer day music but it's as engaging as ever.

And it has to do a lot with subject matter. Berninger's tales of longing and despair are tales that everyone, at one point or another in life, can relate to. It's a certain kind of comfort in knowing there's music for those cold, bleak days and a person who is out there feeling them too.

The aptly titled "Sorrow" begins with the pitter-patter of drummer Byran Devendorf's snare and some quick strumming from guitarist Bryce Dessner before Berninger's deep baritone delivers the lamentations of youth ("Sorrow found me when I was young, sorrow waited, sorrow won") and the effects of depression well into adulthood ("Sorrow's my body on the waves, sorrow's a girl inside my cave / I live in a city sorrow built, it's in my honey, it's in my milk") all while maintaining those emotions in minimal instrumentation. It's not that other aspects of the band are by any means put on the back burner, just that they're the perfect accent to Berninger instead of the primary focus.

That's not to discount any of Berninger's bandmates, though, for as important as the vocals are they'd have far less impact without the perfect moods set in each of Violet's 11 tracks. An ominous bassline and warm background string work bring "Afraid of Everyone" in, and Berninger details the throes of depression and isolation. After wailing "I don't have the drugs to sort it out," the percussion establishes a taut rhythm and Berninger voices his demons:


It's the intricacies of the instrumentation that really start to sink in after repeated listens. On "Afraid of Everyone," what seems at first to be a fairly standard rhythm is mired in complexity. The deep tones of guitarist Dessner's guitar and the weaving in and out of guitarist Aaron Dessner's soulful-but-reserved progressions create a second layer of sound. On "Lemonworld," it's Devendorf's drumming that comes to the forefront. One of the more fast-paced songs on the album sees Berninger croon atop Devendorf's pronounced rhythms, and as Berninger saunters over the mid-tempo track, the drumming becomes louder and the rhythms more varied.

It's a perfect example of the National's innate ability to marry deep, captivating vocals and sweeping, complex rhythms. It's not the pace nor the duration of the National's songs that matter, but the feeling and mood contained within.