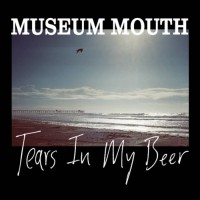 Museum Mouth self-released their full-length debut Tears in My Beer, but hopefully they'll pick up a label soon. Beer boasts 10 tracks of fuzzy lo-fi punk rock--the meeting point between Vivian Girls' aesthetics and early Lemuria's energy. Just shy of the 20-minute mark, these songs are fat-free and catchy (that goes double for the 38-second "Jennifer"). Sure, it's the second release I've reviewed this year with this kinda kiffy title, but it's still pretty great. Somebody get stoked on this ASAP, please.

Just about everything clicks perfectly into place for the record. The muddy recording might have been a deliberate artistic choice or a matter of thriftiness; either way it benefits the punky style. Synths emerge from the haze when needed, like when they add a second hook to the excellent closing track "The End of Days." Shit be swirling, but Savannah Levin's vocals are still intelligible for those of us who want to learn the songs. Graham High's guitars create a wall of noise Johnny Ramone-style, especially on that blurred intro to "Jerk Girls." I don't want to leave third member Karl Kuehn out, since he handles drums, keyboards and backing vox, but dude probably already knows he's important to the band.

Admittedly, the band's style of punk rock might have gotten old if the record actually lasted longer than an episode of The Simpsons, but that's purely hypothetical, and therefore not much of a criticism. The rock-hard, unrelenting reality is that Beer is the kind of punk record that should entertain Brooklynites with questionable haircuts and everyone else in equal measures. Sometimes the group utilizes Lemuria's boy/girl vocal tics; sometimes they recall Low Budgets' scrappy keys-n'-guitars; but most of the time, they just sound good. "Noise band" is a blog buzz phrase right now, but Museum Mouth is doing it better than most.