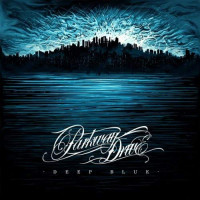 People like to use the musical atrocities committed by Celine Dion in order to justify doing or saying mean things about Canada/Canadians. If Parkway Drive sticks around a little longer, I fear they may find themselves to be the Celine Dions of Australia. You know in American Psycho when Christian Bale commands that one girl to eat the ass of the other girl? Funny stuff, right? Well, when Parkway Drive's Winston McCall would sing, he always reminded me a little bit of that scene; as a clown-clad pre-corpse Heath Ledger might ask: "Why so serious?"

Deep Blue shows a band exploring things that on paper seem pretty good: metal/hardcore and sharks. Take a record like Black Flag's My War, for instance--it was and still is a visceral communication of the experience of human alienation through metal and hardcore punk. Given the same subject matter and musical reference points, Parkway Drive end up simply sounding like a bunch of young men in dire need of hugs; someone call Mike Watt, because I hear he gives great ones.

Now onto the sharks: The furor over Shark Week is simply remarkable, and why wouldn't it be? Sharks are violent and have lots of teeth. That sounds like a good inspiration for hardcore, and if you've ever seen Parkway Drive's video for "Boneyard," you know they agree. In this context, Deep Blue can only be seen as a reference to the movie Deep Blue Sea, a movie that somehow succeeded in making sharks uncool--much in the same way this album has failed at music.

The concept of Deep Blue Sea is that there are these super intelligent sharks, but the lyrics on Deep Blue are likely to further the theory that there are highly intelligent turds out there. For example, check out he album opener "Samsara": "Freedom is slavery. War is peace. Ignorance is strength. Existence is suffering." That shit isn't even good in some contrarian sense, but shows a complete lack of understanding of the concept of the concept of Samsara found in many eastern religions and philosophies. Much like the writers of Deep Blue Sea should have never given sharks complex thought, someone shouldn't have ever given the person who wrote those lyrics access to a pen or keyboard, or hell, even a stick to make shapes in the sand. Maybe if the music behind these very dumb lyrics was somehow engaging I could get behind it, but the 20 seconds or so the actual song lasts seems to drone on for hours.

The only real consolation I can give Deep Blue is that no one attempts to sing on it. But frankly, that's it, aside from some competent drumming--that is, when he isn't busy doing stupid genre workouts of double bass attacks. The rest of the band will put you to sleep. I mean, when the guitarists ever attempt to break out of their stale riffs and tired breakdowns, things automatically must veer off into cheese metal territory, like on "Wreckage." However, "Wreckage" and songs like it lack the one thing that is somewhat redeeming in cheese metal and that is obvious musical talent; there is nothing here that seems unique that you'd specifically come to this record to hear.

I don't say this very often, but there isn't anything redeeming about this album in the lyrics, the playing of the instruments, the vocals, or the production. Parkway Drive have dialed this one in, folks, which would be excusable if someone had them arrested for crimes against the listening and they could only record via prison phone. Deep Blue was done of their own free will and own planning, however,; somewhere along the way the guys in this band said, "Hey, this would be a good idea." No, it wasn't a good idea. It was a bad one...a very bad one. Metal and hardcore deserve better than this; sharks deserve better than this; and most importantly, your ears deserve better than this.

Love Is All: Two Thousand and Ten Injuries