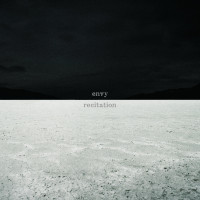 After one-upping formidable acts Thursday and Jesu on splits, Envy has finally returned to the full-length game with Recitation. Where those splits found the Japanese post-hardcore group composing epic, emotional outbursts that rose and fell within 20 minutes or so, Recitation is a far more epic endeavor. Over the course of 65 minutes, Envy goes through a series of ups and downs. While the song meanings might not always be clear--the lyrics are in Japanese, after all--there is still plenty of passion packed in that transcends language barriers.

Running just over an hour, though, the album might test some folks' patience. Recitation goes through two intros, first on "Guidance," the spoken-word opening track featuring Kaoru Okunuki, and then again for the gentle first five minutes of "Last Hours of Conformity." This is a record of contrasts, kind of like a more extreme Mogwai, and so the record takes its time setting itself up. Here in the good ol' U.S. of A., we like our albums to open with explosions and big choruses. But Envy makes the listener work for it, cultivating atmosphere in order to make their hardcore passages that much more intense. Enjoy the gentle moments, because shit gets real once vocalist Tetsuya Fukagawa starts screaming.

Suddenly the twin guitars of Nobukata Kawai and Masahiro Tobita stop shimmering and start shredding. Drummer Dairoku Seki finally gets something to do: Thunderous toms and cymbals crash in over shoegaze guitars. It's huge and then it suddenly stops. Then the band resets for "Rain Clouds Running in a Holy Night," slowly building up into a punk outburst.

By the end of "Rain Clouds," Recitation has gone through an entire album's worth of dynamics in just 20 minutes. The record then decides to kick ass for a bit before settling into a dreamy, Jesu-style ambience. The second half of the record starts to simplify a little, in that individual songs settle for one specific tempo rather than jumping around. But then, Recitation feels interconnected from start to finish. While in the act of listening, distinguishing between tracks seems irrelevant.

Okunuki returns for the closing track, "Your Hand," by which time Recitation should have won over listeners. The album takes a while to assert itself, but that's part of its charm. It's a dark masterpiece. An expansive work that's beautifully violent and vice versa, it could easily appeal to fans of M83 and Deftones alike. However you define it, Recitation finds Envy yet again beating out Western acts.