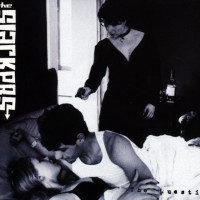 After writing and posting a five-star review for a Let's Go Bowling album, people who knew who the band actually were told me I overrated it, and then had an argument about what the best ska album of the '90s was, which I guess is normal post-review behaviour on the Org. This disc got mentioned a lot, it's one of my favourites (ever) and no one has reviewed it, so here I go.

The Slackers have been recognised as one of the greatest ska bands of all time, being smart, sophisticated, musically tight, catchy, danceable, melancholy, joyous, open-minded and ambitious about how they play their smooth rocksteady sound. I haven't heard 1997's Redlight (which is also contested as their best) properly, but I've only known the band for about two years, which I hope is a good excuse, so I'm only able to say this is the best one I've heard.

Nonetheless, what an album! For something that opens with a Bill Bailey-style cockney piano intro, the record is simply beautiful. Calm, sweet numbers: "Yes It's True," "No More Crying" and "The Question." Bluesy, rock-influenced songs: "Do You Know", "Face in My Crowd," "The Mummy" and "And I Wonder," which sounds a little Steely Dan-influenced to me (and with the band's wide and varied taste, it could well be).

There's cheerful traditional ska, like "Manuel," the slightly cynical Sitar-powered Calypso ska (best description I could think up) of "Mountainside" and the toasting instrumental "Motor City." And one of my favourite songs of all time: the pretty, slow burning "Alone Again."

The album is coherent and fits together perfectly. There are no bad songs (though we can ask just what is the exact point of "The Question (Version)"), only better ones. The only flaw is the lack of a lyrics sheet. Why? This is hardly even a setback, though, so never mind.

This is a lovely album. It's not epic; it's not bombastic; it's just lovely.