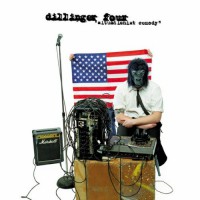 After bouncing around at Hopeless for a while and releasing a slew of seven inches, Dillinger 4 has come to rest in the Fat stable. And what a great signing they have turned out to be. Like the recent Larry Arms release, this D4 album really changes the complexion of the Fat roster.

The album kicks off with what I can only guess is a Japanese radio broadcast of the coming robot-human war. From there the midwestern punk rock lifts you up on its back and carries you for 34 minutes of pop-punk glory. Now, don't think pop-punk like Blink or Homegrown. This is more challenging. It's catchy and hook filled, but sometimes you have to clean away some of the grime to find it. When you do, you'll be singing along and this album will be permanently entrenched in your CD player or glued to your turntable.

Like every D4 album, the song titles themselves are almost worth the price of a CD itself. Take "A Floater Left With Pleasure In The Executive Washroom" or "The Father, The Son, And The Homosexual/Single Parent". Apparently they have some kind of tie to the lyrics of the song, but I have no idea what the connection might be.

This release is neither groundbreaking nor a display of technical wizardry. It is a group of well written and well executed punk songs that doesn't really sound like anything else out there. But if you did need some comparison in order to go out there and buy it, try the aforementioned Lawrence Arms. D4 puts a little more energy, fun and variety into their shit, though. Not much else to say, except I have a new favourite release this year and it's Situationist Comedy.