Mike Molnar has provided us with his second interview; this time with Marc from A-F Records' Thought Riot. The band has released two records via the label, 2002's Shattered Mirror Syndrome, and Sketches of Undying Will last year. 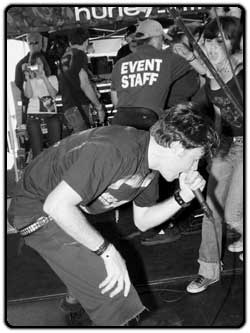 Please start by introducing yourselves and tell us what you do in Thought Riot.

I’m Marc and I sing. The other members are Kelley & Robby (guitars), Mike (bass), and Paul (drums).

When and where was Thought Riot formed?

It was formed by three underground kids from Modesto, CA who wanted to sing about how fucked up the world was. Back then it was just my two friends and I and we wanted to play music and sing about politics. That was back in ‘97.

What were your musical influences when you started the band?

When I started the band I was listening to a lot of Anti-Flag and Fury 66. I was only 18 and just wrote the same kind of music I listened too.

Why are you the only founding member still with the band?

Just happened that way I guess. It was always primarily my songs and lyrics so I always kept the same band name, no matter who was in it. And it never got to the point where I was the only one in the band. The band just evolved as time went by.

What was the original goal (or reason) for the formation of Thought Riot?

To play music and sing about the things we wanted to sing about (which was injustice in society for the most part). First and foremost was the desire to write and perform music.

When did Kelley join the band? Have you guys ever got any negative responses to having a woman in the band?

Kel joined at the end of 1999, December I think. I’ve never been aware of there ever being a negative deal over Kelley’s presence; I mean I don’t even notice it anymore and haven’t for quite some time.

When do you feel that Thought Riot got its first big break?

When A-F Records first contacted us back in early 2001.

How did the band get involved with A-F Records?

We sent them a demo and they liked it. It was really that simple. They were all strangers to us, I mean they were Anti-Flag; this is just before they released Underground Network, but they were still huge. We had had no previous contact with them.

What is it like to be on the same record label as Anti-Flag? Do you get a lot of support from them?

We aren’t on the same label as Anti-Flag. Anti-Flag is on Fat Wreck Chords, we’re on A-F Records. The guys own and run our label, and have put out some Anti-Flag releases on it, but they are on a different label. But as a label they’ve supported us to the best of their ability and that is more than you can ever ask.

What do you feel you accomplished when you released Shattered Mirror Syndrome in 2001?

One of my life’s goals. It was a great personal experience and achievement. We didn’t break any new punk rock grounds or anything, we just put out a record, but that was big for me at the time.

What message where you trying to portray through the record? Do you feel you were successful in this respect?

Each song had it’s own personality, and the record really didn’t and still doesn’t seem to have an overall message to it. If anything, the theme would be reflection, both inward and outward. But regardless of it’s lack of wholeness it has seemed to reach a lot of people and that’s inspiring.

It is obvious that Thought Riot is a band with a strong political message. Have you ever gotten any negative responses towards your views?

Of course, any one with strong views / opinions receives slack for it, especially when those views are socio-political in nature. Of course people are not going to like what we have to say, if they didn’t we wouldn’t need to be voicing them. 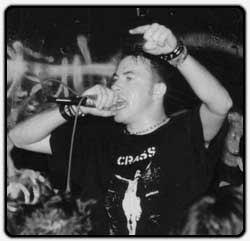 In 2002 you guys were an opener on the Mobilize For Peace Tour. How was it to share the stage with two of the most amazing punk rock bands, Anti-Flag and Good Riddance?

Experience of a lifetime.

Do you feel that being on a big tour like that got you a lot of exposure, and maybe some new fans?

Most definitely. I only wish we could redo that tour now that we’ve had a couple member changes and are in general a more experienced band, but that’s only a fleeting thought. That tour wouldn’t have been as memorable if it wasn’t our first tour and we weren’t so inexperienced.

In 2003 when you started writing Sketches of Undying Will did you have any specific goals that you wanted the record to accomplish?

We wanted it to be better than the “Shattered Mirror Syndrome”. Better songs, lyrics, production, and feel more complete as a whole album. The same goes for the next album we write. You can force any other kind of expectations on it or you’re going to force something. When that happens disaster strikes. Fans can hear something forced.

How do you feel that the second record compares to the first?

Well the first album has songs written from 1997 until 2000 on it, songs that were written here and there and redone over and over again. So there’s not as much cohesion between the songs as opposed to “Sketches” where all the songs were written with the same members and within the span of 9 months. That’s one reason it feels more complete to me. We also had a bigger recording budget the second around, which meant we got to spend more time on it. Finally we had a new drummer and guitar player for “Sketches” and we all worked really well together.

What kind of response did you receive with the release of Sketches of Undying Will?

For the most part the responses have been outstanding. It’s been a rare instance when somebody has said they like out first album better. Everyone that hears “Sketches” just seems to really enjoy the record, and all the reviews have reflected that. It was also sweet to be ranked number 1 on Interpunk for a day, heh.

What was it like to be on tour with Anti-Flag, Rise Against, Against Me!, and None More Black?

Let’s see um, well, we were on tour with four of the best underground bands out there. hmmm. Yeah, it sucked.

What is it like to perform at Warped Tour?

It’s bittersweet. You have a long all night drive the night before, so you’re sleeping very uncomfortably in the van, then you wake up at 7 am to unload and run around trying to figure out what goes where, then you sit in the sun until you play. You play and have fun, but then sit in the sun for the rest of the day. Then it takes about an hour to break down and get out of dodge to start the long night drive to the next day location. Showers are hard to get to. When it’s over and done though, the experience is not one to be missed.

Why have there been so many band member changes since the formation of the band?

What are your plans for the future (tours, recordings, etc.) ?

We tour the East Coast in August and September for 5 weeks. We’re going to have a song and video on Rock Against Bush Vol. 2, which is released Aug. 10th. After the tour we hope to do support on other tours all the way through until next summer. We’ll be writing the entire time and then hope to record at the end of next summer and have a record out by late Fall of 2005.

What would you describe Thought Riot's current sound or style as?

If you had to choose one song that you say is the best indication of Thought Riot's sound and message what would it be?

“With Love, the Underground” from “Sketches of Undying Will”

What kind of music do you guys listen to? 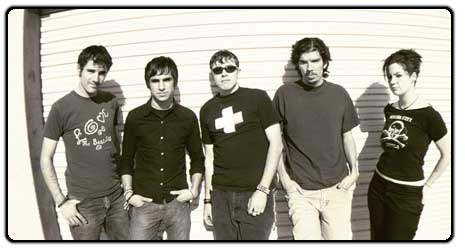 We all listen to different music. Each of our record collections looks very different from each other. Mine has the most punk and hardcore. I just love that music. But I’ve also got a lot of early 90’s grudge and some other stuff of course.

Anything in the works for a Canadian tour in the future?

We want to get there, but nothing definite yet. We don’t want to half-ass anything, so we’re waiting until we get something really solid together.

Do you have anything else to say to our readers?

Thanks for reading this far. If you’re already familiar with our music, thank you for your support. If you’re not then you can find out more about us at thoughtriot.com and listen to us at purevolume.com/thoughtriot. Thanks again.

Rock The Vote president responds to GOP cease and desist