The band: the Methadones. The subject matter: an upcoming tour with the Soviettes, the band's Naked Raygun connection, and sausage tacos. 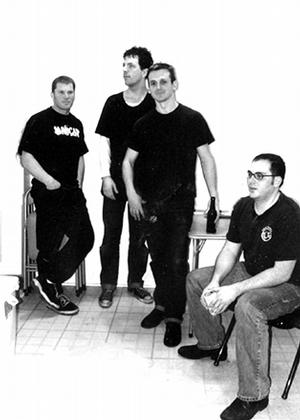 Did playing with the Blue Meanies make you guys feel inadequate in any way? Dan: No. I'm too old for stuff like that.

Why don't you guys tour more? Canada and the western side of the U.S. specifically asks when you'll make your next appearance. Mike: Money. It takes money to tour and we have none. And it takes touring to make money. We're in a Catch 22.

Dan: We'll be touring the west coast with the Soviettes in April. We'll be hitting Canada whenever Mike and Pete take care of their problems with Canadian customs.

What do you think about constantly being played in the background on pretty much every MTV show? Mike: It's decent promotion. As long as the shows let people know what songs are being played. I haven't seen any of them.

Dan: I don't think about it too much. It makes an interesting conversation piece at Thanksgiving dinner with aunts and uncles but that's about it.

Dan: The Weakerthans' Left And Leaving.

Did any Chicago bands inspire you as kids while growing up? Mike: Cheap Trick and REO Speedwagon.

Dan: Naked Raygun. They are still one of my all-time favorites.

What's TV shows do you all enjoy watching? Mike: "Arrested Development" and any Food Network Show.

Is it true one of the band members kicked Victory Records owner Tony Brummel's ass? Dan: No. But one night we got really drunk with Tony and he started acting very macho. Things got a little weird between Tony and Pete for a second. It was drunken bullshit, really. We all laughed about it later.

What are the worst day jobs you guys ever had? And what do you do currently if anything? Mike: I work at Wholefoods in the beer, wine and cheese department.

Dan, what kind of amps and guitar are you using? Which model? Dan: Marshal JCM900 amp. Marshal cabinet and a Fernandez guitar. For now.

Is it true Mr. Vapid is getting the MOPES boys back together to do a 7" on It's Alive Records? Dan: No. But that's not the first time i've heard that rumor. I'll be focusing on the Methadones for now on. 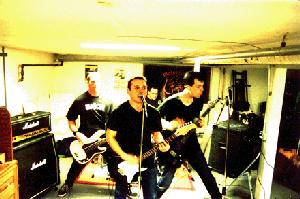 One person asks "What's the Methadones' connection to Jeff Pezzatti and Naked Raygun? I saw it posted that a couple of the guys are in a band with Jeff and they're recording with J. Robbins sometime soon. What's the deal?" Mike: Pete and I play in the Bomb. Jeff P is the singer. We're recording a new album this month with J. Robbins producing. It should be done and out within 4 to 6 months from now. You can find out more at www.bomb1.com.

Now for the important stuff:

Dan: I would say Jesus. History has shown that he could take quite a beating. I think after a while Optimus Prime would just give up and Jesus would be the winner.

If someone killed one of your members, would you seek the death penalty or life imprisonment? Mike: Life. Unless it was Mike Byrne that was done in. Then I'd let the guy out on parole in 2 to 5 years…

Dan: I would dress like George Washington, creepy hair-do and all. Then, I would take revenge on every red state in America. 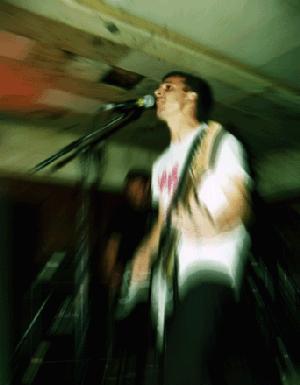 What do you think of the Golden Age fanatic that is Alex Ross and his interference with letting the DC Universe actually, you know, expand? We know he was a motivator behind the Green Lantern: Rebirth project, and while the story is admittedly "hella" deck, can you just let the powers at DC throw our childhoods away (provided you too grew up with Kyle Raynor)? What next? Barry Allen returns from the Speed Force to take the mantle as The Flash? Batman's parents come back to life? Uncle Ben is really Hawkman's father? Seriously. Mike: See above..

Tastes great or less filling? Dan: Have you seen my beer gut lately?

Not Economically Viable is out now via Thick.

Mock Orange posts video for "I've Been Saying So Long"