Via an Anonymous Source, Posted by Aubin Paul Rykodisc 18 years ago

The second American release by Japanese horrorpunk outfit Balzac will be released by the Massachusetts-based Rykodisc label on June 28th.

The record, titled Out of the Grave and Into the Dark will compile two of the band's relatively recent releases - Came Out of the Grave and Dark-ism - onto one 80-minute CD. As with their last US release, 2003's Beyond the Darkness, the package will include a bonus DVD, featuring three music videos, five live performances, a short horror movie entitled "Marchen aus dem Horrorwald," and five audio tracks. 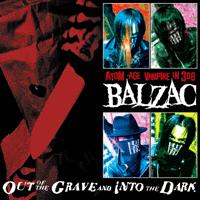 Horse the Band posts 'demos', headed out on June tour