New music from the Delegates; artwork and track listing posted

Via an Anonymous Source, Posted by Aubin Paul Bankshot! 16 years ago

BANKSHOT! Records has released the artwork and track listing for The Diary Of Hamilton Fish, the upcoming sophomore album from Montreal, Canada's The Delegates. The record is the follow up to their self-released debut, 2003's We All Taste The Same, and was produced by Mike Trujillo (Osker, Leftover Crack, Choking Victim) at Succulent Sounds in Highland Park, CA.

The label has posted a track from the album, titled "Pink Shoes In A Petri Dish" on the Bankshot! Myspace page. The band recently wrapped two weeks of dates on the Vans Warped Tour, and will be heading out with labelmates The Glow this September.

The record is due out October 4th. 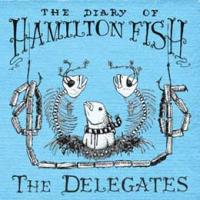