GenX had a chance to speak with Laramie, Wyoming's own pop-punk superstars, Teenage Bottlerocket, writing that:

Who knew there was a punk scene in Wyoming? Well there is one, and Teenage Bottlerocket are not only the best punk band from the Cowboy State since the Lillingtons, they're also one of the big reasons a punk scene exists out there. They book local clubs, promote and work at shows, and help out their fellow punk bands in the underground hotbed that is Laramie, Wyoming.

People refer to Teenage Bottlerocket as "Pop Punk", "Ramones-core", "Weasel-core", or "Leather Jacket Punk"; but whatever it is, they certainly owe nothing to the trends. It kinda makes you grateful for a place like Wyoming. I had a chance to talk with Ray and Kody about their home state, their new record Total, and their big tour with the Groovie Ghoulies this past Summer. 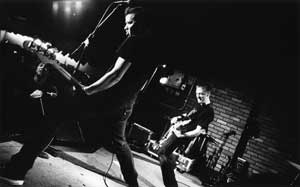 So you guys seem to be the last decent band around playing Ramones-y pop punk. Itâs sorta like the new Star Wars, where all the Jedis went into exile or got killed off, and Teenage Bottlerocket is the only band left that knows how to use the force. Okay, bad analogyâ¦ but is it a good thing or a bad thing that your scene has died out? Â

KODY: Â  Both. There was a time when the pop punk scene was completely flooded with all these shitty bands. I think because of that it was really hard for people to take the genre seriously. There were some good bands out there but it was too hard to find them when you had to sift through all the garbage. Now that it's died down, it's a lot easier to recognize good bands, they stick out now. It's just too bad that there aren't more of them.

If Teenage Bottlerocket were a comic book superhero/villain, who would it be and why?

KODY: I don't read comics, so I don't know. Â  Maybe the Punisher, he sounds cool, what does he do?

RAY: I would say that weâre like Super Man. Â  Clark Kent is such a dork when heâs not being Super Man. Off the stage we are just regular joes that get little to no attention. Â  Laramie is such a hippie town, no one gives a fuck about your music,unless of course you sound like Widespread Pantleg. Itâs when we plug in our instruments and pick up our drum sticks that our red cape flies in the wind and the hippie scum bag villains get burned by the rocket.

Laramie is a town known best for a pretty heinous hate crime: the murder of Matthew Shepherd. Â  Has that ever affected you guys personally?

RAY: I knew Mathew Shephard because he had a crush on my roommate Alex. Matt would come into Taco Johnsâthatâs where Alex and I workedâto try and hook up with my roommate. We didnât give out numbers at Taco Johns, we took down names and shouted them out when the orders were up, and youâd have to ask a bunch of rednecks what their names were. Mathew was always polite and tell me his name was Matt, unlike the redneck retards that would give you a name like Esmerelda. That was about the extent of our relationship. I went to High School with the dipshits that murdered him. I heard that they had killed someone and that the victim was gay, and I didnât know what to think of it at first. Then I saw Mattâs picture in the paper. I cried my eyes out. I also knew that we were forever going to be labeled as homophobic close-minded hicks from Laramie.

Itâs when we plug in our instruments and pick up our drum sticks that our red cape flies in the wind and the hippie scum bag villains get burned by the rocket.

Do you have any idea who the first punk band from Laramie was?

RAY: This old drunk at the Buckhorn Bar in Laramie named Davidâhe wears an empty gun holster and a black trench coat, by the wayâalways tells me about these dudes in 1980 called the Dirty Dogs. Â  Supposedly one of the Dogs ended up playing guitar in the Black Hearts. David tells me they had a 7 inch featuring a song entitled "Sorority Girl". I canât find a copy of it anywhere.

Was there an early band that was responsible for inspiring others in Wyoming or did you look to other places for influential bands?

KODY: Other places. Â  I didn't know of any other bands from Wyoming when I started playing tunes.

RAY: Green Day and Screeching Weasel are the big reasons why my brother Brandon and I started playing music. The University of Wyoming publishes a magazine called "Frontier" and they had an issue I was in 9th grade that featured three bands on One Legged Pup Records. The magazine came with a floppy 7 inch that had each of the bands on it. Jeff and Steph ran the label at that point, and I remember when Brandon and I were invited over to Jeff and Stephâs house. I had a feeling inside me like we had made it big or something. None of the bands on OLP were punk but we gave them the utmost respect. A band called Some Kind of Cream opened up for Screeching Weasel and the Queers in Ft. Collins. I think Phile 13 opened up for Green Day in Ft. Collins in 1993. Brandon and I had million questions for the OLP dudes concerning Green Day and Screeching Weasel, but none of those bands really liked punk rock. Some Kind of Cream were like, "The kids hated us at that SW show!"

So your new record, Total, has been out for a little while and lots of folks are talking about it online, message boards, etc. It was the top seller on Interpunk for a month and the response has been really positive it seems. The strangest thing Iâve observed is that people are under the impression that you guys are rich rockstars now that youâve sold a couple thousand CDs. Sounds weirdâ¦what do you guys think about that stuff?

KODY: I love being rich!

RAY: I get pissed off at the dipshits on those message boards. They act like their opinion is worth a shit, but Iâve heard THEIR shitty bands, that always cheers me up. WeÂ´re not rich rock stars. We all have rent to pay and the band isnât paying it. Kody works at a grocery store, Joel works as a waiter at a vegetarian restaurant, Brandon is in school, and I am gonna be working on an oil well off the coast of Brazil this Summer. The money we do make with the band usually gets put in the gas tank, pays for t-shirts, whatever.

I went to High School with the dipshits that murdered him. I heard that they had killed someone and that the victim was gay, and I didnât know what to think of it at first. Then I saw Mattâs picture in the paper. I cried my eyes out. I also knew that we were forever going to be labeled as homophobic close-minded hicks from Laramie.

What was it like recording at the Blasting Room and getting to work with Bill Stevenson?

RAY: The Blasting Room kicks ass, itâs an hour from Laramie and we got great sounds from that studio. When we were recording there they ran out of water, and we had to drive up the street to mini mart to take a shit. They have beds that they let you crash on, which is nice, but the first night we stayed there Bill forgot to turn the heat on and we froze. Everyone got a cold. There are no windows eitherâ¦Iâm not trying to make the Blasting Room out to be Hellâs half acre!(Laughs)The reason we recorded there is because the sound is great and everyone is so nice to us, not because Bill was in Black Flag or whatever.

What are your 5 favorite pop punk records?

KODY: Well, excluding the Ramones, because that's a givenâ¦Iâm gonna go with Screeching Weasel Anthem For A New Tomorrow, Screeching Weasel My Brain Hurts, The Queers Love Songs For The Retarded, The Riverdales Storm The Streets, and Green Day Dookie. That is a tough questionâ¦

Youâve toured parts of the country before, but this Summer you went on your first proper U. S. tour with the Groovie Ghoulies. Things seem to be moving along really fast for you guys, are you pretty excited that a little band from Wyoming is off to such a promising start and on such a cool tour?

KODY: Yeah, we're really excited. There's never a dull moment when we all get together.

RAY: Being from Wyoming, we donât get to go to punk shows every night. We drive down to Denver when we want to see a band that we love, like say, Pegboy. We feel very privileged to go on this tour and we take none of it for granted. Â  Itâs so awesome to go to different cities around the world and rock out with your best friends. I wouldnât trade it for anything.

So Kody used to be in the Lillingtons, another fine Wyoming punk band that made quite a name for themselves. Has that affected Teenage Bottlerocket at all? Iâm sure itâs turned a lot of people on to the new band, but people might have different expectationsâ¦

RAY: Kody has had a real positive affect on the band, he has a great sense of humor and keeps the morale high. He also writes great songs. 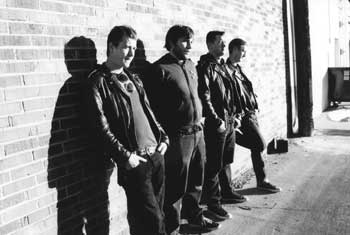 KODY: I think people who follow pop punk and know the Lillingtons are going to know Teenage Bottlerocket and like it.

Any other bands from Wyoming we should look out for? Other than Chris LeDoux, of courseâ¦

RAY: With the exception of Looker, Rad Bradleys, and Sack, all the bands in Wyoming suck! They can all go fuck themselves. (Laughs)Ya know, I never got a chance to see Chris LeDoux. Heâs the real deal by the way, chewed Copenhagen, rode bulls and shit. May he rest in peace. Â

Tours: The Scarred touring the midwest in anticipation of 2006 full length