Contributed by IndieTickets, Posted by Aubin Paul 16 years ago

The final lineup has been confirmed for the two day Riot Fest 2005. As previously reported, the festival will be headlined by Dead Kennedys on Nov 4 and The Misfits on Nov 5, with appearances by Agent Orange, The Dickies, Angry Samoans, Lawrence Arms, Suicide Machines, The Germs, The Bouncing Souls, U.S. Bombs, The Effigies and many more.

The promoter is also giving away free tickets each day for the show on the myspace page, details on the trivia contest can be found on that page. 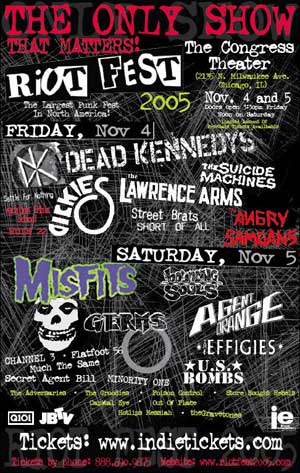