With the release of Shoot the Moon: The Essential Face to Face, earlier this week, it seemed appropriate to run an interview I did with the band in 1996 for my 'zine, Anti-Manifesto.

The long-running band broke up in 2003 shortly after the Vagrant release of How to Ruin Everything.

The album collects material from the band's 12 year career for a total of 19 essential tracks as well as 2 that were previously unreleased. The disc includes deluxe slipcase packaging as well as extensive liner notes and rare photos.

This interview took place in the Summer of 1996. The band was headlining the Warped Tour, which included Civ, Fishbone, NOFX, Rocket From the Crypt, Deftones, Guttermouth and Unwritten Law. Face to Face was supporting their sophomore release, Big Choice and was still riding high on the success of their single "Disconnected" from their debut, Don't Turn Away.

Later that year, the band would release their A&M Records debut, the fan-dividing and starkly different Face to Face.

The band, who had been constantly surrounded by people requesting autographs all day, was gracious enough to invite me onto their tour bus and both vocalist/guitarist Trever Keith and (then) new bassist Scott "Topper" Schifflet took the time to speak with me. A friend of mine also comes in at one point in the interview.

What exactly caused the rift with Fat, you guys had one record with them, and then changed labels? Trever: We donât have a rift with Fat records, as a matter of fact, we get along great with everyone at Fat. Weâre still friends with Mike and Erin. Our deal with Fat was just for the one record, and then when we were up for the next record, we put it out on the table to see what labels were interested, and we took the deal we thought was the best. Fat made an offer, we just felt that we got a better offer from another label. So thatâs where we went. We donât have any bad feelings towards Fat or anything at all. We still get royalty checks twice a year

What happened to Matt Riddle? Trever: Matt left the band and Scott (Topper) joined the band. Matt is now playing with 22 Jacks and No Use for a Name. He also worked on the Pulley record

Topper: Heâs the busiest guy in the world, only I played bass on the last 22 Jacks record.

Could you give me a quick version of your bio? Whoâs in the band, how long youâve been around, what records you have out?

Itâs me, I play guitar and sing, Chad plays guitar, Rob Kurth plays drums, and Topper plays bass. Everyone sings backups. We formed in 91. We put out a record on Dr.Strange in 1992, and Fat records picked it up at the end of the year and since then weâve put out one other full length album called Big Choice and itâs on Victory [Music].

We have brand new album coming out September 10th, called Face to Face and itâs on A&M. I donât know what it will be in Canada

So, whatâs your new album like, have you kept the same style?

I donât think we ventured too far away from the Face to Face style. As far as the Big Choice record, which I think is a good record, but I got a lot of comments from people who were into Donât Turn Away who said they liked Big Choice, but that Donât Turn Away was better and I tend to agree.

We went a little further back into the Donât Turn Away-style, though weâve also done stuff weâve never done before, like the song today, "I Won't Lie Down" but weâre playing it because itâs different, fun and new for us.

We do go off on a couple of tangents, but itâs still what youâd expect from usâ¦ but better! Itâs recorded better, and we self-produced it, and I think weâre really good mixers. 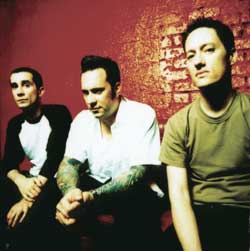 How long did it take to record?

Well, this one is longer then any other record weâve done. From beginning to end, it was about three months. Not day after day, but we spent about two and a half weeks tracking it.

Do you ever feel strange in the punk scene? Like to just be labelled "skater music" or punk all the time?

Well, yeah, but thereâs not place Iâd rather be. If I had to be labelled. But I would like to see us branch out. Iâm sure every band would like to be seen as a band, and not just as part of a scene. Weâre definitly striving for that. Not to alienate anyone whose ever given us props in the past, because we donât want to alienate anyone whoâs ever bought the record or come to the show, because itâs put us where we are today. We just don't like to be pigeonholed.

Do you guys skate?

Well, we used to. Jeffâs the youngest guy in the band, and he still skates and he lives at the beach and surfs. Scott used to skate constantly. But do we now? Not really.

Whatâs it like signing autographs? Trever: You want the truth? Well, itâs incredibly embarrassing. But by going out and performing for the public, youâre offering yourself on the chopping block and itâs just part of the deal. I would feel much worse denying someone who was into the band and autograph then to just walk by and go "fuck you! I donât do that" If I wanted somebodyâs autograph and they told me no, Iâd feel really gypped.

Topper: I know it seems a little fucking silly and all, but when I was a little kid, I met Eddie Van Halen in an airport and laugh all you want, and I asked him for his autograph, and he was totally fucking cool to me. He signed my shirt and he talked to me. And as far as Iâm concerned, he could be a fucking dick, but he was so cool to me, it stoked my out to this day. I still have that shirt in a box somewhere. And you know, sure itâs silly. But it made me happy, and if it makes somebody else happy, sure autograph it.

Topper: To be so fucking mean to someoneâ¦. I mean, I wonât grab a pen and run out to go sign, but it starts slow. Some little kid will ask for one and it snowballs. And then it gets silly, because youâre not even looking at them anymore.

Trever: You donât really like it, but you wonât say no.

Topper: I donât care until Iâve been signing for five minutes straight. Let me put it this way. Nine months ago I worked in a mailroom, shipping and recieving. Delivering to company bigwigs. And whatâs my signature worth? Nothing. But I had to sign office envelopes all the time. Itâs part of that job, and by god itâs part of this job.

What do you think of bands getting onto the internet? Trever: Well, itâs good, but I think weâre getting a little ahead of ourselves. Weâre going to end up with a lot of mole people. Weâve created something that could be useless. Like television.

Topper: The neat thing about culture is that they all are different and have different idenities. Now, with everyone zip-zapping across the internet, itâs just going to water down the social pool. Theyâll be no reason to go to anywhere [different].

Trever: It's like going to Japan where they have McDonalds on every corner too. But are we against having a page? No. Itâs cool. 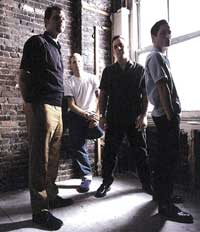 Thanks for doing this interview, I notice that some bands like NOFX aren't doing them for some reason. Trever: They just donât do interviews.

Topper: Well, there is a point when you can take it too far. The pendulum swings both ways. This is fine. This is rock stars. Anti-rock stars, are just the same. Youâre still alienating people. And if youâve got some sort of hard core agenda, youâre still ignoring people. Itâs a lot easier to answer a simple question then just to say âno commentâ

Trever: I think the perception doesnât exactly work. They think that theyâre doing the opposite; being anti-rock stars, but you interpret it the same.

Paul (Aubin's friend): Well, sure I can see them being annoyed having to talk to a thousand people. But to not do interviews with zines, which supported them from the beginning, and to instead do an interview with Hit Parader, which I saw on the newstand back home. They can talk to them, but they canât talk to a small zine. It's hypocritical.

Trever: Let me go on the record and say, I fucking hate metal magazines and I hope they never print anything about us again. All they are, are teeny-bopper magazines read by thirteen year-old girls.

Topper: Nothing against thirteen year-old girls, mind you, I want that to go on the record as well.