I Am the Avalanche

Mark Rowan sat down with the boys from I Am The Avalanche recently. The band talked about being an "ex-band", their plans for the future and their current label.

The band released their Self-Titled debut in 2005.

Thereâs probably still like 70,000 people around the United States that donât know who we are and know who the Movielife are. And they need to kind of pay attention a little more. We are making a lot new fans, for sure. The tunes are different, the vibes are different, and the live experience is real different. Iâm singing so thereâs always going to be those comparisons, but if you yell it at me Iâm going to make you look really stupid.

What would you say is the major difference between I Am the Avalanche and your old band, The Movielife? Vinnie: My music is more groovy and sexy and well thought out. The lyrics are better. Iâm a lot better now than I was; I know what Iâm doing now. I play with dudes that all lock into everything what we all want to do musically. Itâs just the excitement of a new band and a new kind of outlook on how to do things and how to make music and how to tour. Everything has changed.

Actually you guys were all in bands before this one, how were your former bands different from this one? Ratt: I was in a death metal band.
Kellen: I was just in a crappy hardcore band.
Brandon: Why was it crappy?
Kellen: Itâs was just a lot different than the music we are playing now and I have a lot more fun doing this.
Mike: I was in a lot of hardcore bands as well, a lot of DIY shit. Touring and playing basements. Itâs not much different than this as far as doing it ourselves, as we do a lot of stuff ourselves too.
Ratt: Weâre also all best friends and get along completely together. This is the band we were all meant to be in.

Have people stopped yelling Movielife songs are you or do you still get that? Vinnie: Mostly stopped yelling. Thereâs probably still like 70,000 people around the United States that donât know who we are and know who the Movielife are. And they need to kind of pay attention a little more. We are making a lot new fans, for sure. The tunes are different, the vibes are different, and the live experience is real different. Iâm singing so thereâs always going to be those comparisons, but if you yell it at me Iâm going to make you look really stupid. [laughs] 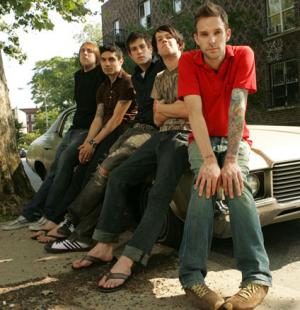 How much do websites like myspace and purevolume help a band get their music out to people? Vinnie: More power to it. I think itâs cool, makes things easier. Seriously, if something changed for the show that day you can pretty much go on myspace, cause you know everyone checks it every five minutes, "Hey the show that weâre playing bring us cookies and beer," and people will have time to get cookies and beer.
Brandon: Itâs cool too because with those sites itâs free, you donât even have to put downloadable songs on there if you donât want to, you can just stream songs. Myspace is just cool because we get all these friend requests, these kids want to be friends with usâ¦everyday I check it and there are just 10 pages of friend requests. Itâs just cool to know that kids seek this out.
Ratt: The best part about myspace is that itâs easier to keep in touch with your fans, they can always send you messages, and always see whatâs going on with you.
Mike: We write everyone back to, so if you want to talk to us weâll write you back same day probably.

This is the last show for this tour, how was it like playing with Piebald and Hot Rod Circuit? Vinnie: An honor. We love those guys, weâre all fans.
Brandon: Weâre all big fans for a long time. Both those bands have been together for so long.
Vinnie: Theyâve been very welcoming to us, theyâve been really fucking cool. Everyone makes sure everyone is having a good time. Everyone makes sure everyone is comfortable and taken care of.

Howâs it like being part of the Drive Thru family once again or for the first time for some of you guys? Brandon: Itâs good, we played the CMJ showcase.
Vinnie: Thatâs where we met a lot of the bands. I havenât even met the new generation of Drive Thru as far as the new signings go. We did CMJ and we hung out with Steel Train and those guys are absolutely amazing. We met this band House of Fools, thatâs also like a hippie style rock band, weâre really awesome sounding. Rx Bandits are some of our closest buddies as far as bands go. We toured with Hidden in Plain View and Halifax over in Europe, so we all became really tight after that.

How is touring over there different from touring over here? Vinnie: Itâs different the kids are awesome over there, they are really passionate. They really appreciate you coming over.
Brandon: A lot of times when youâre a new band and youâve never been to a state and the people there donât know who you are. They just stand there, "ok I donât know any of these songs, ok theyâre way too emo." Kids over there are just exited to hear new music, they are just so pumped up. They go nuts, itâs awesome.
Vinnie: Europe is just a different vibe, you show up and they got cucumber sandwiches there and shit like that. Itâs good times.

Why do you think a lot more dance-electronic-type rock is becoming more popular now than it was 5 years ago? Kellen: Because they play it on MTV constantly.
Mike: The whole New York underground is just whatâs big right now. Itâs whatâs going to be big until something new comes along.
Ratt: Hopefully nu-metal makes a comeback.
Mike: Weâre hoping for a butt-rock nu-metal cross over punk type shit.
[laughs]
Brandon: Thatâs what Iâm hoping for.

Weâre not a band thatâs looking to sell a million records, we know thatâs kind of a lottery especially with an indie band. So weâre just like "Oh, we made a recordâ¦letâs tour on it." And then the next goal will be to make another record.

Where would you like to take I Am the Avalanche? Vinnie: Weâre not a band thatâs looking to sell a million records, we know thatâs kind of a lottery especially with an indie band. So weâre just like "Oh, we made a recordâ¦letâs tour on it." And then the next goal will be to make another record.
Ratt: And tour with it. We just want to play. I love playing everyday, I like hanging out with my guys.

What were your guyâs top albums of 2005? Ratt: Nada Surf - âThe Weight Is a Giftâ
Brandon: This band Hatesphere put out an album this year thatâs pretty good. You can put my name next to that like really far away from everyone elseâs.
[laughs]
Mike: I have to say the Bayside record is my favorite, I listen to it everyday.
Vinnie: The Decemberists - âPicaresqueâ
Kellen: Ryan Adams - âJacksonville City Nightsâ
Vinnie: There are a lot of good ones.

Anything you want to say to people out there to get them interested in your music? Vinnie: Go on myspace and listen to tunes, weâre going to put new ones up there soon. Iâm sure you can find the record, if you canât burn it from one of your friends. Thatâs what I would do. Just get it somehow. Just come out to a show. Thatâs where it all happens.

Nitro signs Much The Same

The Snake the Cross The Crown resurface