We did a quick interview with Thursday, who recently released their sophomore record and their first on Victory. Click below for the interview.

1. Congratulations on your signing to Victory, which should ensure a much larger distribution for your records. How did that come about, and how has your relationship with Victory been?

Well, I suppose we had been creating a buzz with our first release on Eyeball Records, "Waiting". Victory flew out to see us at a show in our hometown, with boysetsfire. It was a great show, and a lot of our fans were there so the show was fun. Shortly thereafter Victory expressed definite interest in wanting to work with us. So far our relationship has been great. We were worried about losing the familial atmosphere that we had grown accustomed to working with Eyeball. But we have a good relationship with the staff at Victory. We have little disagreements here and there about packaging and things like that but nothing insurmountable.

2. Full Collapse was one of my favourite records in a long time. How does the song writing process in Thursday work?

It has slowly gotten more collaborative. When we wrote Waiting, it was pretty much that one person would write a song and then dictate all the parts to the rest of the band. These days, we have been collaborating much more. Someone will bring an idea to the table and we immediately try to figure out how to extend that idea or alter it. It is no longer a dictatorship. This process is much more enjoyable, even though sometimes we have our little disagreements.

3. Lyrically, Thursday tackles a lot of emotional subjects. Where does the inspiration for the lyrics come from?

I know Geoff writes from life. Every song is directly related to a specific event or chain of events in his life. Music and writing is his vehicle for his ideas.

4. What music have you guys been listening to lately?

A lot of different stuff. Sigur Ros, Miles Davis, Hope Conspiracy, Fairweather, Cursive, some Bjork, this band called Prevent Falls who are going to be huge. We try to listen to different types of music all the time just to keep everything varied…sometimes music goes into lulls where nothing new is coming out and everything starts getting boring… and then all of a sudden all these bands pop up out of nowhere and start writing all this great stuff.

5. How do you guys feel about the internet?

Hmmm….in moderation it is an interesting thing to understand…like how it works, how it can be used for postive causes or for a type of communication. I think too much dependence on the internet for important things like keeping track of money, or for getting news is a bad idea. All news online is so diluded anyway. It can be a positive thing for music. It allows bands who never would have the money to travel abroad the ability to reach people who are far away.

6. Can I get a little background on the history of the band?

Well, the band was started by Tucker and I (Tom) in 1998….after playing together for a few months I met Geoff Rickley at an Ink and Dagger show. Shortly thereafter I met Tim Payne in a drawing class we had together…I asked him to join and he was interested. Steve is our latest addition. He joined at the end of the summer in 2000, right before we signed to Victory….then we went into the studio and recorded Full Collapse.

7. Are you guys planning any major tours? Do you have tourmates, or dates yet?

Yeah, we've got some pretty fun stuff lined up….in June we tour the east coast with Fairweather and Skycamefalling…..starting in July, we head out with Boysetsfire, Samiam, and the Movie Life…..then again in August we go out with Drowningman and Waterdown….during that tour we are playing 3 dates on the Warped Tour. So things are going to be pretty fun for the next 3 months. Hopefully we will end up over in Europe by the end of the Year.

The scene here is great. Everyone is very supportive. So many bands pop up here and there and because of this there are always people willing to put on shows and bands to play them. It is a great communal atmosphere. Bands like Lifetime, Midtown, and The Bouncing Souls are from here.

Thanks for answering these, and congratulations on your amazing record.

Wow, thanks so much for being supportive, it has been a pleasure! 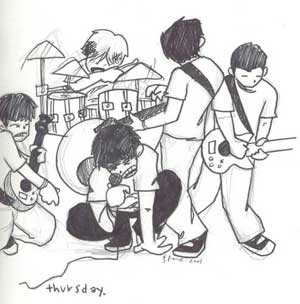