Mark Rowan had the chance to talk to the drummer of the Bled, Mike Pedicone, about how far along they are on the next album already, their recent tour in Japan, and tells me a pretty amusing story about a ridiculous car accident that happen on tour.

The band is currently on tour with Protest the Hero, As Cities Burn and Since by Man and released Found in the Flood last year.

I think the different experiences that we had up to now are going to create a different sound for this new record. Weâre not necessarily setting out at this point to do something just totally wacky, but itâs not going to be the same record again.

Mike Pedicone: Basically how itâs usually done is that Jeremy [Talley, guitarist] writes up riffs and he and I will get together and kind of create a skeleton of a song. Thatâs pretty much whatâs happened so far. We have three songs in the works; itâs basically just guitar and drums going in. Usually me and him will get together and do that shit, and then the other guitars will come in. We just jam on it for a while until it shapes up into something else. We wanted to start earlier on this one so we have more time to do the other things to the songs that we wanted to do. On the last record we didnât really have enough time to do.

Do you think the sound of the next album will evolve even further?

Yeah, I think we always want to be changing and having different parts of music that weâre influenced by within our music. A lot of the reason why this last record was different was just because of stuff we had gone through in the past couple years before that. So I think the different experiences that we had up to now are going to create a different sound for this new record. Weâre not necessarily setting out at this point to do something just totally wacky, but itâs not going to be the same record again.

You were in Japan not too long ago, how was the tour over there?

It was fucking amazing, man. It was our first time over there ever, we played two shows. It was just really cool. The reaction was just awesome; a lot of kids came out. Itâs so crazy that itâs just completely the opposite of what youâre used to and then still have kids out there, especially ones that hardly speak your language, singing the words to your song. Itâs really an amazing feeling. We weâre just all super grateful to do that, just to see the place, let alone play shows there.

Are you guys big Revenge of the Nerds fans?

[laughs] Yeah. We sure as hell are.

I was trying to figure out "Hotel Coral Essex"â¦

Do any of your other song titles that come from movies?

Not necessarily from movie titles, but we have on our first record the song "Ruth Buzzi Better Watch Her Back". Thatâs from a quote from Wet Hot American Summer, if you watch it youâll see what Iâm talking about. 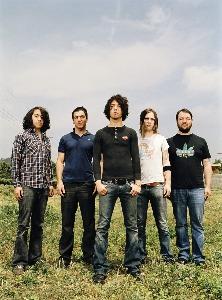 Why do you think people who arenât typically fans of say, hardcore music, are into the Bled?

I think it has a lot to do with, like I said before, we all come from different musical backgrounds. We all have different influences. We didnât necessarily set out to be a hardcore band. I said this before in interviews, but itâs like coming from Tucson knowing that itâs such a hard town to get recognized for any kind of art. It kind of builds up a little bit of…I wouldnât say "anger" [laughs], thatâs kind of silly or whatever. But, it definitely takes its toll on you especially if youâre a musician and itâs what you want to do, knowing you have all the odds against you. So the songs came out of us heavy just because of those feelings we were experiencing. I think that has a lot to do with it. As far as why fans like us, I think that has to do with our influences from other stuff. Like when I play drums I donât think about heavy music, Iâm thinking about jazz or even thereâs some pop punk that Iâm into. Iâm not going to lie and say Iâm not into. Everyone has different kind of influences rooted from jazz to rock and we try to bring that out as much as possible in our songs.

Speaking of that, what are some bands or artists youâre into that your fans might not expect?

Personally, I listen to a lot of soul and I like a lot hip-hop. Anything from fucking Anthony Hamilton to Notorious BIGâ¦Black Star. As far as jazz goes Ornette Colemanâ¦Miles, of courseâ¦you know thereâs a lot of different stuff. Thereâs a new dude I want to mention, P.O.S., heâs part of Rhymesayers. This guy is amazing. He kind of brings like a heavy feel into his hip hop. And itâs really fucking amazing and thatâs kind of inspirational in a way. There are a lot of different influences.

So apparently the Veronicas are pretty big fans of you guys, did you know that?

What do you think of their music?

[laughs] I think their greatâ¦to be honest with you I havenât heard a whole lot of their stuff. Itâs definitely catchy.

What would be your ultimate dream tour for you?

As this point for me would beâ¦The Mars Volta, AFI, andâ¦Converge maybe. Iâll go ahead and throw a little bit of P.O.S. on there, my boy. Cause that would be fucking amazing.

Whatâs one of the craziest things to ever happen to you on tour?

Probably the car accident we got into while I was behind the wheel driving through the fucking snowiest roads ofâ¦everâ¦of evermore. [laughs] We were driving and going like 80 or whatever at night on a snowy road. I think the van just started to slide and the next thing we know weâre fish tailing up the freeway at 80 miles an hour and the trailer swung out and started spinning. [laughs] I screamed throughout the van, everyone was screaming in the van, screaming in my ears, screaming all over the place. I was like, "Look guys this is it!" [laughs] Screaming "this is it", everybody tripped. But, you know whatâs amazing about it we started spinning, we probably did like two 360s, spun off the center median, and I donât know how we didnât flip, but we didnât flip. And the trailer slid up against some snow which stopped it and van slid to a stop. And that was fucking crazy. God it was wild. We were actually watching Tommy Boy at the time on a little DVD player in the front, so thatâs kind of funny.