Mark Rowan had the chance to talk to the The Appleseed Cast shortly after the release of their full length titled Peregrine. The album is the first for The Militia Group and the follow up to Two Conversations, released in 2003.

The band will soon begin a tour Polyvinyl act Aloha.

Mark Rowan: What were some different influences going into this recording? Chris Crisci: God, Iâm trying to think. Itâs really hard to pin point influences. I donât think we went into it with any conscious influences. Iâm sure there were tons of subconscious things affecting us. I think what we were going for, is that we wanted to make an album with a lot of moments on it, a lot of definition. What am I trying to say here? Aaron? [laughs]

Aaron Pillar: I was thinking I watched Austin City Limits with Wilco on it and I watched that Nels Cline guy play guitar and I was like, "Holy shit, I want to do some stuff like that." [laughs] In the same whole moment category, I remember talking to Sean way before we did it and all I could think of was that I want like that "Smells like Teen Spirit" Nirvana. Itâs big, itâs huge, itâs like "whoa what the heck." But, I also donât want the whole record to sound like that. When it happens I was really hoping we could accomplish that. No doubt that was on all of our minds. 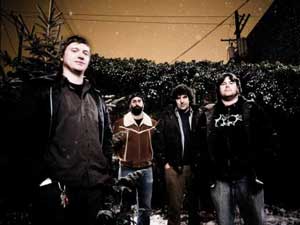 Mark: How have the reviews and feedback been for the album so far? Aaron: Pretty good so far. I havenât read anything yet that hasnât been pretty positive. We got one that was a little screwy, but whatever, Iâll let that one go. Itâs selling really well. Whatâs cool is that we cut out a lot of the older material to concentrate on this record and weâve gotten a lot of kids being like, "Well I wish you would have played old stuff, but I really like the new stuff too." So, itâs kind of cool that we can transfer over to it and we havenât gotten a bad crowd response for it or anything.
Chris: Nothingâs worse than when you go to a show and the band you love starts playing all new songs and you donât like any of them. [laughs]

Mark: Yeah, that is never fun. You guys were Spin Magazineâs band of the day last week, has that helped you guys get maybe a different audience wind of the new album? Aaron: I hope so; itâs hard to say so far. I know there were people on our MySpace page that have seen it and have listened to the record because of it, so that is always a good thing. I guess this next tour we will tell a little bit more if that helps.

Mark: I heard you guys were very happy with this album, even in the earlier stages, which album are you guys the most proud of? Chris: I would say this one. [laughs]
Aaron: Iâm going to go with this one.
Chris: No question.
Aaron: I definitely think this one for me. The sound quality is what I always hoped we were capable of and we did it. So that makes me really happy.
Chris: That was a really hard question when the last album came out because I had a lot of second thoughts about it. But, this album, I think we all are floored on it.

Mark: Did you ever think for a minute, "Manâ¦Fuck this" and think about putting the band to rest after the record label and lineup problems? [deep sighs followed by laughter]

Aaron: Hell Iâd be a liar if I said I didnât think like that sometimes. After that 2004, sort of having that little year off to think about it a lot, but I did spend a majority of that time sitting in my apartment thinking about it. Itâs a tradeoff, itâs worth it. Right now weâre pretty solid, I hope. Through it all I think weâre on pretty solid ground now.
Chris: We better I just bought a brand new van, so we better.

Because regardless of whether it works, itâs still really fun and it kind of fills up my life.

Mark: [laughs] When did you guys know for sure you were definitely sticking with this band? Chris: For me personally, there was never really a time that I thought we were really going to disband. But, thatâs just me.
Aaron: Iâm the same way. The problems I was running into, not with the band, but personally. I thought ok theyâre going to get better and I can get back to my life. And it kept getting worse and I was getting farther away from what my life was and it just didnât seem like it wasnât going to end. Then I sort of realized you have control over your life so I was like wait a minute, I make these decisions not certain people around me. Sometime in 2004, maybe August, we were like letâs do this.
Chris: Itâs time.
Aaron: Why are we not playing music? This is just dumb. Because regardless of whether it works, itâs still really fun and it kind of fills up my life. 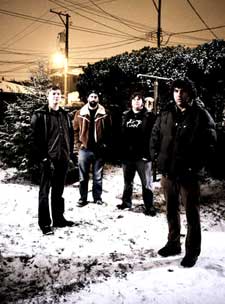 Mark: Itâs kind of odd that you guys have a song from the album on Budweiser.com, how did that promotion deal come about? Aaron: I have no idea.
Chris: I donât either.
Aaron: Weâre very proud though. We have a picture on the MySpace page that has a closet with Budweiser bottles lined up, so I wonder if they saw that.

Mark: You guys get any free beer because of that? Aaron: We should. We should have a Budweiser sponsorship card that we can present at any bar.

Mark: That would be pretty good. Are there any plans to get in the studio for your side project, Hundred Hands? Aaron: Not for me. I think Chris has some plans to finish up the Old Canes record, but Hundred Hands is pretty dominant at this point. Iâm way too busy with Appleseed.

Mark: Anything else you want to say, about the new album maybe or the tour going on now? Aaron: Well obviously weâll be on the east coast, close to all the places that someone will be able to come to. We certainly appreciate everybody coming out and we have our new big crazy red van, the Appleseed Mobile. [laughs] Weâre pulling a trailer, so hopefully we can bring more stuff and we can make the shows the best we can. Weâre looking forward to it, especially since itâs spring; itâs a good time of year to be out. Weâre just going to go and do our best and see what happens.

Smoke or Fire to record in June

Tours: The Riverboat Gamblers touring in the US