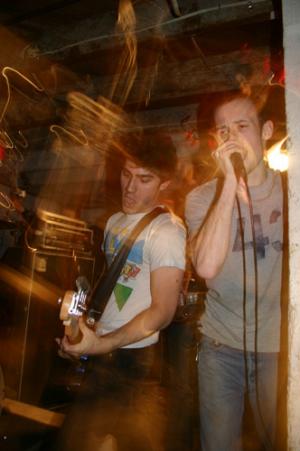 Former MP3 of the Week and Bellingham, WA's own Shook Ones plopped down in their van / second home for an interview conducted by myself last week after the Long Island, NY stop of their ongoing tour with labelmates Sinking Ships. Interested in discussion surrounding Fritos, Black Flag tattoos, and other legitimate issues?

The band will soon head out on the West Coast for a week with Paint It Black and the Loved Ones on the Big Deal Tour. They're also expected to release their as yet untitled, sophomore full-length some time later this year on Revelation, following up both the recent Slaughter of the Insole 7" and last year's Endwell-released Sixteen.

FUNDS: My name's Funds, I play guitar in the band, and favorite gas station meal is definitely a big Dr. Pepper with those honey barbeque twist Fritos. Guaranteed, I love those.

Yeah, those were definitely a favorite lunch break snack of mine.

Icebreaker question: How's it been on the road with Sinking Ships?

FUNDS: It's been exasperating. Those guys are real hogs for attention, you know. They won't -- [laughs] -- they won't let us play our own set without joking around. No, it's been awesome, they're really nice guys and they always take us out on tours that they do, so it's been great.

NATE (drummer): Careful with the sarcasm… 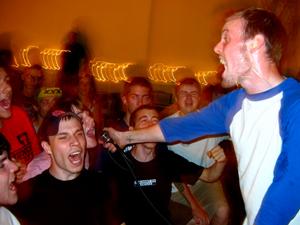 SCOTT: It's not like anyone's ever broken up with a girl over that…

FUNDS: Let's put that in the interview right there.

Who are some of your other musical influences?

FUNDS: Wow, that's a good question. Besides the obvious ones or the ones people always say… Kelly for example likes a lot of garbage ass pop, i.e. Taking Back Sunday and stuff--

…and I'm lookin' forward to the new one even.

KELLY (guitarist): The tracks that I heard--

Oh, the four songs that leaked…

It's not bad. The one song with the Police stuff going on -- almost a reggae beat, did you hear that?

Yeah! And he's trying to do the Daryl Palumbo thing in one song-- 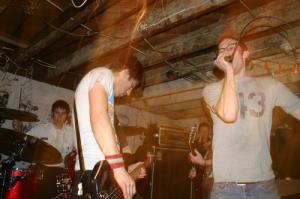 FUNDS: If there's one thing we need to scratch from this interview, it's Kelly saying Taking Back Sunday is "raging." [laughing all around]

KELLY: …and that single has that sweet thing at the end where he switches from the half-time to the slow time, but he mixes up the riff -- ah, it's so good! [silence, more sporadic laughter from unknown voices]

Alright, so on your coast, you've got bands like yourself and Set Your Goals. On our coast we have bands like With Honor, No Trigger, Crime in Stereo…even Norway has that super Lifetimecore band Death Is Not Glamorous -- have you heard them?

Is melodic hardcore making a comeback?

FUNDS: I think so, yeah. It seems like a lot of bands I've seen recently have singers that actually…sing. That's not neccessarily a good thing, because that could end up sucking real bad too, but yeah, it seems like there's a lot more bands who seem willing to go up that avenue of music.

Do you ever get shit for writing heartfelt, emotional songs that don't reference being "nailed to the 'X'" or brotherhood and unity?

FUNDS: [laughs] Not really, except for Nasty Nate's co-worker at El Camino. He thinks we're not a hardcore band and that we don't like hardcore… Fuck you.

NATE: [laughing with FUNDS] Who is that?

FUNDS: Put that in your interview.

Conversely, do you ever encounter any blatant shittalk in person or otherwise for the music? I can't imagine anyone saying "Oh, fuck you guys, Kid Dynamite was overrated anyway…"

FUNDS: [laughing] No actually, not really. Mostly people think it's really cool that people are really honestly trying to do a band that takes influences from them and Lifetime and stuff.

So Paint It Black tour at the end of this month… What will it be like for you touring with who you've openly admitted is basically the man behind the band's existence?

Do you have thoughts on the, speaking of whom, Lifetime signing?

You didn't hear about this?

Yeah, I guess since you've been on tour…

NATE: Who'd they get signed to?

Owned by Pete Wentz of Fall Out Boy. It's an imprint of Fueled by Ramen.

FUNDS: Well yeah, I didn't know about that; I knew they were doing a new record-- 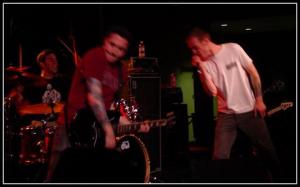 The rumor popped up like 2 and a half weeks ago, and 3 days later it was confirmed.

FUNDS: Whoa. Yeah, I never heard that. Well, speaking from my half of the band, the half of the band that thinks Fall Out Boy is terrible [laughs], I think that it's, you know, surprising. It'd be cool if they did it on Jade Tree; I like that label. But it's cool they're doing a new record, period. That's all I can say.

--on Paint It Black's myspace, saying "we have complete creative freedom"--

--"they're giving us the money to make the record we want to make…the new stuff is like the old stuff: fast melodic hardcore punk…"

What's in the CD player recently?

FUNDS [blows air between his lips in perplexion, I start to peer into the stack of CDs in the center compartment in the front seat]: What do we got in the CD player? Nate's gonna help me out with this one. We got--

FUNDS: Get this outta here. [laughter bursts open in the van] I hate that shit. Everyone in this band likes different music altogether. Nate for example hates punk--[NATE bursts into defensive laughter] I was listening to Sado-Nation the other day, and he said "Haven't they ever heard of compressors?? What is this shit?" [NATE laughs] That's right, Nate hates Sado-Nation and all punk [NATE continues laughing]. What do we all like? Dimension Zero…

FUNDS: Cam'ron…and, what's another band we all like really quick? Blacklisted. Blazin' that. And the new Iron Age.

It was a little too metallic for me.

Actually, the label even said "This is the most metallic thing we've ever put out." [minute laughter from both of us] 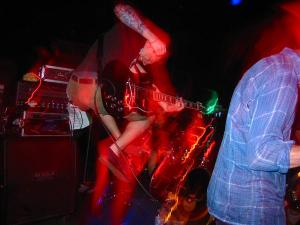 FUNDS: Yeah, could be the most metal thing Youngblood ever puts out.

Have you brainstormed any producers and/or studios for the next full-length yet? Say like, you got Bill Stevenson… Imagine the sound he could capture…

FUNDS: That would capture friggin' ridiculous. We've brainstormed a ton and everyone we've talked to doesn't want to record us--

Which songs from the teaser 7" will be on the full-length?

FUNDS [does the air-blowing thing]: Good question. If we remain as braindead and lazy as we have been recently, probably both. Twice. [NATE laughs] We're gonna record those twice off the 7" and have four new songs out of it. I have no idea.

FUNDS: Funds's Hair Is Beautiful. [laughter] I think that's gonna be the album title. But other than that, I don't know what else.. .Like I said, we're lazy [laughs], behind schedule.

Do you think Revelation's fairly recent Judge and Bold discographies inspired them to go on this hardcore signing rampage that included you, Sinking Ships, Down to Nothing, or do you think it was something bigger than that?

FUNDS: It was something much, much bigger than that. Two words: Bob Shedd. New A&R guy, Jersey Shore veteran…[NATE laughs]…crucial Jersey record collector… He's got all his shit together. The man is the real deal, and he is responsible for everything good that Rev is doing right now… And Jordan likes paintball [laughter at this drastically inside joke]. There we go.

What is the biggest issue you have with the hardcore scene, and conversely, what's the most positive thing you see?

KELLY [amidst lots of chatter]: Yeah, that's the only problem..

FUNDS [looking towards bandmates]: What is the problem with the hardcore scene right now? 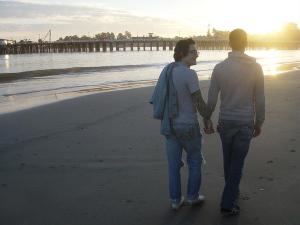 FUNDS: Yeah, unlike the rest of the world.

KELLY: Theoretically, the hardcore scene is supposed to be more progressive and--

FUNDS: Nooo, it's never been like that, it's always ignorant suburban kids--

KELLY: I said theoretically, didn't I?

FUNDS: I guess. I don't know if it's ever theoretically been like that. How about, not many Black Flag tattoos? There used to be much more of those.

FUNDS: I don't know. I don't have anything negative to say about the hardcore scene. Hardcore: Live it or leave it. Shook Ones. [clapping, laughter] Put that in the interview.

Thursday's "At This Velocity" stream posted