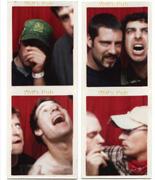 We sent our special operative Greg Simpson to talk with Chicago's Cougars in anticipation of the release of their new album Pillow Talk on Tuesday the 25th. He talks with Matt and Bryan about living in the shadow of a ska band and how having 8 people in the band can cut in on your bottom line, recording with Steve Albini and the joy of pingpong tables.

Pillow Talk will be the band's second full length, following their 2004 Manhandler EP and their previous LP Nice, Nice. You can stream their new album in full here.

Before we get to the new record, letâs talk a little bit about the background of the band to clue in people who donât know you guys. Bryan: Let's. Cougars came to be in its current form in 2000. We stake our claim in Chicago and surrounding parts. The band is the bastard child of various other bands that we had been involved in over the years. We' re nice when you get to know us. 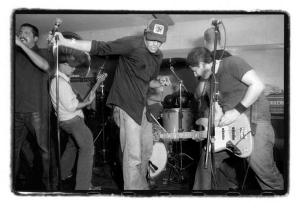 I knew and loved you guys when you were a dissonant, evil ska band named Hot Stove Jimmy. 5 out of 8 Cougars were in this band, for people who donât know. Is this part of your past that you are trying to detach from, or are you proud of where youâve come from? It seems Go Kart doesnât want to make any mention of ska roots. Matt: I am not trying to detach myself from the past, but I wouldnât say I am proud either. Cougars evolved out of that skanking machine so I guess you could say itâs got that going for it. Most of us in the band were in other bands during Hot Stove Jimmy that were more akin to what we are doing now. Overtime those influences prevailed and ska did not.
Bryan: Although a majority of the members of Cougars were in Hot Stove, it really wouldn't be accurate to consider it an extension of what Hot Stove was doing. There's a different approach altogether. As far as detaching Cougars from it, it's more a matter of accurately depicting the band. That's an issue with depending on promoting a band as "Members of…blah, blah, blah". First off, who gives a fuck? Second, that doesn't really say anything about what the band is doing. That's something I learned in high school after buying really bad albums because somebody from Slint did something on them. Cougars as well as Go Kart would rather avoid the pre-conceived notions that go along with all that.

[..] after they hear us, they're still saying "ska", then they should probably quit listening to music altogether.

Do you guys feel like people and audiences judge you prematurely for having horns or for having so many members? Do people label you a ska band for no reason other than the horns? Matt: People assume (and rightfully so) that we are poor because we have so many members. There have been a few different occasions where some guy in one of the other bands asks what kind of music we play and Iâll say something like, "Loud rock music with horns and a keyboard." Then heâll say something like, "Oh, so like ska." Then Iâll tell him, "Yeah, like ska."
Bryan: Yeah, I'd say people are a bit quick to judge. There have been several people that simply refuse to give the band a chance because of the horns. Oh well, I guess. People can say "ska" all they want before they hear us. Can't really harsh them for that. If, after they hear us, they're still saying "ska", then they should probably quit listening to music altogether.

Well then how would you label or describe your band to people who havenât heard you? Matt: Impending doom with horns and a keyboard.
Bryan: Calypso.

Who could Cougars site as influences? Matt: Most of the 90s Touch and Go catalogue, metal, classic rock, and Skin Graft.
Bryan: We should probably add some jazz cats for the horns. I'm not that schooled to start naming names.

So you had a full-length Nice, Nice in 2003 on GoKart that you recorded in your own studio, and an EP Manhandler in 2004 on Thick which had a weird recording story. Could you fill me in? I never really got the full story on Manhandler. Matt: We recorded all the tracks with an acquaintance and after we brought it home decided it sounded terrible. After that, we just went ahead and rerecorded it ourselves.

I draw my lyrics from the revolution of everyday life, hard drink, prescription meds, pornography, and hot sex.

Bryan: Yes. We recorded it ourselves, but found ourselves under the gun time-wise after spending all that time tracking it somewhere else. We redid everything and had it mixed and mastered only to determine that it still sounded like garbage. In order for it to be released by Thick when they wanted it, we had to do a crash remixing/ remastering session at the last minute. So yeah, not necessarily the best way to go about a release. The Manhandler's an asshole. But a tasty one.

Why the change to a different studio and producer for Pillow Talk? Matt: I think it had something to do with the ping-pong table at Electrical Audio and its close proximity to Hot Dougâs.
Bryan: Steve and Greg Norman did the engineering of the record at Electrical Audio. It was mainly a logical choice from an audio perspective of how we knew certain things would end up sounding in Steve's rooms through his equipment. We realized the limitations of recording ourselves and didn't want any of that to be a factor with the new record. And Electrical has a ping-pong table. Which I dominated.

Was it intimidating recording with a guy like Steve Albini who has such an impressive resume? Matt: No. Most of us had recorded with Steve before.
Bryan: No. He's a fucking nerd. Sam did wet himself a few times, though I'm not sure it was because of Steve.

Were there any suggestions Albini or Greg Norman gave that influenced or changed a song? Matt: Steve suggested that we wait till later in the evening to start drinking so the recording would go a bit smoother. Greg suggested that we drink something other than Old Style Lite.
Bryan: Mainly mix-wise, there were a few things. One in particular, at the end of "Delicate Whispers…" Steve suggested splicing in a different mix at the end to make it a bit more open and roomy. That tickled us. As far as how the songs are structurally, they all came out how we brought them in. There seemed to be a generally good understanding between Steve, Greg, and us about what kind of sound we were going for and what they could provide.

Has the bandâs recording or writing processes changed much as a result of being in a studio other than your own? Matt: We always have all the songs finished and ready to go whenever we go into record. I think it ends up being cheaper that way. Bryan: It's definitely cheaper doing it ourselves, but we spend way more time, shall I say, dicking around when we record things ourselves. The writing process is always done beforehand, with little extra things added in the studio. It's a give and take. It's great to have more time to experiment with different guitar harmonies or extra tracks of nonsense when recording things ourselves, which we did on "Nice, Nice". Some of that ends up being good, some a total waste of time that we realize isn't that great after the fact and can't be reproduced live. So "eh.." With recording in the "other" studio, it becomes more about precision and getting done what you need to get done and really focusing on what you brought in. When budgets are involved, there's definitely less time for "extras", but there's more focus. So, there's a tradeoff. 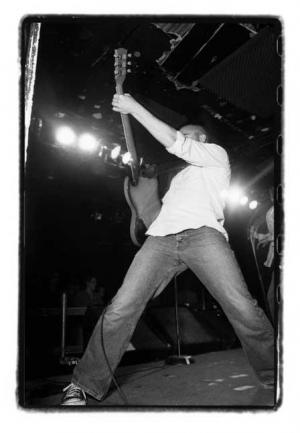 Who writes the songs? Is it a team effort? Matt: Itâs all team my man!
Bryan: It's definitely a team effort involving the random ideas of eight usually liquored assholes. It's as fun as it sounds.

Matt, your lyrics tend to be on the strange side. Where do you draw from? Are they meant to be funny, or just a bit out there? Matt: I draw my lyrics from the revolution of everyday life, hard drink, prescription meds, pornography, and hot sex.

This was recorded on analog tape and without the use of a click, correct? Why do you guys shy away from these technologies? Matt: We do not shy away from technology at all. In fact, we embrace it. We just like the warmth of analog as well as the warmth of Steve. Steve likes analog and we like Steve. It just felt natural.
Bryan: We're not technophobic in any sense. Ignorant, maybe, but not phobic. The horns were edited in ProTools before going to tape. Other than that we don't really see the necessity for the "super editing" that a lot of bands feel the need to spend their time with. All the cutting and pasting of entire songs is pretty generic. As far as click tracks go, drummers are supposed to be the click track. A lot of our songs are actually meant to have drags here and there. Best not be too robotic.

Do you guys still need to work other jobs to make ends meet? Having eight guys in a band sure splits the door money up a lot at shows. Matt: Some of the guys in the band are independently wealthy from centuries of exploiting the working class. Others have to work menial jobs that we lose every time we go on tour. The music business is for suckers.
Bryan: Yeah. Dollar #1 has still yet to enter our individual pockets. Well, that's not totally true. We did get $63.00 each for getting played on Road Rules. Most of what the band makes goes back into the band, with the occasional Bob Evans breakfast if everyone's good.

We don't really see the necessity for the "super editing" that a lot of bands feel the need to spend their time with. All the cutting and pasting of entire songs is pretty generic.

Was this recent European tour your first time playing there? Any crazy stories? Matt: Yes, it was our first time. Brett, John and Wnukowski all cut the tops of their hands and became blood brothers while I laughed at them and in Holland we put a plastic toy dragon in the gas heating system to destroy the evil dragon curse that had plagued us since our arrival. Basically it was like any of our tours, but with the Killer Wolf.
Bryan: The French poisoned us with their gourmet Four Jambon Virus. It slowly works its way through the bowels of rock bands stuck in close quarters. The only way to alleviate it is through a shot of Garlic Schnapps and a joy ride through Paris while hunting for a Korg MS 2000 that is immune to illiterates with power converters. Belgium has great beer.

Thanks a lot for taking time to do this interview, and have a good spring tour! Matt: Thanks bro.
Bryan: Ch' eah!