Contributed by William_David, Posted by Justin August Ska and Reggae Interviews 15 years ago

William_David sat down with Reel Big Fish ringmaster (fishmaster?) Aaron Barrett and shot the breeze for a bit. The two talked about being labeless, their new live CD and why exactly they keep recording cover songs.

I think the music scene is awesome now.

So do you have any plans for who is putting out your new CD/DVD combo?
Weâve got it all set up already. Weâve got all the distribution worked out and we are ready to roll. Weâve got a new live album coming out, and weâre putting it out ourselves. Weâre very excited.

You described the last album as a âfuck you, we quitâ kind of attitude. Did you have your departure from Jive basically planned already when you wrote this album?
Weâve been trying to get off Jive since 2000, before Cheer Up came out. They wouldnât let us go; we had some members of the band who were making everyoneâs life hell. People werenât getting along and it was a bad time for us, but weâve got it all worked out now. Weâve got some nice people in the band and weâre free, so itâs all good now.

You addressed the fact on your website that a lot people were questioning your choice to do another live DVD so soon? For the record, why are you?
Well, itâs three years later.

But only one album.
We got a new drummer, and a new trumpet player, and weâre a better band now. We had a whole new album since then. And that one really sucks [Show Must Go Off!] and it sounded really terrible. So, we wanted to do something weâre proud of, instead of something that makes us embarrassed anytime someone brings it up. You know what I mean? 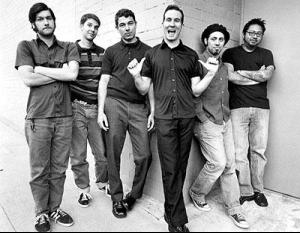 Can you give me any details on the split CD you will be doing with Zolof the Rock & Roll Destroyer?
I donât really know much about it yetâstill finalizing everything, but I believe itâs going to be duets. Famous duets from historyâ¦I donât know.

How did this all come about?
The record company that put out their EP or their album or something wanted to do a split CD, and we said âsure. We can do whatever we want, because weâre not on Jive records, woo hoo!â

A lot of your negativity is presented in a comic way, but underneath it all, how jaded are you guys, really, about the music scene right now?
The music scene or the music business?

How about both?
I think the music scene is awesome now. There are a lot of good bands out there right now. I was just talking with my manager the other day about how good of a time it was for music right now. The music business is just crumbling. Itâs over. Itâs in the hands of the kids, and the bands now. Exciting times. So, weâre jaded, but weâre also excited, because the revolutionâs happening.

So youâre excited bands are taking over?
I think itâs a good thing. Things could always go terribly wrong, but for now, things are heading in a good direction.

Are there any new bands youâre really into that you see as being âdeservingâ of more attention in the near future?
Shit. I donât know. I canât keep track. I listen to lots of good music all the time, but you put me on the spot, so I donât know. I donât know who I want to plug. So, instead, I wonât plug anybody.

Do you plan to do anymore with Forces of Evil in the future?
I donât know; weâre kind of on hiatus right now. Iâm really busy with Reel Big Fish. Iâm either in the studio or on tour, soâ¦

I have a million songs I want to cover.

This is not meant as an insult to him, but why doesnât Matt Wong ever do much at your shows?
Why doesnât he do much? He plays the bass.

But opposed to you guys jumping around and doing silly crap, he just kind of hangs out in the back corner most of the time.
Heâs just not a jump around kind of guy. He doesnât want to get hit in the face with a horn or guitar flying through the air. Thatâs just what he does, but he never messes up, so thatâs pretty awesome.

Not long ago, you guys did another tour with Zebrahead and Goldfinger, which is a tour thatâs been rehashed a few times now. Do you all still maintain a close relationship?
Yeah. Weâre still friendsâgood friends. Weâve done that same tour almost everywhere in the world. I think itâs time to get some other bands to tour with.

You guys always do a few covers on every album, how do you figure out which covers youâre going to do?
Thatâs a good questionâ¦I have a million songs I want to cover. A lot of times itâs for comps and different things, or tribute albums. So, they kind of give us a theme. Otherwise, I have a million-billion songs I want to do. Whatever I want to cover at the time. Itâs pretty random how it comes out.

Are you guys working on any new music right now for anything besides the live album?
Yeah. Weâre always thinking about new stuff and coming up with bits of songsâthrow âem on the pile and eventually theyâll turn into whole songs and weâll have a new album out. Itâll happen. Maybe next year?

And is there any tour support planned for the live stuff?
Yeah, weâre going to do a big summer tour with MXPX and Streetlight Manifesto.