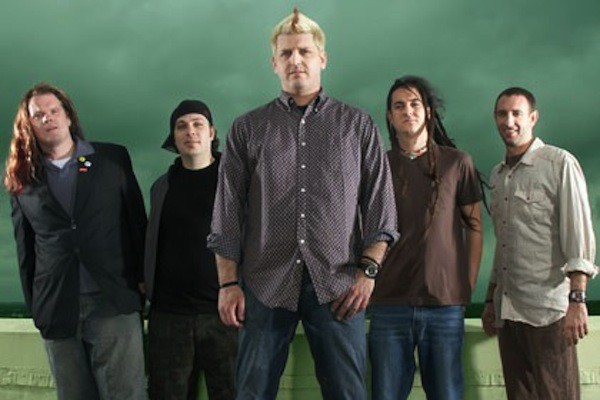 While the band is on tour in Europe right now, I had a chance to exchange some emails with co-vocalist Roger Manganelli. We talked a bit about major labels, horns and even Rehasher.

The band is touring in support of their upcoming full length, In With The Out Crowd. The record follow the band's 2006 EP Absolution for Idiots and Addicts as well as their 2003 Warner debut, Anthem. In 2004, Roger also released a full length with his other band, Rehasher, titled Off-Key Melodies. 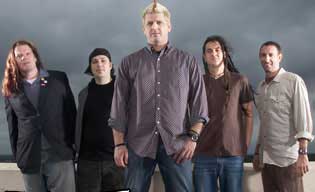 First of all, you guys have been doing this for almost 15 years now. How does it feel to be coming up on that anniversary and being one of the "influencers" rather than some new band?

I didn't know that anniversary was coming up! i'm very happy that we've been able to stick it out together… it's cool to meet a young band, and they tell you that they have listened to you forever; that's just how I was when I met the Descendents…

For your last few albums, you have been moving away from ska/horns and that has upset some fans, but you guys have been gaining lots of news ones. Do you feel you need to strike a balance between what people expect and what you want to do? Does that even factor in when you're writing?

I think that we still do what the song is asking for; you can't really control what kind of songs come out while writing,, so if the songs needs horns, we'll do some horns, if not, then that's ok too. We really don't think too much about what our fans want us to write, we just try to stay true to what is best for the song.

For the last album, I interviewed Vinnie and he mentioned that he had mixed feelings about a major label. You guys are coming upon your second full length release on Warner, so I was wondering how the experience has been.

I think that we still do what the song is asking for; you can't really control what kind of songs come out while writing,, so if the songs needs horns, we'll do some horns, if not, then that's ok too. We really don't think too much about what our fans want us to write, we just try to stay true to what is best for the song.

It's all right,, they seem to be backing the new record, and aside from the typical major label red tape - where it takes forever to get things done - I think Warner is still into the band.

Can you tell us what exactly happened with Chris in the video shoot? There are a lot of vague details, but no one seems to have the whole story.

We ran into a mall, and ran throogh the song and then some overzealous security guy at the mall thought he'd impress his boss with an arrest. It was dumb, the cops really didn't wanna arrest chris, but it was the mall security guy that was really was being an asshole and so Chris was detained, and booked. It was a pain in the ass, but at least we got him out with enough time to finish the video.

Any WB stars set to appear in your videos again? Any big plans or concepts in the works?

No, no plans for anything like that; the video will speak for itself when you see it!

With Less Than Jake keeping you so busy, is there any chance we'll get another Rehasher record? Speaking for myself, I really loved it, and I hope you guys get together to do another one.

I have a lot of stuff written but two of the guys are in another band (Bullets to Broadway) now, and they are busy as well, so it's just a matter of finding the time to make it happen. I'm not giving up on it, but it does feel like its 100% up to me.

I also have been producing/recording more and more, and that takes time, too. But that's what i always wanted to do, work on music,, so it's not a bad thing.

That brings me to my next question; Vinnie has FBR which has really blown up, Roger has Rehasher, JR has CT Mafia and his solo work, so a good chunk of you guys keep really busy with other things. Is it hard to get the band together to write and tour?

No, I think that all of our other stuff is secondary to LTJ.

Punk rock, ska and hardcore seem to be continually evolving and I know Vinnie has a first hand look at that with his label, but I'm wondering what you guys think of the scene and the huge success of this new style of screamo/emo/etc. music.

I don't pay much attention to what is popular to be honest. It's a never ending cycle - style comes in and out of style - I try not to get caught up in all of that, and just listen to stuff i like, and play what I like; popularity is overrated.

Speaking for Punknews.org specifically and the internet and news media and general, you guys have some really, really devoted fans. Any trace of news from you guys seem to elicit a lot of excitement. Did you ever think you'd have this kind of fanbase?

i'm stoked that we have such hard core fans but I've never thought about it. It's been there all along,, and I think we are really lucky. I think all of the singles, and picture diskc, and toys and that sort of stuff has kept the collectors out there stoked. 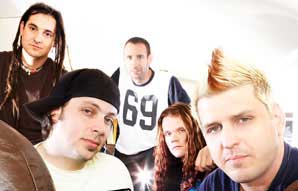 I wanted to say that the studio photo/blog was a really great idea and Vinnie's journal is also a lot of fun. You guys have really opened up the process but I wonder if it feels weird to be so "exposed" really. Obviously you can have fun with it, like all of Roger's signs, but does it feel odd to have all these people looking at you?

I don't think its odd. I think these days, with the internet and DVDs with every CD, fans want more content, so you give it to them! I always loved watching the making of videos of bands that i like , so we thought that our fans wanna know some of our behind the scene stuff.

With the last few albums - Anthem and Borders in particular - Vinnie talked about the darkness in his lyrics. I've only heard about half of the new album, but I haven't grabbed a theme yet. Is there one?

I think everyone can take different things from the lyrics, so it's up to you if you feel there is a theme,, to me , it's obviously LTJ lyrics and so it's always sort of dark, yet positive at the same time. I think the lyrics usually have some sort of light at the end of the tunnel ideal going on.

I've been told that Vinnie is the main lyricist and you're is the main songwriter, but I'm wondering if you can tell me a little more about how you put together a song.

That is true to a degree; I usually have songs ideas demoed out, and I will pass them off to vinnie, and he will focus on the lyrics. Then we all get together, work out the nuts and bolts of the song, kick around some changes and everyone is involved in the finishing touches. Chris will do the same, bring in a song idea, and we'll all throw in ideas and the songs just evolve. Some songs change very little from the initial conception, (like a new song called "In-dependence Day") and others really go through many arrangement changes/lyric changes, (like "Still Life")

What's in the works for Less Than Jake for 2006? Of course, these next few months are crazy busy, but with the album coming out I'm sure you guys have some interesting stuff in the pipes.

We are currently on tour in Euro-land. We will be on the Warped Tour this summer, and some plans for UK festivals, and maybe a tour down in Australia. So more shows, few showers, and many many miles to go this year.

Gone From The Start and Hope Republic on Rossstar tonight