Mark Rowan sat down with Keith Buckley, vocalist of spastic metalcore band Every Time I Die, to chat. They two went over some thoughts about the band's upcoming album, the joy of Cheetos and the most worn out internet meme since All Your Base or First!.

We last spoke to Mr. Buckley in 2003, between the release of that year's Hot Damn! and 2005's Gutter Phenomenon.

So I heard all the instrumentation is done without you and when itâs finished you add the vocals, why do you go about things that way?
I really donât know, I think itâs mainly because I know that Iâm completely inept when it comes to writing music, [laughs] so I donât think Iâd have much to say in the instrument department. I donât even really know what to get a feeling for; I really have to hear the song. It sort of dictates what kind of mood the lyrics will take. I like have some sort of structure or else I canât even think of writing any lyrics without any sort of structure. Itâs always worked for me; itâs what weâve been doing. When we first started we didnât know any other way to do it and it seems to be working just fine for us.

There was a van accident earlier this year; can we expect a song to be written about it?
[laughs] Thereâs going to be a bigger and better van accident this year. Weâre going to top the last one.

So thatâs your goal?
Yeah, that one was a pussy flip. We are going to do some cartwheels; we are going to get at least two and a half turns out of it.

Have you heard about the movie Snakes on a Plane?
Oh my girlfriend just told me about that, itâs so fucking weird you just said that. Is it awesome? Iâm sure itâs going to be awesome, it sounds awesome.

Itâs going to win at least eight Oscars.
One for each snake on the plane. [laughs] As far as animals go in movies, you have King Kong and Narnia, all these other movies with animals and not a single animal has won an Oscar. So Iâm fucking rooting for the snakes this time.

Yeah, I donât think King Kong has shit on this movie.
Iâm going to look up the trailer when this is over.

Itâs pretty good, actually Gutter Phenomenon has a bunch of snakes on the cover and Snakes on a Plane comes out 5 days before the anniversary of its release, is this a huge-genius marketing campaign for record sales?
Perfect! We had an in with the studio that made the movie. You know when Blair Witch came out they started promoting it like a year before kind of like "what is a Blair Witch?" and "Is it a real documentary?" So this is all sort of the plan to put snakes on the cover about a year before the movie came out.

Itâs a great plan, has there been any work on the next album yet?
No, absolutely not. I think weâre going to start this week.

Do you have any idea what kind of direction itâs going to go in?
I donât really know. Iâm hoping that it goes into a more basic rock feel. I like a lot more groove in the next record. We sort of started in that direction with "The New Black" on this one. Iâd like to use that song like a springboard for more songs on the next one.

I just read your site about that guy misquoting you and all and I was thinking to myself youâre going to hate doing another interviewâ¦
Oh no no no. That was an exception to the rule. Iâm going to take cues from Howard Stern on this one and never try to be funny in print because stuff like doesnât come across and then you end up looking like an asshole.

[…]never try to be funny in print because stuff like doesnât come across and then you end up looking like an asshole.

Whatâs some advice you can give to journalists about capturing a personality or presenting a band in the right light?
I donât know. I wish I knew that was a problem beforehand. Use more emoticons, more smiley faces in your interviews when you print them. [laughs] Little parentheses with chuckle. 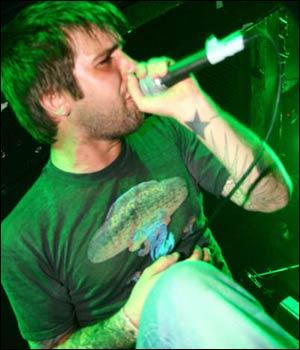 Make sure the laughs are in brackets.
Absolutely.

How would you suggest for journalists to make up better lies?
Oh god. I would just completely disregard the whole interview in itself and make up lies that are so unrealistic so there is no controversy.

Just get creative?
Absolutely. Let yourself go. Take a bunch of hallucinogenic drugs and just make up an interview.
Oh! David Koechner is in this movie Snakes on a Plane, huh?

Who?
David Koechner he used to be on Saturday Night Live and he was in that movie Waiting, the one about the restaurant.

I know Kenan from Kenan & Kel fame is in it.
Oh really?

Yeah, I think heâs going to steal some awards from Samuel L. Jackson.
Is he in it? Holy shit, he is in it.

I hear thereâs a rumor that he says, "get these mother fucking snakes off this mother fucking plane."
You know how many CDs are going to have that as samples?

Youâre taking Chiodos on this tour, who else?
Cheetos? Fuck yeah we have Cheetos.

No no, the band. Chiodos, I think the name is.
Oh yeah that. Iâm like "Fuck yeah we love Cheetos." I donât know who else is going to be on that to tell you the truth. It was a last minute thing. I know weâre jumping on a show that has a bunch of bands already on it. I think itâs only two shows with them, they are the only ones specifically locked in at this point.

So youâre a pretty big Simon and Garfunkel fan, what are some other bands or artists that you listen to that people may not expect?
That people make fun of? Counting Crows. Basically Iâm a sucker with anything with a girl singer. Thatâs why Iâm really excited to see the Sounds on Warped Tour.

Eh, I donât think they are going anywhere.
Yeah, [laughs]. He is Legend I fucking love. I donât know if they are up and coming. We just finished a tour with them and they were awesome to watch every night.

You guys seem to be pretty big partiers on tour, whatâs a crazy tour story you can tell us?
You know what? every single crazy tour story has been compiled and put into our DVD which is coming out soon. Thereâs a lot, Jordan lit his head on fire. Iâm stoked for people to see it. So Iâll reserve that. There are some snakes on a plane.

Snakes on a tour bus?
The craziest tour story was when we were flying to Japan and there was a bunch of killer snakes on a plane.

Was Samuel L. Jackson there to help you guys out?
Yeah, he was in coach. [laughs]