Contributed by aubin, Posted by Justin August Nitro 15 years ago

The Aquabats have gained a new member. Eagle "Bones" Falconhawk will be taking over guitar duties from Chainsaw, the prince of Karate who injured himself just prior to May.

The band has also revealed the content of the DVD portion of their re-release of 2005's Charge!!. In addition to the EP being remastered with extra tracks, the DVD will include the "Fashion Zombies!" video, "making of", and commentary by The MC Bat Commander, Crash, Jimmy The Robot, Ricky Fitness and Bob. Also featured will be "What About Charge?!?," a 45-minute documentary of the band discussing the record, footage of the band's photoshoot for the cover and more.

The band is currently on the This Better Work Or We Are Dead Tour 2006 with The Aggrolites and Whole Wheat Bread. 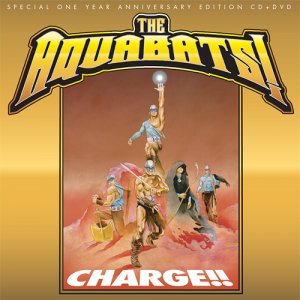