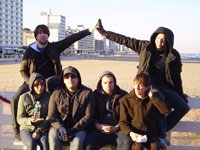 Contributed by MarkRowan, Posted by Justin August Interviews 16 years ago

Farewell to Arms recently sat down with cub reporter Mark Rown for some chit chat about the band, their demos and working at FedEx.

The post-hardcore band from Storrs, Connecticut is set to record demos before their summer tour is kicked off in June. The tour will take them around the country for two months. Songs from their self-titled EP are available for preview on their Myspace page.

You guys played University of Hartfordâs Spring Weekend, how do you think the band compares to "legendary" rock and roll bands that graced other spring weekends this year like Lifehouse and Guster?
Tyler Soucy: Those bands are legendary?

Well legendary is in quotes.
Tyler: Oh ok. Well, itâs awesome that they [University of Hartford] had us. We played there during the fall semester as well. So for them to ask us back to play Spring Weekend was a huge compliment. As far as comparisons to the other bands…they're much more popular than we are, so thatâs cool. Right?

You are on the Orange County Drum & Percussion's roster, what exactly does that mean? And how did you land it?
Tyler: Orange County works as a family with its artists. I talk to them a lot about ideas that I have for drum kits and some other custom things. They can pretty much create any idea for me that is in my head. As for the benefits of being on the roster; I suppose I now have a much closer relationship with them, as well as a price discount. I've always been a huge fan of OCDP since I began drumming, and being on their artist roster is honestly such a dream come true. I don't even know what else to do with myself now. I got my endorsement when I flew out to L.A last year on vacation. I stopped by the shop with a press kit that I had been working on and they called me up the next day. It was an amazing moment in my life to say the least.

You recorded some demos recently, how much more recording do you plan on doing and how do you think they will be released?
Tyler: We're recording everything that we're writing right now. We're planning on having two of the new songs finished by tour to freshen things up. Right now everything sounds awesome, but I'm not sure if we'll ever put these demos out to the public. We may be too big of perfectionists, but we'll see. Hopefully if things go well we can pay another visit to our producer Jesse Cannon after this next tour, and record a song or two.

Do you have any plans for a full-length album anytime soon?
Tyler: Probably not. I donât see the point of recording twelve songs that no one is going to listen to.
[laughs]

Youâre kicking off a two month tour starting June; do you find it harder to book shows as you get further away from Connecticut?
Justin Smith: Weâre lucky enough to have Ali.
Tyler: We have an Ali. Not everyone has an Ali. Some states are actually easier than Connecticut. Like Florida we get tons of shows all the time.
Justin: I donât think itâs relatively that hard for Ali to book shows, but itâs hard to get good shows being a local act.

Whatâs it like traveling in a van for a month with five other guys?
Tyler: Smelly. Sweaty. Hot. Lots of man-on-man ball touching.
Justin: Itâs fun before and after, but duringâ¦
Tyler: During it seems not fun. Talking about it is fun.
Justin: We have tons of stories so.

Have you sent any demos to record labels?
Mike Ryan: The only band thatâs gotten signed thatâs popular from sending their CDs to labels is Chicago. I read that in this record industry book I have. Most labels donât sign bands from them sending in things that they have.
Tyler: Ali sends press kits to almost every label, but like he said no one listens unless itâs Chicago.
Mike: But Fall Out Boy is awesome either way. [laughs] Put sarcasm in quotations or whatever.
Tyler: That doesnât make sense at all; well they are from Chicago I guess. 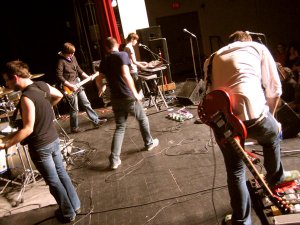 What are the advantages or disadvantages to being a band in Connecticut?
Tyler: Thereâs not a lot of touring bands in Connecticut, so itâs hard to make friends in that aspect.
Mike: All of our friends that our in bands live far away. We donât have a lot of friends in Connecticut. Our best friends are in this band called Lowercase from St. Louis. We have other friendâs bands from Pennsylvania and far away places that we donât get to play with.

How was playing the Hartford date of Taste of Chaos helped expand your fan base?
Mike: Somebody recognized Justin at the mall.
[laughs]
Tyler: Yeah, that is pretty much it.
Justin: I was with my Mom at the mall and some kid started following me down the escalator with my Mom. And then he walks up and he does this. [Justin does some weird mall-stalker-walk] And somehow Iâm still walking. "Are you in Farewell to Arms!?"
Mike: That was before Taste of Chaos tooâ¦so nothing. [laughs]
Justin: Oh yeah that was after we played with Saosin.

How was Taste of Chaos though?
Justin: It was fun to play on a big PA.
Tyler: It was cool; it was a lot of fun. We played with The Receiving End of Sirens, theyâre cool.
Justin: It was very awkward at first because we felt like little kids on a field trip. Like, "You canât walk over there!" "Donât talk to them!"
Tyler: "You canât do this." "Donât talk to the bands if they donât want to talk to you." They were pretty much afraid weâd just be douche bags. But we were like,"Weâre not douche bagsâ¦weâre alright.
Justin: They kept telling us peopleâs names like, "If you want this you got to talk to him and have him talk to her." And weâre likeâ¦"What?" Weâre just going to play and then sit around.

Also, how much do you think the internet has helped you guys get your music out there?
Justin: 100%
Tyler: Itâs the only thing thatâs gotten our music out there.
Justin: Thatâs how people hear of us, that and the Ernest Hemingway novel.

Did he write that about you guys? [laughs]
Tyler: Yeah itâs an autobiography of the band.
Justin: Yes, World War II we were there.

Do you feel bad that you peed in the ocean so many times as a kid?
Justin: Who told you?
Tyler: Was that really the question?

Yeahâ¦it was. [laughs]
Tyler: What? Fish pee in the ocean.
Justin: I was taking a shower with my brother and my dad. [laughs]
Justin: And water was running off my Dadâs penis and my brother thought it was urine so he started peeing. And then he got yelled at by my Dad and was put outside the shower.
Tyler: He was just sitting naked outside the shower?
Justin: There were three men in the shower isnât that weird enough? There was pee everywhere, on our feet probably. You can write that as long as I get a copy of it.
Tyler: "As long as I can show my Dad." [laughs] Heâd be so "pissed".

If Farewell to Arms was a bad soap opera, who would be the crazy old lady that gets killed and then somehow comes back to life to wreak havoc on all the other members?
Tyler: Seth, but then heâd come back as Pete Weiland and then heâd be good. [laughs]
Mike: You canât put that in.
Tyler: Why not? No one has any idea of weâre talking about. I donât watch soaps. What is a good soap?
Justin: As the World Turnsâ¦just kiddingâ¦me and my Mom used to watch soap operasâ¦

What do you know about "crunk"?
Tyler: I know nothing about crunk.
Mike: I know this because I watched TRL yesterday. Lilâ Jonâs new CD is called Crunkrock and itâs going to be a mix of crunk and rock music.
Justin: So itâs going to be Korn?
Tyler: Why canât it just be called "crock"?

I donât see the point of recording twelve songs that no one is going to listen to.

Anything else you want to say?
Mike: Donât ship FedEx. I worked at FedEx for like six days and itâs terrible. I broke so much stuff. All the stuff is already broke and then we break it more. It gets thrown off of trucks by people working there by the hour. It gets put on this moving belt and every place it gets scanned it smacks each package. It gets annihilated and then it comes down and gets loaded onto another truck. So it gets broken three times, so go UPS.
Justin: Buy our CD.
Tyler: Yeah, buy our CD.
Mike: We recorded it in a warehouse.
Justin: Where My Chemical Romance recorded their first video.
Tyler: Who are they?