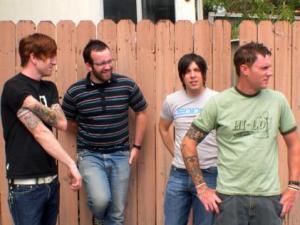 Reporter in the field Mark Rowan sat down with Cleveland Rock City's Brandtson for a chat just prior to their new album Hello, Control's release. He and frontperson Matt Traxler talk about how the change in lineup affected the album's outcome, t-shirts and whitewater rafting.

So tell me a little bit about the album, Hello, Control.
This for us is a big step. The album is a whole lot different from the previous stuff weâve done. Weâve been a band for about nine years now and right before we started writing this we got a new bass player who also does a lot of electronics, and programming, and that sort of stuff. So it was something we had in mind before we even started writing that we wanted to go a different direction with this album. And before our last bass player John quit, we asked Adam to join. Shortly after that John quit the band and Adam took over on bass. So we just ended up writing the entire record with Adam. I donât know, we are all really, really happy with how the record came out. Like I said it is a whole lot different from our previous records; itâs a lot more dance-y? I guess. Thereâs a lot of electronics, a lot of keyboards and synthesizers, drum machines, and stuff like that. But, at the same time I still think it sounds a lot like us. I donât know, we just worked really hard on this record and we worked really hard to try to change things up from what they were and weâre really happy with how it came out. So I just hope other people can get into it.

You think the change of the bass player is what really changed the sound of the album?
Well, I think having Adam in the band definitely changed how the album came out. It was something that we had decided we wanted to do and kind of go in this direction before we even asked Adam to join the band. We had started writing songs and recording quick demos with a lot of that stuff in mind and then from there we kind of gave them those tracks and let him go where he felt like going with them and weâre happy with it. It was definitely a conscious effort before he entered the picture, but having him in the picture really fleshed out what we wanted to do with the record and kind of complete the vision for the album.

So one of my favorites off the new record "Earthquakes and Sharks" is going to be on the OC tomorrow (last Thursday), do you happen to be a fan of the show?
I personally have only seen a few episodes. I think Jared, our drummer, watches it sometimes; Iâm not sure about the other guys. Weâre super excited about that. These are the songs we wrote fooling around in our band room and kind of had fun with, so itâs cool to see something that we wrote and have a good time doing on television and have a lot of people hear it. Itâs pretty exciting. Like I said I only caught the show a few times, itâs one of those things where everybody I know seems to be into it and I just never really followed it a whole lot.

Choosing a cover song is almost choosing a song that almost everybody is going to know and something that is somewhat respectable… or I guess not in the case with Justin Timberlake, but that was just fun so…

Howâd you land a musical spot on the show?
Iâm honestly not sure. I think it was all Paul, the publicist over at Militia Group. I guess he sends copies of all the CDs to them and a handful of other shows. I guess we just got lucky that they liked that song and it fit with what they were trying to do. So, kind of got lucky with it.

You did a song by the Police on that tribute album and you have 2 covers on your website, what would be the ultimate song for you to cover?
I donât know. Weâve decided to cover a million different songs, but it just never happens because we can never get everyone to agree on them. All the ones weâve done up to this point have been a whole lot of fun. The last couple tours out, we did "Cry Me a River" by Justin Timberlake and that song got a really good reaction from the crowd and was really fun to do. Previously we had done "Today" by Smashing Pumpkins which was a lot of fun. The only other thing we recorded was SinÃ©ad O'Connorâs "Black Boys on Mopeds" way, way back in the day. I think we started to record a cover of a Morrissey song called "The Boy Racer" and that one never saw the light of day. There are so many songs out there that would be fun or are really good songs weâd like to do, so I donât know if I can answer what would be the perfect song would be. I think itâs just a matter of a song that we all like that we think would be good to do live. Itâs almost choosing a song that almost everybody is going to know and something that is somewhat respectableâ¦[laughs] or I guess not in the case with Justin Timberlake, but that was just fun so…

I saw a video of you guys making t-shirts; do you make all of your own t-shirts?
Noâ¦I do all the design so yeah in the fact that I design all of the shirts and we get them printed. The case with that video was that we just did some shows in Japan and we flew over to Singapore to do one festival when we were there. And we sold almost everything we had in Japan and had no merchandise left for the show in Singapore, which wasnât a huge deal at first because weâve done this festival two or three years before and there was maybe 500 to 1,000 kids there and we didnât sell a whole lot of stuff. So we werenât thinking we were going to need much. But we got there, the festival is all weekend and we weâre playing Saturday night and we went there Saturday night and there was about 10,000 people there. So there was just a huge ordeal that we werenât expecting that many people to be there and we had no merchandise to sell. So we were like, "Well letâs try to get some shirts done real quick." With just doing it overnight there was nobody that could do it, so we just bought some blank t-shirts and cut a stencil real quick and got some screen printing ink and just stamped out our own real quick.

This is kind of a weird questionâ¦if you had to describe your sound as a white water rafting experience, what would it be like?
[laughs] That is a weird question man, I donât know how to answer that. I think it would be kind of a smooth ride down the river. [laughs] I donât know. Jeez, Iâm not really prepared for that one. [laughs] Oh man, a smooth rideâ¦maybe a few little waterfalls. 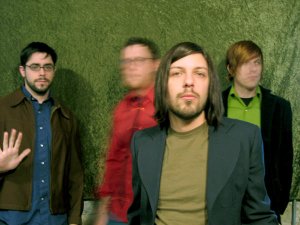 Anything else you want to say, maybe about the new album or the current tour with the Rocket Summer?
Weâre really excited. This is our first time back on the road in over six months. We took a long break to work on this album and record it and get ready to do it live. We put a lot of work into so weâre super excited to get back onto the road and hope to see a lot of familiar faces. And hope to see kids that we know come back out and hope to see some new faces. Hopefully people will go check out the new record.

Blacklisted drops off tour with Ignite