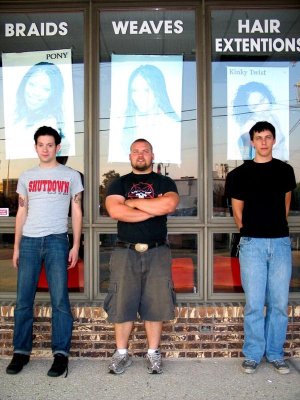 The band recently released their PNR debut, Apocalypse in Increments , and is in the midst of a summer tour.

It's about doing the right thing. Even if it's something where you're subject to hit a brick wall and have problems along the way, it's still ultimately the right thing for you, and that's why you're pushing towards it.

How exciting is it for you guys to be part of a new record label, in signing to Punknews Records?
Nick: I think we're all really, really excited about it. We're really glad to be working with these guys because they care as much about music (I think) as we do, and they're really excited about it too.
Terry: They seem to have a nice team put together, between the bands and the label, because SOMERSET, too, the other band on the label, they're good guysÃ¢?Â¦
Nick: Yeah, they're very good guys.
Terry: Everyone, definitely, is very focused.
Nick: Everybody's really passionate about it, and they're just getting into it'same as we, for the most part. It's exciting to be doing it all together.
Terry: A lot of new experiences for us too, which is exciting. We had a little bit of experience with our last CD, but this is totally on a new professional level for us, that we're adjusting to, but we're enjoying the adjustment very much.

Was there a lot of thought that went into the signing on your end, or was it something that was offered and you knew you wanted it right away?
Terry: It was pretty unanimous. Someone was willing to back us, and that was exciting. We had known the Punknews.org people, and we'd been friends with Scott and in touch with Scott. They'd done some really good reviews for us in the past. They've always been kind of'on punknews.org'we've always had aÃ¢?Â¦
Nick: Ã¢?Â¦They've helped us out a lot.
Terry: So when we heard they were starting a label, I actually overnighted Scott a copy of our Epitaph demo that we did. He got it overnight and we pursued it right away.
Nick: We didn't have a lot of options really, but I don't think that we would have chosen somebody else if we had options.

What was it like working with Dan Precision on the new record?
[All laugh]
Terry: He's a maniac.
Greg: We've all become really good friends with him. It gets frustrating sometimes, being in the studio and butting heads with everybody, but it's always good to have him there, because it's not so professional; it's friends.
Nick: We've done like 5 recordings with him, and over the course of time, we've just become good friends with him and he's been like a mentor to us the whole time.
Terry: He teaches us so much. We come out of the studio a better band and a more solid band, because he pushes us creatively, but we're totally good friends with him.
Greg: Whenever we're stepping into something new, we always call him like, "What should we do?"
Nick: He's a good guy'really giving. Aside from all the professional success he's had musically, he knows everything. He's very talented'knows his shit backwards and front, and he's definitely helped us out a lot.

In your own words, how you would explain the concept of Apocalypse in Increments?
Terry: I think lyrically, it's making a decision to fully pursue something, even though it might not be the safest route, but if it's something that you feel strong enough about, pushing it to the fullest and embracing every imperfection and embracing every tile that you get along the way. Taking it and benefiting'becoming stronger from it. Knowing that you're doing it for yourself, ultimately, and just pursuing itÃ¢?Â¦
Nick: It's about doing the right thing.
Terry: Yeah. Even if it's something where you're subject to hit a brick wall and have problems along the way, it's still ultimately the right thing for you, and that's why you're pushing towards it.

Your website marks this as your debut full-length, but you already released one on Double Zero Records, right?
Nick: We did, but it didn't really work out as planned. Basically, it was a self-released full-length. We got permission to put the logo on it and say we were on Double Zero, which helped a lot actually. How things are nowadays, if you don't have some kind of name to say stands behind you, people won't really take you seriously. So, that got our foot in the door in a lot of things. . . But for the most part it was just a self-released album. 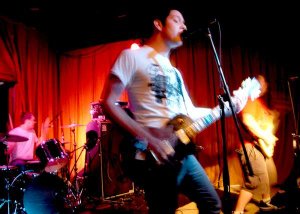 Before becoming Ryan's Hope, you guys were basically a hardcore band. How did you settle on this new direction for the band?
Greg: The three of us were in a hardcore band with two other guys, and I was playing guitar. We were in that band for like 5 or 6 years, and it got to the point'when that was done, we just wanted to not have 5 people, just keep it as minimal as possibleÃ¢?Â¦
Nick: We wanted to try something new. We wanted to have fun with it again. It was fun, and then we got kind of jaded with hardcore'just how things were run overall, and we wanted to have fun with it again. Rock seemed like the way to go. We just wanted to make rowdy, fun music. We were all kind of into different stuff too. We've always been really into WEEZER, actually. Terry, at the time, was really into ROY ORBISON and a lot of older stuff. I got really into'I'm going to say it Greg. Don't get mad at me. I got really into rockabilly. Also, we expanded our base of what we were listening to, which was pretty much exclusively hardcore, punk, and metal'a lot of metal. We branched out into a lot of different kinds of punk, and a lot of straight up rock.
Terry: It was a really exciting couple of months when we decided to do it. We had issues with our old band'as far as dedication went'that we kind of ran into. When we made the decision, 'let's have fun with it,' have it be a three piece, have Greg on drums, me sing. It was such a new thing for us; I think it was really exciting.
Nick: I think, too, the fact that we cut down on members and we were pretty much all into the same things at the same time, helped ease the songwriting process. It was new and exciting'time for fun, I guess. But it was kind of scary, because Terry had never sung beforeÃ¢?Â¦
Terry: Ã¢?Â¦The first few demos are pretty awfulÃ¢?Â¦
Nick: Ã¢?Â¦Greg got on drums for the purpose of this band.

If a fan only had $1 to spend on your music, which song off the new record would you tell them to download?
Greg: I'd have to say track 3, "The Carpathian." I'd have to go with that just 'cause it's kind of everything that we like to go for. It's rowdy. It's got catchy vocal melody, but it's still heavy. Just a good mix of everything we wanted to go for when we started the band.
Nick: It's really tough for me to decide between that song'it's rowdy, it's energetic, and lyrically it's really cool'really creative melody. But number two'I've been kind of hung up on that as one of my favorites of the album. "My Motivatio
Nick: Your Demise" I think is one of his strongest songs, lyrically. It says a lot about what we stand for. Musically it's got everything, like Greg was saying. Those are the songs I like the best.
Terry: I'd probably say "Carpathian," but a close second would be "By the Sword," number eleven. It's a little heavier'definitely chunky. It's got lead, and good driving beat, but I think "Carpathian" is a good call.
Nick: I like all the songs.

Being labeled by AP as one of the bands to watch this year, and with a lot of the hype and good reviews coming in, do you have high expectations for this album?
Nick: I hope it does really well for a number of reasons. For one, I want to do music as my living, and I don't care if I get huge, but I just want to be able to keep doing it, so I hope it does well. Plus, I hope it does well for the guys that took a chance on us (Punknews)'I want them to succeed too, because this is what they want to do. I want it to do well, but whether that happens or not is yet to be told.
Terry: I think we have big expectations. We've made an album that we're definitely proud of and we want to share it with as many people as possible.
Nick: He said it best; we're definitely proud of this album, so we think it deserves a lot of play and a lot of people listening to it.

You guys are from Joliet, but being in the vicinity, are often labeled as a Chicago band. Does the location really make a difference?
Greg: Not that much, but I like to follow in the footsteps of 88 FINGERS LOUIEÃ¢?Â¦
Terry: Ã¢?Â¦SMOKING POPES. There are just a lot of bands that we absolutely love that are from Chicago. It's cool to say maybe we're a chunk of those Chicago bands, but in reality we're not from Chicago; we're from Joliet.
All: We like to say Joliet as much as possible.
Nick: Adrianne CurryÃ¢?Â¦
Terry: Ã¢?Â¦Adrianne Curry is the only other Joliet person that's famousÃ¢?Â¦and Andy Dick.
Nick: He went to our high school.
Terry: He gave a speech at Joliet WestÃ¢?Â¦
Nick: Ã¢?Â¦about not doing drugsÃ¢?Â¦
Terry: Ã¢?Â¦and then a week later he was busted with Cocaine. No joke. That was Andy Dick in the flesh.

Take a chance on a band. Come to a show without any preconceptions. Just come and fucking rock.

If I left the interview open to say anything you wanted to your fans, or considering this CD may be the breakout for you guys, then what might you say to potential new fans out there?
Nick: Buy the record, please.
Terry: Come out to a show.
Nick: Yeah, come see us live and talk to us. That's the biggest thing. We love playing live'that's why we do what we do.
Terry: We're definitely a live band.
Nick: Take a chance on a band. That seems to not be happening. There are a lot of good bands out there, not just us, that a lot of kids never see and probably never will see because they get passed over all the time and end up breaking up, which sucks, and it's sad.
Terry: Take a chanceÃ¢?Â¦
Nick: Ã¢?Â¦Take a chance on a new band. Take a chance on usÃ¢?Â¦You won't regret it.
Terry: Come to a show without any preconceptions. Just come and fucking rock. Have a good time; don't worry about anything.

The Strays added to Buzzcocks/Adored dates