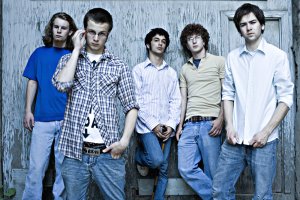 We recently had a chance to speak with Rody Walker of Canadian metal/punk act Protest The Hero. The band has had a busy year, with their signing to Vagrant, the worldwide release of their 2005 full length, Kezia and a tour with metal powerhouse Dragonforce.

How have things been on Vagrant so far? I know Rich [Egan] was very enthusiastic about you guys even before the deal was announced.

Yeah that was one of things we were really interested in about Vagrant, yâknow? A lot of people were interested in our record but Vagrant was really enthused with our record, which obviously made us more intrigued and wanted to sign - wanting to sign to them.

You guys have a bit of a reputation for being an obtuse political band.

What kind of - what makes you choose a topic to write about, sing about?Â

One element that I donât think you see a lot of in metal or hardcore is the dramatic element, we have a lot of Andrew Lloyd Weber-influenced parts, on this album, which some people find lame.

That came out a few years back so is it weird to be talking about it again and promoting it again?

Sort of yeah, we just released it this year, so itâs kind of like a weird grace period weâre in right now, where the albumâs finally out in the States and weâre promoting it again, so itâs definitely very strange because itâs been out for so long in Canada.

So how far are you guys along in whatever youâre going to do next, in terms of albums?

Well weâve been touring for a month and a half now, through the States and dipping into Canada, but weâve done Canada for the past year, over and over again. So Iâd say thatâs about a quarter of the way through the promotion of this album internationally.Â  Itâs really just beginning.

So youâre not even thinking about the next one yet?

Weâre constantly thinking about writing, because if youâre not creating, youâre just regurgitating.

Creation is something that is really important in our band, and sometimes when we canât be creating something, weâre the most stressed weâve been in our mini-career, so weâre constantly writing if not online, through programs, or in the back of the van.Â  We definitely started working on some new stuff, material, we're not sure if itâs for the new album or itâs just for demo-ing, fucking around.

How would you describe the albums and the themes of it?Â  Iâm just assuming that most of the people who are going to read this are going to be very new to you so - might as well give them something to go on.

I donât know if Iâd call it groundbreaking or innovative, but itâs really an amalgamation of our wide variety of influences. 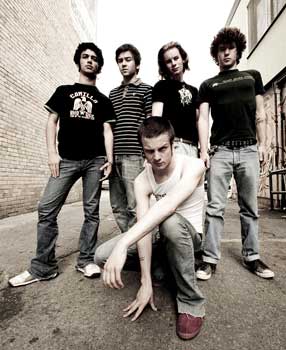 Lyrically itâs been described as a concept album, youâve got got three characters speaking throughout.

The lyrics are actually like - theyâre a large metaphor for our existence as a band, we donât like to classify it as a concept album because the sceneâs obviously saturated with these concept records that donât mean anything and donât have personal attachments to the bands, whereas ours is something very personal, and is something personal to every single member of the band, as it is essentially a story of our history.

People have called it a "situationalist requiem" or something like that, though that just sounds like - that seems like pseudo-intellectualism to me. We are constantly saying that it seems as though there are differences between a "concept album" and an "album with a concept" in this day and age, and weâd like to refer to it as an album with a concept as opposed to the ever-so-popular concept album.Â

You guys are from Toronto, right?

Some of us are, some of us donât, but right now we pretty much all live in our van.

And itâs a horrible van.

How do you feel about the Toronto scene as it is?

Thereâs a lot of needless drama I think.Â  Thereâs a lot of really crappy music going on, but there is a lot of great things happening as well.Â  Its kind of the same shit in a different pile as everywhere else, yâknow, like you take those kids from Long Island and all they do is throw down and wear stupid camo shorts and shit like that, and theyâre still in Toronto.Â

You take all the dumb emo kids with bad haircuts who look like little girls, theyâre still in Toronto as well.Â  Every little element of it is there, but there is an interesting underground with a slight amount of integrity, which is what makes it a little different than everywhere else.Â  Not to say that nowhere has integrity, but itâs been pretty difficult to find those underground kids with integrity on Yhe Blood tour.Â  Thatâs not a shot at The Blood, thatâs a shot at some of their fans.Â

(laughs)Â  I know what you mean, I always say in Toronto its hard for bands to come up because all the big bands are constantly coming through here so, if youâre a small band trying to get yourself known, youâre competing with NOFX as opposed to in other small towns.

And so it is in any city, which is really why you have to start out in the suburbs and build a substantial following.Â  We got our first substantial audience in a small town called Oshawa, which is one over from ours.Â  A little bit of word spread; eventually we were pulling the same size of audience as Toronto now that weâre on Vagrant Records.

(laughs) And as far as your relationship with Underground Operations, do they still own the record in Canada?

Weâre still very much on Underground Operations Canada.Â  A lot of the bands have been breaking up; going under, all sorts of things like that. However we have no intention of doing anything like that in our near future.Â  Our manager is the label operator.

So obviously weâre sort of obligated to him. Thatâs one interesting thing about the Vagrant deal, is they gave us Canada, so weâre not a Vagrant Canada-band weâre just a Vagrant-everything else.Â

I think itâs kind of important to keep loyall with your original family I guess.Â  Thereâs something to be said for a band who can keep their same original team from the start and not have to compromise with all the corporate negotiators and that bullshit.Â

Yeah, yeah.Â  How did you guys get on the [recent] Dragonforce tour, that was a surprise.

Yeah!Â  Apparently, we use the same booking agent as them, and they selected us from a few options after we were submitted, and weâre extremely excited to do it - Dragon Force is one of our favorite bands collectively, and we may get laughed off the stage every night, (laughs).Â  Theyâre musicianship suppresses ours, surpasses, not necessarily suppresses.Â  (laughs) But whatever, I think it will be a learning experience, and if at the end of the day we get laughed off the stage every night, at least weâll get to watch Dragonforce play every night.

How does it feel to suddenly be one of the more well-known indie bands in Canada to a band on a huge US label?

Itâs definitely an honour, Vagrantâs one of the labels weâve talked about since we were 12 years old right?

People always talk about Victory, Fat and Vagrant; we all knew about them, but didnât really know anything about them. But to have them flying down to LA and expressing any interest in us whatsoever is shocking enough, but to have them actually present us with contracts - its one of our proudest accomplishments I think.Â  If we crash and burn now, I think today weâll say "whatever, we got signed to Vagrant, it was an honour while it lasted."

So are you guys going to be supporting Dashboard Confessional anytime soon?

(laughs) I donât think so, but if they asked us, weâd do it.Â  Just to piss off our fans.

As for Vagrant, itâs just how it is, weâve all accepted it.Â  It does come with this weird connotation, like every time we walk into the office they laugh at us and call us Canucks and things like that. However we take the punches as they come.

And though our faces are black and blue, we still look as pretty as ever.Â  That was a horrible analogy, my apologies.Â

Well I mean thereâs a handful of bands from around here in Ontario that have kind of broken out in the states, not just the mainstream kind like Sum 41, but Alexisonfire, and stuff like that.Â  Do you guys feel a kinship or something with those guys?

I donât know if Iâd say "kinship", weâre starting to feel more on a peer level with them.

Not necessarily just yet, this is our first states tour, weâre not drawing a massive audience or anything like that.Â  But definitely just being involved with this market and being one of those smaller Canadian bands, slowly progressing their way through the market, you do feel some element of being on the same level with those bands. 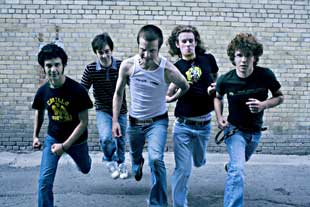 Do you think weâre going to see you at the Junos in a couple of years?Â

(laughs) I dunno, they submitted us for two of them this year, however, we got rejected horribly, but Iâm glad for it.

What do you guys have in store for the year besides these tours that coming up?

Weâre talking about taking a good chunk of time in November and December to start writing the next album, just renting a house and living with these four other monsters of people.Â  I hate them all very much (laughs).Â  That will be somewhat of a break, one of our firsts for this year.

So thatâs pretty much where weâre up to.Â  Weâre going to tour up until then.Â  Then have a nice Christmas/Hanukah or Kwanza