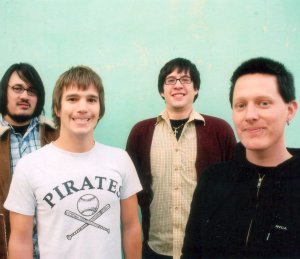 It's always hard being a new band trying to get your name out in today's saturated punk scene. There are thousands upon thousands of bands flooding the scene, and many great bands have disbanded long before anyone even knew they existed. One of Nitro's newest signings, Hit the Switch, has a plan to make themselves known, and it won't cost music fans a dime to check them out.

In a fashion similar to bands like Bomb the Music Industry and Defiance, Ohio, this California four-piece will be releasing their debut full-length, Domestic Tranquility and Social Justice, through iTunes free of charge in two parts, even though they are on a very legitimate punk label. While any band can release music for free, this album is a high quality punk record that holds it's own with other Nitro acts like A Wilhelm Scream and No Trigger. Guitarist and vocalist, Matt Hawks, took some time to explain their plan and introduce the band to the Punknews community.

To begin, seeing as this is a debut release, how did the four of you guys meet and where did the inspiration to start a band come from?

Well the inspiration to start a band came first, sometime in high school. I decided that all I wanted to do was make music. Hit The Switch started in 2001 with the release of our first EP. We immediately started losing band members one by one, and the current line up was collectively compiled while replacing those members. I met Ray (bass) while playing Counter-Strike, met Scott (drums) through our old guitar player, and finally met Joel (guitar) through Scott……. 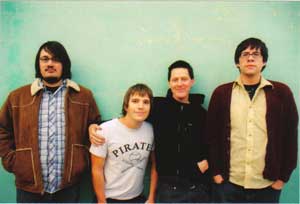 [Laughs] My brother would be proud that you formed partially through Counter-Strike. As I hear many others have, he has fallen prey to its addictiveness.

Yeah, I was very addicted to that game for awhile, too!

So, were you involved in high school band or anything like that?

No, I wasnât involved in band at school, but I did start my first band in high school (called "Contrast Kids") with my buddy, Mikey Rivera.

And then you named this band Hit the Switch becauseâ¦

Iâm not sure why we decided to go with such a lame name. I must have been pretty high when I supported that idea.

Domestic Tranquility and Social Justiceâthe record was self-produced about a year ago, and is now being released on Nitro Records. How did the signing with Nitro come about?

We are the rare exception. All we did was send them an online press pack (which usually gets lost among millions of other demos) and about 3 months later, we got a call from Sean Ziebarth. We are very fortunate to have been found that way.

Speaking of rare, Iâve heard you were one of his first signings that wasn't a direct recommendation of A Wilhelm Scream.

Yeah, we have no affiliation with A Wilhelm Scream. Joel (our guitar player) met them once at a show after we had signed to Nitro. Joel was so excited to meet âem, but they didnât seem to want to know Joel [makes sad face].

So, what did Sean say when he called you guys? Was there any choice in signing, or as soon as Nitro showed interest, you were in?

It was pretty cool when Sean called me for the first time. I was very surprised, but I tried not to sound too lame. We had some interest from a few other labels around that same time, but we were all most familiar and interested in working with Nitro. Sean made us feel very comfortable from the very beginningâalways down to talk or go out to lunchâ¦just like a real friend! [smiles now] 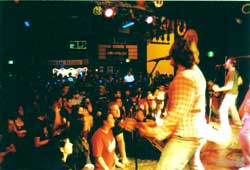 I don't know how much you're allowed to divulge about a record contract, but I assume with the free release of this album, you guys have a record deal that isn't exactly the norm?

[Laughs] Yeah, our deal is a bit different, but basically the same as most other Nitro bands. We are just lil guys in this industry, though. We have a lot of developing to do.

How did the idea to release it online for free come about? To me, it seemed a little less than coincidental that this is happening on Nitro, what with the Offspring's backing of Napster back in the day.

As a result of insanely condensed competition, retail isnât exactly the ideal way to go with our first release. Nobody knows who we are yet, so why put the record on the shelf? We want to create some kind of swell by allowing people to download our record for free. We'll see how that goes soon….

Iâm not sure why we decided to go with such a lame name. I must have been pretty high when I supported that idea.

Well, how did you approach Nitro about this release concept, and how willing were they to take to it?

Oh, well, they kind of approached us with this explanation of how retail and distro were really crazy competitive and expensive, so we decided together that skipping the whole retail thing was the best idea for us.

Why is it being released in two parts, as opposed to one solid album?

To keep the anticipation rolling. If people enjoy half of the record, they will stay tuned for the rest of the record. We want to keep people interested by constantly providing new things.

Obviously, people reading this might be wondering, where they can download the album when it's all released? [first half, July 18th]

A band like Bomb the Music Industry has been making a point to put out all their records for free, with donations accepted, but thatâs because theyâre opposed to the workings of the music industry. I assume your plan was more to get the first record off the ground and your name out there. Do you think this may cause any long-term problems down the line, where fans may be like, "You mean I have to pay $10 for this one now?" when you release a second album?

No, I donât think it will cause problems down the road. I bet most of the new people that hear about our next record wonât even know we gave away the first one.

Back to the album, I don't need to ask why you called it Domestic Tranquility and Social Justice; it's very obvious that the whole album is all about the social issues of our time. I don't even need to ask what influenced it. Why is it important, though, for you to get these lyrics out there? Do you just feel the need to write about these things that piss you off, or do you think the music can really make a change?

I write about what matters most to me, my convictions, and I feel that music is the best way for me to project my opinions and beliefs. Music has had a substantial impact on the counter-culture in the past; I hope to be a part of that in the future.

Is "Mr. Abrasive" a representation of the attitude of Hit the Switch?

"Mr. Abrasive" represents hypocrisyâan aggressive annoyance that deprives us of enjoying our free will……I donât think it represents our attitude as a band, though.

The best way I can describe your music is the most melodic in-your-face punk I've heard, with some metal-esque guitar parts. Would you say this is a somewhat accurate description, and what bands have influenced your style?

Well, thank you Bill. Thatâs actually pretty accurate. I wouldnât say we are influenced by any specific bands, but we draw inspiration from many artists and try to soak up as much diversity as possible….but we donât want anyone to mistake us for anything else but a punk band.

I don't think it's possible for there to be a mistake once people have listened to you. Itâs definitely punk, and your lyrical intensions are fairly straightforward.

As a result of insanely condensed competition, retail isnât exactly the ideal way to go with our first release. Nobody knows who we are yet, so why put the record on the shelf? We want to create some kind of swell by allowing people to download our record for free. We'll see how that goes soon….

You do a lot of touring in your Cali-area, but while you're not going to make money off this album, I'm sure it's hard to do much more right now. Do you have hopes of doing any more extensive touring to support this album?

Yes, we are touring all over the western states all year, and itâs pretty tough at this point. We all still have bills and other jobs we are trying to maintain, but at the same time, I wouldnât want to be doing anything else.

Not to rub it in, but the album's not brand new. Since it was finished, where do you guys stand with new music? Basically, assuming your deal was more than one record, when should fans expect a follow up to Domestic Tranquility?

Yeah, itâs weird having this record sit here for so long and itâs just now getting released. We already started writing the next album, which is coming along amazingly well. We are very stoked and anxious to see where these next couple records take us. 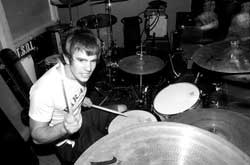 So far, how does the new music youâre writing compare to Domestic Tranquility in terms of topics covered and style?

If there is one important thing about the band that I overlooked and you wanted to get out there, what would it be?

Ummmmmmmmm…….yes. I would like to address whoever is reading thisâthank you for taking the time to read through this whole interviewâwell done. You can check us out at hittheswitch.net or myspace.com/hittheswitch Cheers!
(Source: Personal Interview)

Tim of Rise Against joins Top Welt! for Episode 12