With his recently reunited post-Black Flag musical endeavour The Rollins Band set to hit the road tomorrow, it seemed like a good time to have a quick chat with Henry Rollins and talk about the tour, his ongoing television show and for no reason whatsoever, William Shatner.

The legendary musician and popular spoken word artist will be on the road for a month with support from the equally legendary X and punk rock upstarts Riverboat Gamblers. Dubbed the As the World Burns tour, it will kick off Cabazon.

Recently you've been touring as a spoken word artist, and also hosting a weekly television show. By all accounts, you have quite a bit on your plate. Why the decision to reform the band now?

[I] never felt all that aligned with the scene. Quite the opposite actually. When I saw how much conformity there was and that the idea of some peopleâs PR paradise was getting wasted and not doing much, that immediately alienated me from it.

The "now" you refer to actually happened several months ago. Phone calls circulated and the band assembled without me and played a few days to see what it was like and everyone seemed to like it. I went out to NYC where they all were and joined in and decided I liked it. Hopefully thereâs something there. It feels that way. I know I was missing being in a band and itâs great to be with these people again.

Conversely, since you did form the Rollins band fairly soon after Black Flag split up, it seems like the past few years have been the longest break you've done since music after almost twenty years as a touring musician. With the exception of the WM3 benefit, it's been a long break from music. Any reason why?

I wanted to do other stuff and see what it was like to not be in a band for awhile. It was strange at first and I never got used to it. It did give me some time to work on other stuff and thatâs been good. Perhaps it will allow me to bring more to the table with the band. I would rather be in a band than not but I wouldnât want to just be the guy in the band unless I was as good as Bob Dylan or something.

You've become a staple of punk documentaries (like the recent Minutemen piece) but otherwise much of your work has been more mainstream rock and entertainment oriented. Do you still feel connected to the punk and hardcore communities? Is there even one? 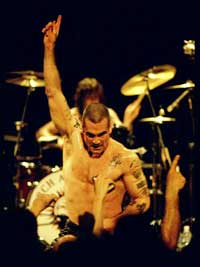 I was there for some of the writing of the Punk Rock chapters in the big book but never felt all that aligned with the scene. Quite the opposite actually. When I saw how much conformity there was and that the idea of some peopleâs PR paradise was getting wasted and not doing much, that immediately alienated me from it. Also the whole "you sold out" thing. When someone who has not the balls to stand up and go for anything tells you that youâve sold out, itâs extremely hard to take seriously and hard to feel any affinity with. A lot of those ideals are unsustainable unless you live with your parents and donât always take a lot to stand up for. There are, however, a lot of people who are doing great things, music, labels, websites, etc. Itâs not Punk Rock that got them there. They got themselves there. An ideology wonât get you far.Â

You've always been political, but you've come out as a strong advocate for gay marraige, perhaps the most vocal you've been about any one issue. Why does this one issue - as important as it is - stick out for you?

Iâm more vocal about the invasion of Iraq and the Bush crime Family but the gay marriage thing really bugs me. I have never heard one single gay person ever say they left the hetero world because they thought it was too boring or the grass was greener or they thought it would be cool or a new experience. They say shit like they knew they were attracted to the same sex by the time they were 8 or something. So, when people who will never meet them or have to deal with them feel the need or sense of entitlement to instruct them how to live, it makes me furious. If I were gay and someone told me I could not love the person I was into or that there was something wrong with me, that guy would be waking up saying, "That faggot just kicked my ass." These hateful people better remember the country theyâre currently paying taxes in and also that freedom bears a heavy weight and they canât be allowed to only carry the parts that suit them.

I've really been enjoying your show, particularly your choices of guests (music and otherwise) I'm wondering how the show happened and what kind of direction you give to the project. With more "liberal" political shows like the Daily Show hitting the mainstream, what do you have as goals for your show?

The production company that does the show came to my manager several months ago with the idea. I thought it would be interesting to try. We made a pilot and IFC thought it was cool and we went with it. My goal is to make the show as good and as interesting as possible. Iâm sure thatâs what Jon Stewart is trying to do. I am nowhere at that level but it doesnât mean we canât work really hard and make something good.

Heâs a kind and energetic man. I have hung out with him a few times since and heâs always really cool and interesting. Heâs different, thatâs for sure. I like him.

One question that many Black Flag fans is whether you've ever considering working with Greg on some reissues. By all accounts, those albums are classics and are quite worthy of some sort of deluxe treatment?

There are a lot of outtakes and there could be some interesting tracks for those who are interested. Also, I bet you could re-master that catalog and have it sound a whole lot better than it does now. Itâs Ginnâs label and his band and he doesnât talk to me. I was one of four singers and donât really feel all that much a part of the band. I was there for some of it though and I think we did some good stuff but as far as re-issues go, thatâs for him to do not.

These hateful people better remember the country theyâre currently paying taxes in and also that freedom bears a heavy weight and they canât be allowed to only carry the parts that suit them.

Iâd rather listen to vinyl.

Few of your musical peers have been able to make the stylistic and generational shifts you have made into other forms of media, why do you think you've been able to pull it off?

I donât know if Iâve pulled it off but I have managed to stay in it pretty well. Itâs all I do so that is at least a big part of it. No wife, kids or family, addictions or stuff like that so I just work away. That probably has a lot to do with it. Iâm not very good at any of it, which no doubt many are very quick to point out.

You turned 45 this year, and as I mentioned, you're as busy as ever. What do you hope to do in the next few months and years? Do you make long-term plans? 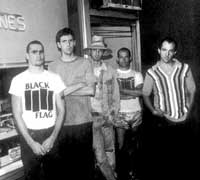 I plan an entire year by about February of that year. Itâs the nature of touring. If you want a certain venue at a certain time, youâre most likely not the only one so you better put your request in sooner than later.