Horse The Band has detailed their new five song EP, Pizza. The 5-song disc will follow the band's 2005 Combat Records debut, The Mechanical Hand. The album is due out September 5th, 2006.

While a track listing is not yet available, the band had this to say, which can be taken with the appropriate grain of Parmesan:

Some tentative songs are "Crippled by Pizza", "Werepizza" (like a werewolf but just a kid with really bad acne whose face looks like pepperoni pizza), "Pizzarrhea in the Pizzaria", "Antipizza" (pizza made out of antimatter), and "Pizza Knife" (the heavy song). Also we will include our cover of the Teenage Mutant Ninja Turtles theme before Evergreen Terrace starts playing it and because the turtles love pizza. And we might put a song on there called "I Ate Her Pussy Like a Pizza". And "Hold the Anchovies duuuuuuude!"

The artwork as promised, does resemble a pizza box. 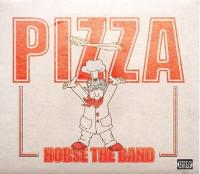 The Hurt Process cancel all shows, possibly break up