Since popular Christian hardcore/metal act Underoath dropped off the Warped Tour at the end of the last week, there has been much speculation about the reasons behind it, among the rumours reasons was that NOFX vocalist Fat Mike was somehow involved.

Mike offered us a statement explaining the situation. 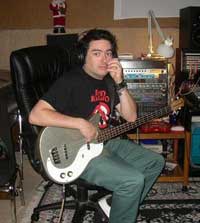 "Sorry folks, as much as I do like controversy, there really isn't any to report on this subject. Underoath have left the Warped Tour, and as much as people want to give me credit for that, the truth is they just really needed a break apparently. Some people have suggested that they bailed because I made too much fun of them (I kinda did). Problem with that theory is that I have made fun of plenty of bands on this tour i.e. Against Me, the Blackhearts, Anti-Flag, Sherwood, The Acadamy Is, Thursday, Less Than Jake, Rise Against, etc. I have also taken plenty of jabs at Christians, Jews, Buddhists, and Muslims.

I feel I am an equal opportunist when it comes to getting laughs from an easy target. One thing I really try not to do is make fun of bands that I'm not friends with. That*s why two days into the tour, I introduced myself to the Underoath guys and we have been friendly ever since. Of course we have some differences. They tend to not believe in evolution, dinosaurs, reproductive rights, premarital sex, or gay marriage. Some of them don't even like looking at porn (that*s just crazy). The point is, at some point I sat down with most of them and had quite a few discussions about a lot of these issues.

Every talk we had was civil and respectful and no matter how wrong I think a few of those guys are, there were never any hard feelings between us. They*re actually really nice dudes. Maybe on their summer break they could spend some time reading some other books, instead of just the one." - Fat Mike