by Brian Shultz Side One Dummy Interviews 15 years ago

Around what time did the Jack Kevorkian portion of the band name get the heave-ho? Did it have anything to do with the Hollywood signing?

No, no man. We were called Jack Kevorkian back in 1991. We changed the name around `95 to the Suicide Machines. It wasn't so much a legal thing as it was everyone always got the name wrong, or we were too lazy to spell the whole name out on the bills. We would spell Kevorkian wrong, or they'd just put Jack Kevorkian, or they'd just put the Suicide Machines, and our nickname around Detroit was pretty much just the Machines.

With the Skank for Brains split, we weren't even supposed to put it out under Jack Kevorkian; we were told not to by his lawyer, and we did it anyways. So we really didn't give a crap about the legal repurcussions. We just got to the point where it just seemed like the right thing to do.

Do you regret writing a song about shoes, no matter how fun the song may be?

Ahh, you know what man, we've always had a few goofy songs. I don't particularly regret it. You know, I have a real hard time with…shoes… 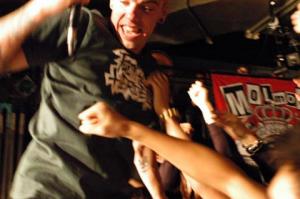 I don't know, everyone loves that song. Maybe that's the irritating thing -- sometimes you don't want to play certain songs from back when you wrote them, but everyone seems to really love that song, so I don't particularly regret it.

Both Destruction and Battle Hymns were fairly abrasive by major label standards. Did you really have complete creative control at the start?

Yeah, absolutely man. Beginning to end, both of those records.

My huge beef with Battle Hymns [though] is that we only had 3 and a half, 4 weeks to write that whole record because we toured so much. It was tour after tour after tour and it came to the point where we had to be in the studio in December [1997]. We got home in [late] October and I'm like "Dan, we gotta be in the studio in 4 weeks…" [laughs] We had like 5 songs, [saying to ourselves] "Fuck!"

I wish we had a lot more time. I think with Battle Hymns we could've made a better record in the end, but we just didn't have the time.

And you still managed to write 20+ songs for it anyway…

Yeah, I don't know. I think we could've written better ones, that's all. I think that we were onto something good for that record, but then we just didn't have the time to really completely fulfill it.

Whether or not the band's main influence at the time was Operation Ivy, what were some of the other bands influencing you guys at the time?

You know, what's funny is that OpIvy [wasn't necessarily at the center of those influences]. There was a lot of other things -- like me and Dan were heavily into the Specials, Bad Brains and Negative Approach. To us, that's like…where the main [influences were]. A lot of people think it's an OpIvy thing, and I mean it is, I'm not saying it's not, I'm just saying that there was a lot of influence from definitely those 3 bands. A lot of people probably don't know that, but…

Yeah, I wouldn't think it would be that limited [to OpIvy].

Yeah, no, not at all. Dan and I were raised on a lot of Michigan punk rock and hardcore. That's where the Negative Approach thing came in.

I don't know, you guys are kind of taking me for a bit of surprise by asking me about this whole thing being an important record and stuff like that, so… I mean, I'm honored, I'm just saying… 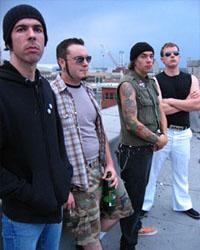 I know my editor did research for the whole thing, and he asked a lot of people -- I saw the "surveys" go on for it, and this album just kept coming up in like every list, so it was like…we gotta include it…

That's crazy. I mean, that's cool… I would never think…

I mean, he was asking punk rock fans to name 10 albums they loved in 1996, and it was a repeat thing.

What were the other records? I mean, I don't remember that year very good…

I know Less Than Jake's Losing Streak I think is gonna be there…one of the first Goldfinger albums, I don't remember which one…Texas Is the Reason - Do You Know Who You Are?…I can pull up the list now if you want, I mean…

No no, that's alright, I was just curious…I don't need to know every one, I just barely remember 1996.

I think maybe one of the Reel Big Fish albums, maybe MxPx…I know there was a few in there…

Well I mean, any of that stuff. It could be considered that collection, Fresh Fruit…I mean, every single Dead Kennedys record was a huge influence on [me]. I love the Dead Kennedys, and the way that they put their songs…beginning to end, and that's what I always really loved about them. I wish I could've accomplished that more.

Not mine, man. Not mine, I mean that's my ass on the cover [laughs].

That's the last thing I ever wanted to see was my butt on the cover of our record, you know what I mean?

And every frickin' poster I ever saw was like "oh god…" 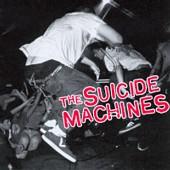 I can honestly say that was a record label decision. We kept coming up with all these covers and everybody hated them, including band members and finally they're like "Dude, we really have to release this thing in 2 weeks." So when it was time to do it, we didn't have a cover, and someone at the label put this live photo. Everybody was like "Yeah, that's it!," and I was just like "Nooo dude, my butt [for the cover] is fucking lame…" Everybody was like "No, no, that's it." Like why does everyone want to see a big ol' butt.

It was ridiculous. I thought it was boring to be honest with you. I mean you've seen live shots of hardcore bands with like…

…people's faces in the crowd screaming along and you can see the rest of the band… It's like no, there's my butt.

So no, I wasn't too stoked on the cover. [laughs]

Was the Steal/self-titled backlash as bad as people think?

No, not really. I mean, the self-titled really sold a lot of records.

Everyone went on this big Beatles trip. They really wanted to like, be like the Beatles all of a sudden in the Suicide Machines. It was a really weird time for me -- a pretty uncomfortable time for me, because I was fighting with everyone because they were writing songs that sounded like the Beatles and I just wanted to write punk songs.

But the backlash wasn't really bad, if anything the backlash was… The most backlash we ever had was pissing off radio stations and stuff like that. You kinda dug your own grave with people that way. So we didn't really want to play the major label game, and so we were pissing off K-ROCK and all kinds of people, doing silly shit because we didn't really give a fuck… So maybe there was more backlash in the world of people distributing the record and record stores and radio stations and stuff. That was more backlash than anything.

And Steal This Record, there was a lot tepid songs on that. It was a really [tense] time in the band where everyone was hating each other, and I think you can tell on that record. You asked me about writing songs about shoes, there was some pretty ridiculous songs on [Steal This Record]… [laughs]