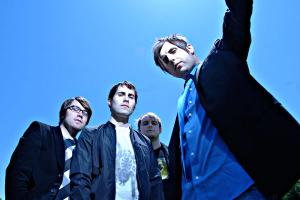 by Adam White Victory 16 years ago

Popular Dayton, Ohio based act Hawthorne Heights have announced that they are parting ways with Chicago based label Victory Records. In a statement posted on their website the band airs a number of grievances with the label regarding promotional tactics and royalties among other subjects. The band has also filed a lawsuit against Victory, the full 50 page document is available via Alternative Press Magazine's article.

Hawthorne Heights released The Silence in Black and White on Victory in 2004. It was followed up with this year's If Only You Were Lonely. The promotion for that album proved controversial, as pre-release fan communiquÃ©s made impassioned pleas to "take rock music back" and reportedly advocated that street team members rearrange store displays to help the band's first week sales. The album did debut at number 3 on Billboard's chart, but the street team directives raised eyebrows among industry watchers. The band comments on this incident in their statement as contributing to the "the final straw in a huge pile of hay that broke our backs."

Victory has been dogged with controversies following the departure of their most successful acts. Accusations flew back and forth in 2002 with the departure of Thursday and to a lesser degree later with Taking Back Sunday.

Many of you are familiar with the greed driven letters sent out by Mr. Brummel: his manifesto calling rock supporters to arms and virtual declaration of war on hip-hop and Ne-Yo done under the guise of a band message; as well as the "street-team" letter which instructed people to re-arrange our CDs, putting them in higher visibility areas in stores. Unfortunately, the head of street-team, Abby Valentine, who understandably resigned following the incident, took the fall for this.

At the time of the letters we were branded as racists by some, all over a letter we did NOT write, targeting a genre which we have NOTHING against whatsoever. Because of these letters, our second album debuted at #3 on the charts, an incredible feat, which would normally be cause for joy, but now is tainted much like Barry Bonds' statistics.

When questioned about the letters Tony was more upset that we had told the press that he actually wrote the letters (not us) because he was more worried about "rumors" surrounding Taking Back Sunday and Thursday's exoduses being justified than the credibility and reputation of his current biggest band.

Couple these letters with him threatening the head program director at Q101 in Chicago for putting the new Taking Back Sunday song into rotation to the point in which the program director pulls "Saying Sorry" from rotation and you can see why we would more than question whether or not the head of our label cares about us or his own ego more.

Tony is a man whose greed knows no bounds. After selling more than 1.2 million copies of The Silence In Black and White and If Only You Were Lonely, we have never seen a single dollar in artist royalties from Victory Records. Tony will claim that we have not "recouped," a term used by those in the music business which means the label has spent more money in advertising than has been made by CD sales. In fact questionable accounting practices are the culprit and we are in fact owed substantial amounts of money much like audits from Taking Back Sunday, Thursday and Atreyu have uncovered.

You may be wondering, why now? Why did they wait three years before saying something? Why did they sound happy in that interview??? Like being in an abusive relationship, we let certain things slide as we were afraid, as many of the bands on Victory are, to stick our neck out for fear of being "beaten," in this case represented by the threat of not being promoted as has been the case with certain bands on the roster. We're done being abused. The reasons stated above represent the final straw in a huge pile of hay that broke our backs.

Undoubtedly Tony will proclaim that we are ungrateful and our success was due solely to "his" promotional efforts. In reality, promotion is only a portion of the equation in a bands success. Even then, in our case especially, promotional efforts can be attributed the hard work of the band and staff at Victory, many of whom recently resigned or were fired due to differences with Tony. Non-stop touring, dedicated fans and songs (we challenge Tony to sell over 1 million blank CDs) account for the rest of the equation.

We've accomplished more in three years than most bands do in a lifetime and for that we are extremely grateful and consider ourselves very fortunate. Our situation with Tony Brummel is indicative of issues that all bands on Victory Records encounter on some level or another.

We have decided to remove ourselves from the negative situation so that we can continue to do what we love best and focus on writing and playing music to people that care about what we have created.