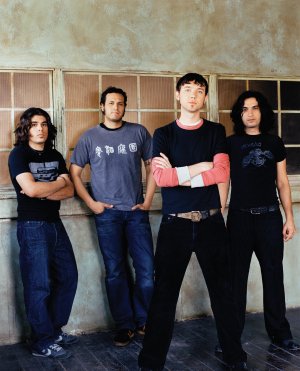 Earlier this week, Sparta released their third album, the appropriately named Threes. I had a chance to speak to frontman Jim Ward about the record last week while they were in Burlington, Vermont.

Jim told me about the process of making the record, the departure of guitarist Paul Hinojos who had been playing with Jim since the At the Drive-In days, and even addresses some long-standing questions about Sparta, and last year's At the Drive-In retrospective, This Station Is Non-Operational.

So this is your first tour with a brand new guitarist. How is that working out?

Was it strange to add someone? Youâve been playing with Paul Hinojos for more than ten years so I imagine that was weird.

We were on Geffen for the last record and we were pretty much ignored. Our contract was up and we left. Weâd rather take our chances in the world instead of staying where weâre ignored.

Every band Iâve been in has had lineup changes so itâs not as weird as people would think. It changes things, but itâs totally cool.

For the new one, how did you go about writing?

We all got together at this warehouse in El Paso and we spent two months hanging out and getting to know and re-know each other. We allowed the band to change with the new member and it was very organic.

Your last album has a pretty strong lyrical theme in that you were dealing with a tragic loss. [The death of cousin Jeremy Ward.] 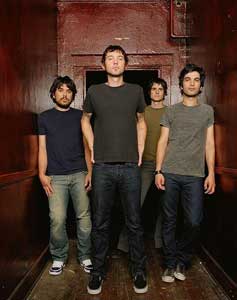 There was a lot of grief in the last record.

Is there anything in particular that inspired this record?

Well, I left Sparta for a while; left touring and took some time off. I got a new perspective on things and the record is more hopeful. Itâs about life but in general, itâs hopeful. The first word on the record is "hope."

I think that while the music is darker than stuff Iâve done before, but lyrically there is this genuine, better outlook.

Youâre on a new label too.

We were on Geffen for the last record and we were pretty much ignored. Our contract was up and we left. Weâd rather take our chances in the world instead of staying where weâre ignored.

Luckily, after a couple of months of going to meeting we settled on Hollywood. It was under the assumption that they would let us make whatever record we want. As long as we have artistic control weâre happy.

They wanted to rebuild their label and bring in some more credible "rock" bands and thatâs us I guess.

You guys are definitely taking advantage of that freedom with the short film you packaged with the album.

It was in the works before we signed a deal with anybody. We wanted to make something visual that wasnât necessarily a documentary about the making of the record. We wanted to do something more creative and after brainstorming a bit, we came across this idea of loosely basing something on Tony [Hajjar]âs childhood. He really has a pretty fascinating story.

Heâs a drummer and it gets overlooked a lot in the press. Itâs not usually the story people write about it. Itâs such a fascinating story and such a heroic tale. Itâs sad, but hopeful.

[The film, Eme Nakia, is about drummer Tony Hajjar's personal history, set during the Lebanese civil war of 1975-1990. Hajjar fled at the age of five to the United States, settling in Texas border town of El Paso. When Hajjar was fourteen his mother, Nakia, died after a bout with cancer and his father, who had been distant, left the family. His brother, only 18-years old at the time, assumed responsibility for the family and raised Tony and his sister. The film follows Hajjars early life story, showing his challenges and ending with him in present-day.]

Itâs interesting because Lebanon has been in the news lately.

Right when we finished the movie, it started again. When we started doing press it came up quite a bit. Itâs unfortunate because Tony really never wanted that to happen again.

Right when itâs coming out, heâs talking to his relatives on the phone and theyâre hiding in restaurants because there are bombings outside.

Youâre not really a political band, has this been seen as political project?

Weâre not a political band, but weâre all politically active. Especially Tony and me - I donât like to be pigeonholed as far as being a political band. I donât want to make a record thatâs 100% politics. Politics is part of my life but itâs not my entire life.

I use the band and the microphone thatâs given to me to do what I will, but I donât want to make my whole art reflect that.

Whatâs happening with your [alt-country] side project, SleeperCar?

I hope weâll finish the record at some point. I should mention that we all have side projects. Tony does stuff under the name Nakia and Keeley [Davis] has a band called Glos. Matt [Miller] is working with some hip-hop guys. I think next year as we get into the flow of doing this tour, other stuff will start coming out.

I just did a record with a poet thatâs coming out.

Yeah, Keeleyâs record comes out in January. I hope SleeperCar is done next year, Iâve been working on it for so long Iâm losing interest in it almost. Itâs been four years.

Though Itâs not like Iâve been working on it for four years straight. Itâs just taken me four years to finish I spent a lot of time on the Sparta records.

I promise this will be the only question about this, but last year you got together with your former band [At the Drive-In] to put together a retrospective compilation. I was wondering how you guys chose those songs.

People kind of emailed in and suggested songs, and I was just adamant about certain things staying off it.

There was just some stuff I wanted to stay special, like those early seven-inches. If you have them, then you have them because you were in a certain place at a certain time. I wanted to keep it special for those people if it makes sense.

Itâs not that theyâre embarrassing to me, itâs because I wanted them to remain intimate with those people who were there when we slept on their floors. We were putting out 500 seven-inches even though people sell them on eBay for more than I had to put them out with.

I still prefer it that way. I like that culture; Iâm part of that culture. I didnât want everything homogenized into one album. Iâm not a big of "greatest hits" or whatever, but I understand thatâs part of what labels do. I wasnât really a big part of it to be honest with you.

Speaking of those seven-inches, you started a label back then (to release Alfaro Vive, Cajaro!) and you now have a imprint with Doghouse.

Itâs called Civil Defense League and the Bobby Byrd record is coming out on it. Thatâs the first thing and Iâm doing a record with Clint Newsom who used to be Rhythm of Black Lines (GSL) and he has this fantastic record under the name Reflections.

I would love to have more records from people just getting together and making records and not worrying about press kits and all that.

When did this click for you, that you wouldbe a musician?

I think about it all the time, because I was at my parentâs church for some holiday; Christmas or something like that. I hadnât seen all these people since I was a kid. I was 22 or 23 and I had been on the road for maybe four or five years.

We hadnât made any impact at this point and so all these people were coming up and saying "Itâs great that you have this band, but when are you going to go to college?"

They didnât ât really understand my world, and my dad put his arm around me and saying "Youâve learned more in the last four years than you ever would have in college." He respected what I did and that was a weird moment. All of a sudden he was saying that I had "graduated" and he considered me a professional at what I did. 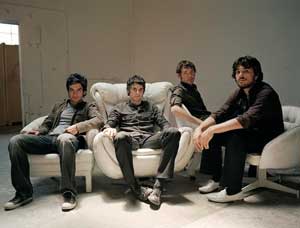 It was pretty weird actually. It was great though.

Where do you feel Sparta fits in your musical output?

When I think about this record that we made, I realize itâs for people who are my age. People who are turning 30 get it more than anyone else.

I canât really register the difference between this band and myself anymore. I play with other people and everyone contributes but I never gave it everything I had before and this is everything I had.

I made a firm commitment to this record to become "obsessed" with it again. I hadnât been really enjoying myself, for the last couple of years, there was some times when I wondered how long I could do this because I wasnât having fun.

Before I found that perspective, I went through this hard time, leaving the tour and upsetting the guys, which no one wants. The end product is much more honest and much more real.

It definitely sounds like you found your voice, both literally and musically.

The one that I had on this record that I said before we started. I told myself that if I donât get better at writing songs - which is the end goal for me. I want to die a good songwriter. Thatâs my dream and if Iâm not working towards that, and I donât feel like Iâm accomplishing that, then I donât want to do it anymore. Then Iâll find something I can excel at.

I donât do this for any other reason that I love it, so if Iâm not feeling some sort of emotion with it, then I wouldnât want to do it.

Itâs returned, but it was gone for awhile.

I was just adamant about certain things staying off it. There was just some stuff I wanted to stay special, like those early seven-inches. If you have them, then you have them because you were in a certain place at a certain time.

Those arenât things you sit down and nick, but I surrounded myself with things to find my life again. A lot of that was going through my old records and falling in love with music again. It wasnât so much getting up at 9 and four interviews and sound check and then a radio block. You do that over and over for ten years and you start to forget why you like music in the first place.

You mentioned the stresses of touring. Do you record so you can tour or do you tour so you can record?

Iâve never had one without the other so I donât know which one Iâd miss more. Both of them are equally great and equally hard.

People always ask if "Bombs and Us" was about Elliot Smith.

I was watching MTV News and it was one of those times when it was just me and my wife in my house. I donât really watch MTV because itâs all reality shows, but they were showing the reaction to Elliott Smith dying. I didnât even know he had died, and it had been about four days since it happened.

I immediately went downstairs and wrote that song because I wished so badly that I had met him. It was kind of stupid, but I kept thinking that if I had been a friend, it wouldnât have happened.

He was a really heavy and emotional part of my music collection. A really personal part of it, and he was one of those artists that you felt like you knew. I always admired him.