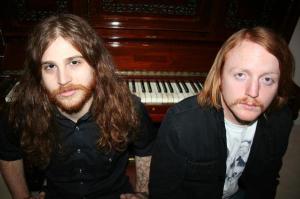 by Aubin Paul Contests 15 years ago

Our friends in Casket Salesmen recently released their debut full length which marked a stark departure from the post-hardcore of their former band, A Static Lullaby. Infused with touches of hardcore, metal and rock. The album, Sleeping Giants is drawing comparisons to everyone from Bleach-era Nirvana to Queens of the Stone Age and King Crimson.

The band and their label offered to give away a pair of new shoes, a CD prize package and a whole lot of other merch. Check out the record and then get your name in the running.